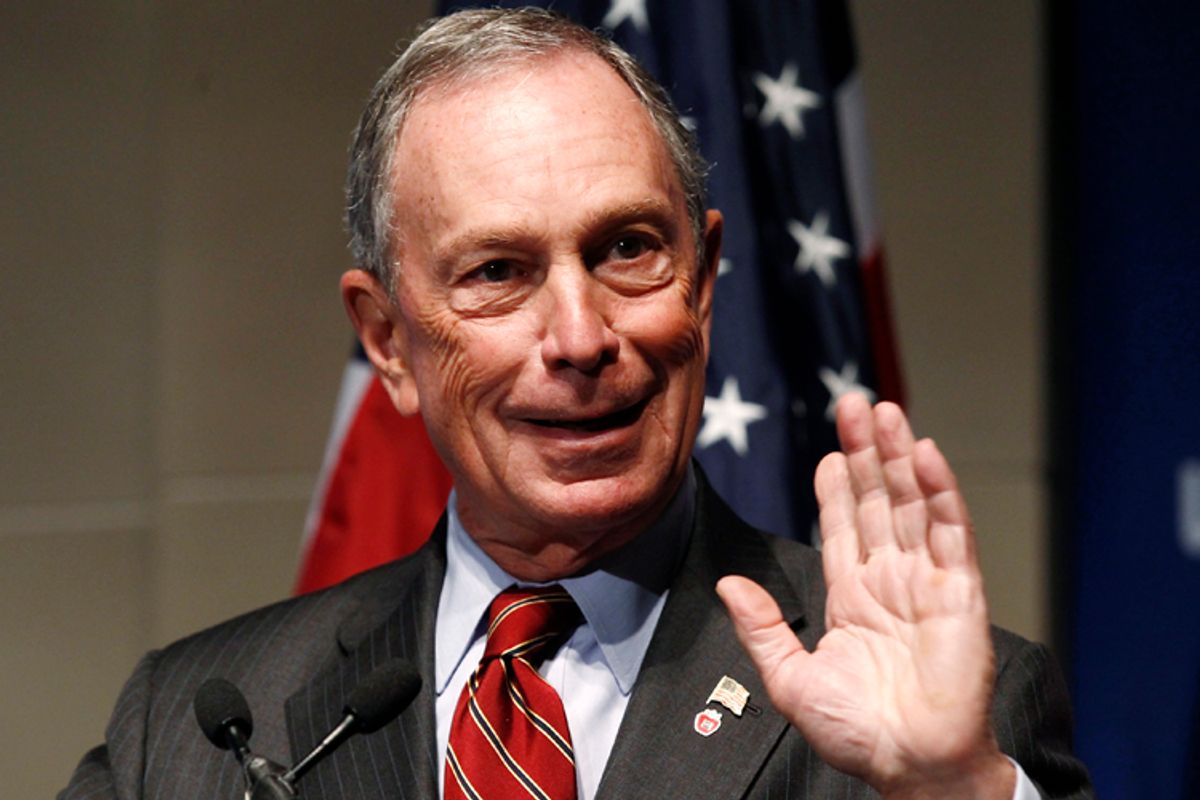 On Wednesday, accomplished table tennis player Greg Smith announced in a New York Times Op-Ed that he was quitting his job at investment firm Goldman Sachs, because the firm's "culture" has become, at some point in the last 12 years, "toxic." Goldman Sachs responded with a spirited P.R. campaign in which it claimed that Smith was not actually a very important person to the firm, and a leaked memo from Lloyd Blankfein in which he argued that Goldman could not possibly be evil because a recent internal survey proved that Goldman employees enjoy working at Goldman.

Despite that very good spin, Goldman Sachs lost $2 billion worth of market value as its shares fell 3.4 in trading over the course of the day ("oh man, some guy says Goldman Sachs is evil? I HAD NO IDEA" -- the market). Thankfully, one hero stands ready to defend Goldman Sachs from public scorn: New York City Mayor Michael Bloomberg.

Bloomberg actually visited Goldman Sachs headquarters today to personally cheer up very sad bankers. Bloomberg met with Goldman head Blankfein and various other members of the 1 percent, in order to reassure them that they are good people who do good work, even though that is a ridiculous delusion that only fellow members of that class still believe.

"The mayor stopped by to make clear that the company is a vital part of the city’s economy, and the kind of unfair attacks that we’re seeing can eventually hurt all New Yorkers," Bloomberg's spokesman said. Bloomberg is a billionaire mogul who owns a financial information company, so Goldman Sachs and other major financial institutions are a vital part of his economy.

After his visit, Bloomberg continued his "stop piling on Goldman Sachs" tour on the radio:

"But even if it was said, it's a few people and, you know, Goldman Sachs is a firm that's been around for well over a hundred years and it's a great firm.”

“It's my job to stand up and support companies that are here in the city that bring us a tax base that employ our people and I'm going to do that."

He called news coverage of the letter "ridiculous" and "not something we should do."

We mustn't cover bad things about Goldman Sachs, because if we do they might get mad and leave us, and then we will have no more Goldman Sachs! They are so important to our tax base that New York City gave them hundreds of millions of dollars worth of tax concessions and grants and benefits after they unconvincingly threatened to move to the suburbs.

"Bloomberg View," the opinion arm of Mr. Bloomberg's media company that operates out of the offices of his charity, also defended Goldman in an unsigned editorial mocking Smith for failing to realize that Goldman exists to make money by any means necessary, which is obviously a self-evident Good Thing for The Economy and The Country. "If you want to dedicate your life to serving humanity, do not go to work for Goldman Sachs," the Editors write. Then: "Goldman and other investment banks do perform an important role in our economy, and Goldman bankers -- most of them, at least -- can hold their heads up high." I am sure they are relieved to hear they have Bloomberg View's vote of confidence. (Meanwhile, Bloomberg-owned Businessweek magazine offered this article documenting some recent "heads I win, tails you lose"-style Goldman malfeasance. When will these unfair attacks end?)

That's the essentially contradictory message currently being offered by defenders of Wall Street: Only a naive fool thinks Goldman doesn't rip off suckers, and also Goldman performs an important service. And as always the richest and most powerful people in finance turn out to be extraordinarily concerned about their public reputations, but basically unable to actually stop doing things that make people hate them.