In a Salon exclusive, De Niro recalls his early acting roots and the theories behind his great performances 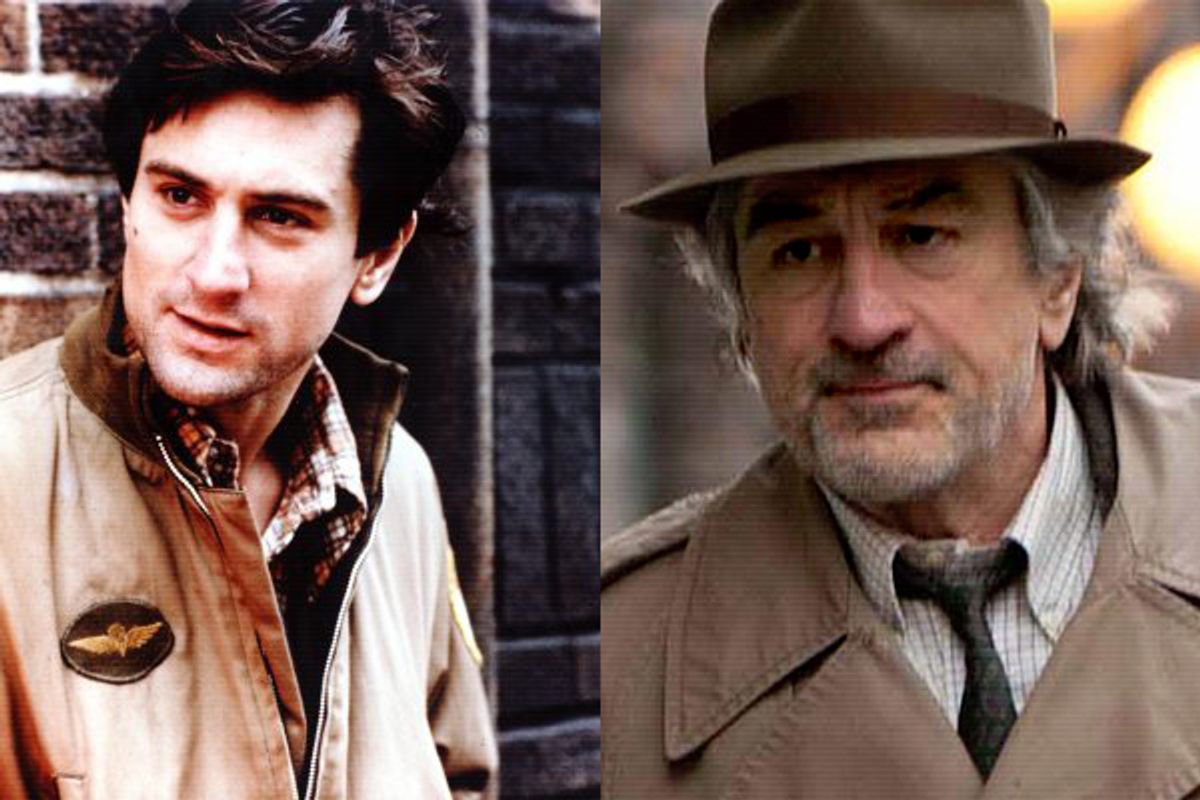 Since his first major film roles in “Mean Streets” (1973) and “The Godfather” (1974) Robert De Niro has built an enviable career and become one of the greatest actors of our time. Yet few actors have also had such an odd late-career arc; over the last two decades, De Niro’s career has been been marked by two-dimensional caricatures in films such as “Analyze This” and the “Fockers” comedies.

But as Jonathan Flynn, an alcoholic writer in Paul Weitz’s film “Being Flynn,” which continues opening in theaters today, he's won some critics back. The Boston Globe noted cheekily that this film offers the “now-rare sight of De Niro giving an actual performance.” The movie is based on a memoir by the writer Nick Flynn (played by Paul Dano), about his relationship with his father, Jonathan (De Niro), who abandoned his family and drifted through a life of homelessness and petty crime.

De Niro's performance style was informed by the two dominant mid-20th-century approaches to acting. By the mid-1950s, anyone who wanted to be somebody came through the Actors Studio, led by Lee Strasberg, who honed an approach to acting that critics were referring to as “Method acting.” Today, we think of a Method actor as one that inhabits his character to the degree that the actor literally puts himself in the shoes of his character – even when he is not on camera. However, there was another acting technique during the era being taught by Stella Adler, where Marlon Brando studied and with whom De Niro enrolled.

Adler taught that the actor does not embody the character so much as he becomes the character onstage (or film) through the actions of the play (or script). Like most actors of the time, De Niro ended up studying both at Stella’s school and the Studio. The schism between Strasberg and Adler created the greatest polemic of 20th century acting, as De Niro recalled when he sat down to discuss his earliest days as an actor and his latest film.

You began studying acting as a teenager?

I went to the Dramatic Workshop when I was 16 for about a year and then I went to study with Stella Adler when I was about 18 until about 21. I studied there full-time as much as anyone at that point. I took script analysis, sight reading.  I remember working on "The Girl on the Via Flaminia" ... and all the classics: scenes from Tennessee Williams, Clifford Odets, Chekhov.

Would you agree that Stella Adler’s genius was in script analysis?

I always gave her credit for script analysis and her approach towards acting. Just for the record, I wanted to do that. How she behaved, her affectation, that whole side of her ... I never cared for personally. But she made a lot of sense as a teacher.  She had a very healthy approach toward acting and technique, although she was a little at odds with the Studio and Strasberg and all that, but then she had a great actor, Brando, with her.

You mentioned the schism between Strasberg and Stella Adler.  She focused less on the actor’s personal past and more on his creative imagination.

With Stella, imagination was important, research too, but the imagination. I remember her saying, “You just don’t make it neurotic, unless the character is neurotic,” but it’s not about you. It’s about what you get objectively looking at photographs, picking things out, script analysis. You look at photographs and you don’t “fictionalize” as she would say, what’s in that photo, but take what is really in that photo and the same applies to a script, more to a play in the traditional sense, but to a movie script as well. I started getting involved at the Actor’s Studio when I was 24, 25, 26 years old. Some friends were going there and I did a play there, so I started going to the Studio after I left Stella’s. At the Studio, it was different ... everything was more in the moment.

When you say, “it’s not about you,” do you mean an actor has to get his ego out of the way?

There was a teacher who taught at Sarah Lawrence [College], and he said just go on instinct. And it kind of frees you because you get distracted with What’s my character? What’s my motivation? I felt there was something of value with that, especially with me. I thought about all these things before [I could even] move, whereas otherwise you can just go with it.

So you’re prone to overanalyzing a character?

Yes, especially as a young actor. You forget in life people don’t behave that way. They just do what they’re doing, there’s no thought behind it.

On “Inside the Actors Studio” you were asked to give young actors advice, and you said, “You have nothing to lose, so make it as personal as you can.” What did you mean by that?

What I meant was if you’re going for a reading and you got nothing to lose because so many things are stacked against you -- there’s a lot of competition out there -- so when you read, the only thing you have is your own uniqueness. So, you don’t need to be afraid to follow your instincts about what you think the character is doing. Just go with it, because if nothing else, the people watching you, the director, the casting people, whatever, will be impressed by what you’ve done and they’ll take notice. You have to try and be courageous. Don’t hold back ... Just go with it. And sometimes it’s easier because you know where to go with the character, and sometimes it’s harder. But in general, just follow your instincts -- even if you know you’re going to fail. If you don’t take that risk, you’re probably not going to make an impression.

That brings me to your latest role as Jonathan Flynn. How did you prepare for that character?

We had the writer, Nick Flynn, there all the time. I always feel it’s important to have the writer there as much as you can because they give you all their experience. He was so helpful with every detail that he knew about and used his instincts when he didn’t know for sure. I met the father. I went up to Boston. Nick had material his father had written on a novel, letters, and so on. Again, I followed my instincts, based on the writing, where they thought there was something I could add or take away or whatever.

How do you change up the failed alcoholic-writer cliché?

Well, he was an alcoholic . . . To me, it’s hard to be a writer and to have the discipline and the need to be in solitude with your own thoughts and express them on paper. I think the father was never able to resolve that. He did, but he couldn’t pull it together.  It takes a sort of discipline and a kind of professionalism whether you want to or not. I thought maybe the reason (he was) going to the alcohol is he wasn’t able to face the task of writing. He did it in spurts, sporadically; pieces of paper, there were things he had written. He did write most of a novel, but it never came together, as Nick says in the book.

With writing, great writing especially, you see how the material affects everything on a grander scale, so that this character ... represents an attitude of the world, or this part of humanity, if you will. Stella gave me that sense when you’re reading these characters they represent more than just themselves but they are themselves in a very real way. That made an impression on me; she taught how acting applies to a bigger vision.

Sheana Ochoa’s is the author of the forthcoming "Stella! When There Were Giants," a biography of Stella Adler