As the GOP gets desperate to blame higher gas prices on Obama, their role as the Gas and Oil Party becomes clearer 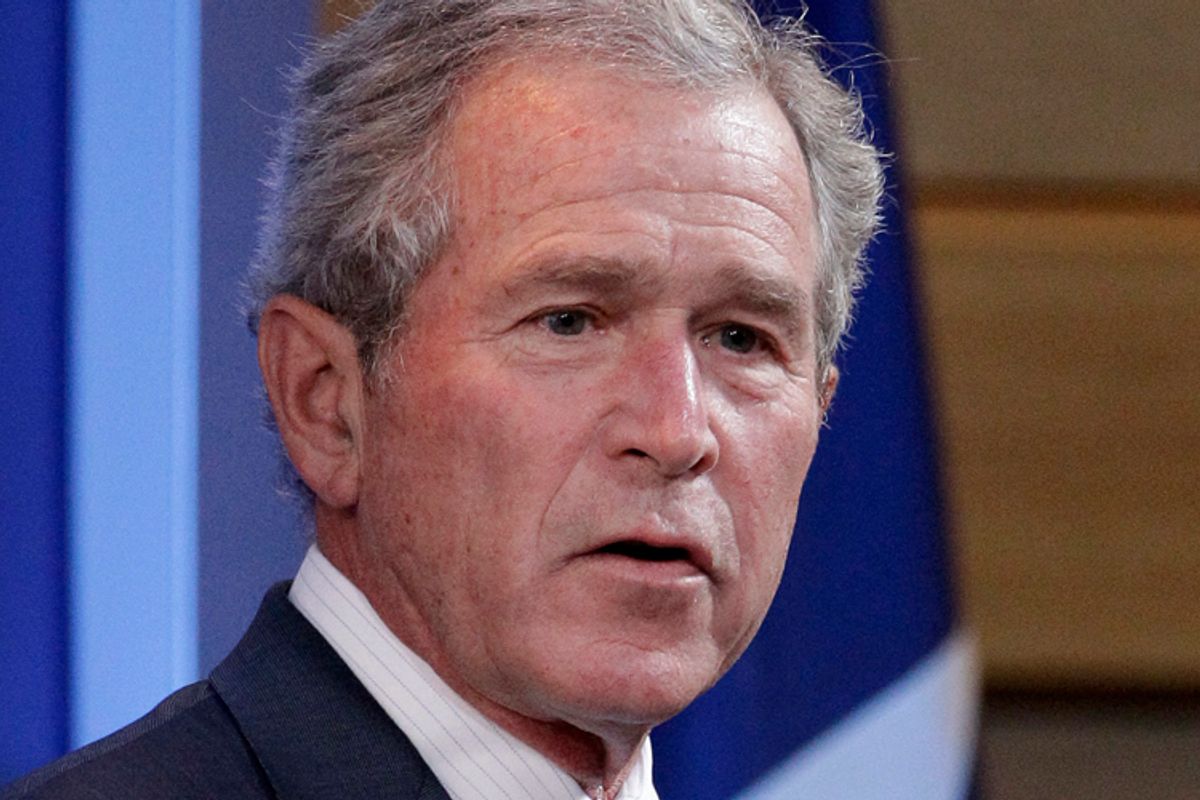 Unemployment is down, consumer confidence is up, the GOP is waging a crazy, unpopular jihad against contraception, and its presidential candidates get less popular as the primary season continues. So blaming President Obama for rising gas prices has become the party's new strategy.

The problem is, there's nothing any president can do to make gas prices go down, and Mitt Romney, at least, admitted as much on Fox today. That won't stop him and his rivals from dishonestly insisting the president is to blame. They continue to insist that the president's refusal to drill for oil on every square inch of land or sea that may harbor it, and to green light the environmentally disastrous and economically questionable Keystone XL pipeline, is to blame for the pain at the pump.

Former President George W. Bush even made a rare jump back into American politics this week, telling the American Fuel & Petrochemical Manufacturers conference that building the Keystone XL pipeline is a "no brainer." He should know.

OK, that's mean. Bush has a brain, he just doesn't use it very often – and when he does, it's on behalf of his wealthy oil and gas cronies. The rhetoric around Keystone, and the president's political problems with rising gasoline prices, is getting sillier by the hour. Bush says Keystone will create jobs, while conservative scold Charles Krauthammer says it will bring down gas prices, when in fact it will do neither.

One of the best kept secrets in American politics seems to be the fact that the oil the pipeline will carry from Alberta, Canada, to Port Arthur, Texas, is intended for sale in Asia, mostly China. TransCanada Corp. wants to take advantage of a foreign-trade zone in the Texas Gulf Coast area that will allow tax-free transactions. “That foreign-trade zone is what made me suspicious of what the real agenda was for this oil,” Rep. Ed Markey told Newsweek's Eleanor Clift. When Markey tried to require that oil carried through the U.S. by TransCanada be sold within the U.S., Republicans blocked him, arguing that the market for oil is global.

And they're right – which is why neither Keystone nor any of the GOP's other "drill, baby, drill" solutions will have much impact on rising gas prices.

But Bush's endorsement of Keystone should remind voters what the Republican gas-price crusade is really about: The GOP is the Gas and Oil Party, and the party's leaders will use any excuse to push the industry's agenda.

The GOP is facing a slew of inconvenient truths as it blames rising gas prices on the president. First, domestic production of oil and gas has never been higher. It's jumped 50 percent since 2006. Yet prices in that period have continued to rise. Then there's the fact that even if we opened up all the areas that are closed to drilling, we wouldn't see the results until 2030.

It's not even clear that rising gas prices are to blame for the president's recent rocky ride in opinion polls. Gas prices have been climbing since December, and Obama's approval numbers have mostly been rising since then. They apparently dipped last week in some polls, but now they're up again. Whatever is going on, it's simplistic – and wishful thinking for the GOP -- to say it's all about high gas prices.

It's true that various polls say voters blame the president for higher gas prices, and that they'd like him to approve the Keystone XL pipeline despite its irrelevance to domestic gas supplies. For the most part, the president's strategy has been to talk honestly with voters about what's behind rising prices, and about how little he can do about it. Obama tends to give voters credit for more intelligence than pundits do; he gave a complicated speech about race, you might remember, when even his advisers said it was a mistake. He's trusting that voters will get the issue's complexity.

On the other hand, on Friday the White House announced the president is going to the site where domestic construction of the segment of Keystone that's been approved will begin – to transport oil drilled in Oklahoma to be refined in Texas. That portion of the pipeline has its own environmental risks, and again, there's no guarantee oil drilled or refined in the U.S. will benefit American consumers. "Solomon proposed splitting the baby – Obama always actually tries to do it," Keystone opponent Bill McKibben tweeted on Friday afternoon. It remains possible that Obama will give up on his talk-sense strategy on energy and cave to Keystone XL's backers.

But it's clear that Keystone's backers control the GOP. As good as they have it under Obama, with record profits and record production levels, they were happier under Bush, who came from their industry. They'll do whatever they can to get Obama out of the White House – whatever he does about Keystone. Let's hope the president remembers that as his enemies beat the Keystone drum.