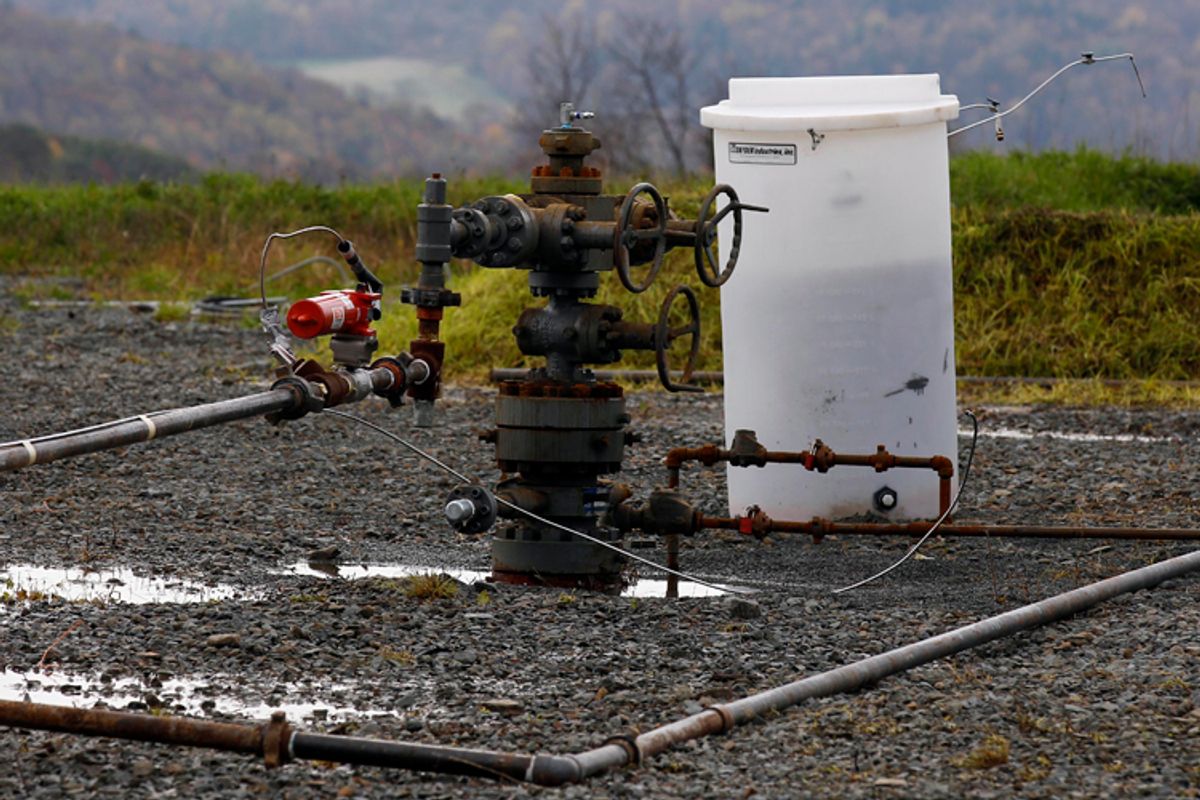 Of all the political tactics used to protect business interests, none is as powerful as the layer ploy -- the one in which an ugly corporate giveaway is hidden one layer beneath something popular. It's the oldest trick in the book: Offer up Mom and apple pie, and few are likely to notice the noxious serving plate.

Whether it's a lobbyist-written trade deal lurking beneath a bill extending unemployment benefits or a corporate subsidy undergirding a must-pass defense spending bill, this is the way some of the most corrupt policy has become law in recent years. It's also the way oil and gas business allies are now advancing that industry's interests in the face of proof that drilling may be endangering Americans' health.

The situation is harrowing. In just the last year, the Environmental Protection Agency and Duke University have both uncovered evidence linking groundwater contamination to the controversial drilling practice known as hydrofracking. The incriminating findings are so clear that according to Pittsburgh's CBS affiliate, fossil fuel firms in Pennsylvania acknowledge that the "natural gas exploration industry is partly responsible for rising levels of contaminants found in area drinking water."

In response, many communities are trying to slow the drilling boom. That has created a serious problem for oil and gas companies, who want to drill as much and as quickly as possible. So their political allies are working to tie drilling to Mom-and-apple-pie initiatives as a means of crushing any opposition.

In Republican-controlled Ohio, where Columbia University scientists say drilling caused recent earthquakes, that means trying to lash oil and gas revenues to the GOP's popular income tax cut orthodoxy. Indeed, this is the obvious objective of Ohio Gov. John Kasich's recent proposal to institute a hydrofracking tax whose "fresh revenue (will) give a personal income tax cut to Ohioans," according to the Cleveland Plain-Dealer.

To understand Kasich's true motive is to appreciate that he is no tax-and-spend liberal or fossil-fuel hater. He's the opposite: an anti-tax crusader who has taken $213,000 in campaign donations from the oil and gas industry, and who has tried to open up state parks to drilling. That record suggests his new tax moves are really designed to help drillers overcome any grass-roots opposition -- in this case, by tying drilling's expansion to alluring tax-cut policies. In the vernacular of political sloganeering, Kasich is basically saying, "Drilling for Tax Cuts."

In Colorado, where 343 oil and gas spills occurred in 2011, the oil and gas industry's mantra is a bit different: It's "Drilling for Kids," according to Democratic state Sen. Morgan Carroll. She has criticized the state land board for giving ConocoPhillips the drilling rights to a 26,000-acre parcel adjacent to Aurora, Colorado's third-largest city. The massive swath of land is not just any old property; it's an old Air Force base that's home to a Superfund site and a major reservoir, and also filled with unexploded munitions and depleted uranium.

The idea of drilling on such a fragile and dangerous site seems ludicrous -- but the governor-appointed land board has been able to push the deal forward and stymie tougher regulations by insisting that oil and gas exploration will help schoolchildren.

"They've been telling Democrats in the legislature that it's really for the kids," Carroll says. "They are able to make that argument because some of the money from the sale is earmarked for K-12 education."

As the industry's "drill, baby, drill!" mantra butts up against more science-based opposition, be on the lookout for this same layer ploy in every state. It's at once enticing and deceptive -- but when that platter of Mom and apple pie is inevitably served up, try to remember what the dish is made of.