Amid bloodshed and instability, Syrians talk about the state of their nation and their hopes for the future 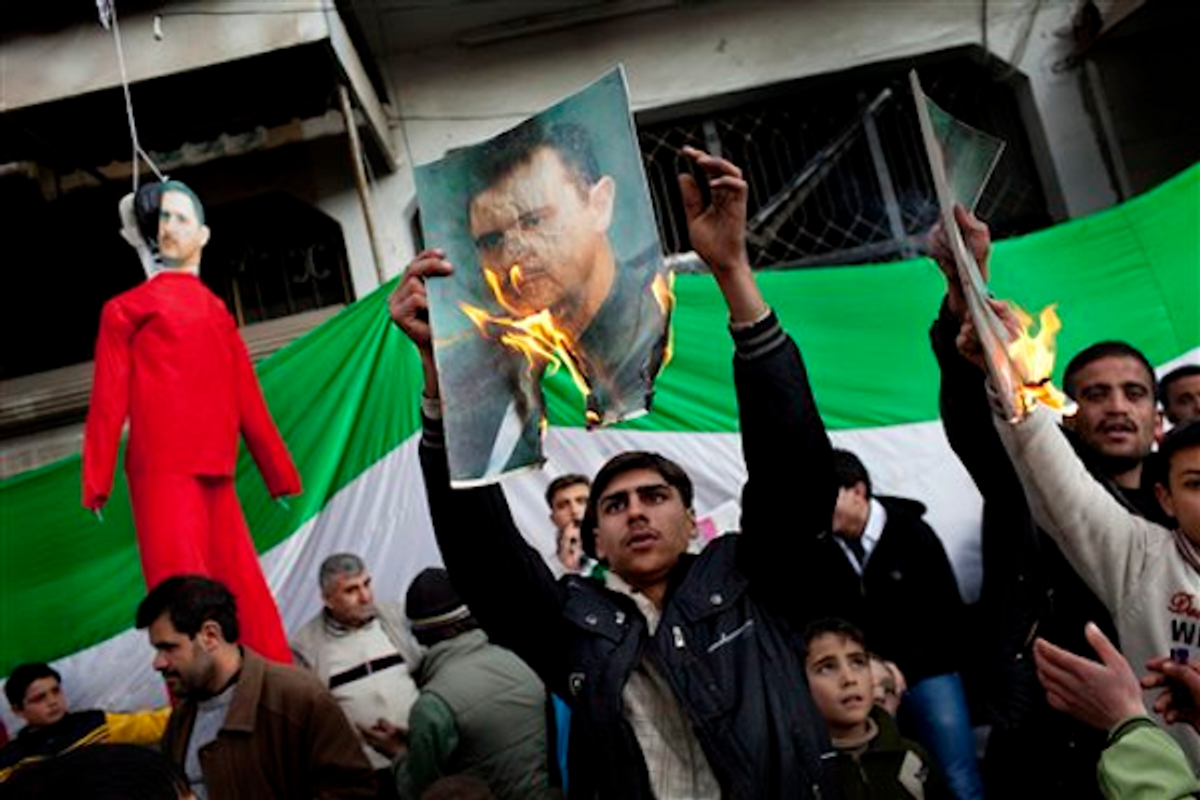 The Syrian revolt is now one year old.

Activists say more than 8,500 people have died while the Syrian regime continues to blame foreign-backed terrorists and gangs for the unrest. In the major population centers of the country, including Damascus and Aleppo, however, life remains largely calm.

GlobalPost spoke to Syrians from various parts of the country and from differing religious backgrounds to ask their views of where their country is today, and where they think Syria is headed.

Most agree life is worse now than before March 2011.

Malda, a former journalist-in-training from Dummar, a suburb of western Damascus, said life for her had deteriorated.

"There is no gas, no electricity, it's not safe to go out, and I am talking about Damascus, we can't forget the killing that is happening everyday elsewhere. But the only thing that gives us some comfort is that every loss of life is for our cause for freedom," she said.

Osama, a 25-year-old law student from Aleppo, said the uprising has upended the social interactions in the country.

"In terms of work and markets, it was better in the past," he said. "Socially speaking, [the uprising] helped a lot of people discover the true colors of those around them. A lot of new friendships emerged, while others faded away because of political, but more importantly, human, points of view.”

For some, it’s all about the economy, which has suffered under the weight of international sanctions. The Syrian Pound has lost half its value since the uprising began.

“I'm under-employed, having lost one of my jobs, my family is near bankruptcy due to the economic sanctions and travel restrictions, and I've become a regional pariah as far as employment goes," said Hadi, a teacher at a language institute until it closed late last year.

Support for the regime since the unrest began has polarized its citizens and not always along sectarian lines. Some have framed the Syrian uprising as a Sunni majority fighting against an Alawite minority — an offshoot of Shiite Islam that dominates the country's leadership.

Shadi, a 29-year-old Alawite from a village on the Syrian coast, however, does not support the government. He said the authorities had dealt poorly with the revolt and tired of its "hollow reforms."

Meanwhile, Rama Tarabishi, 25, a Sunni Muslim who works for a cement manufacturing company located outside Damascus, said she wholeheartedly backs the regime. Tarabishi asked that her real name be used (all others interviewed for this article asked for anonymity).

"I support Bashar al-Assad even more now. The reason is simple: It is because I was lucky enough to not get brain-washed by the fake fabricated media," she said, referring to international coverage of the revolt. "It is because I fully understand the conspiracy to destabilize Syria."

As for a possible solution to the conflict, foreign intervention is not popular among many sections of Syria’s population.

Shadi said negotiations "under the roof of the United Nations between the regime and the opposition" should take place "to transfer the authority to an elected transitional government."

Osama says: "Any solution by foreign intervention won't be a long lasting one. Many ordinary Syrians are even not able to access their accounts in Western banks. As long as the West punishes the Syrian people they will cling more to the regime and to its conspiracy theories."

Most interviewed by GlobalPost are hopeful for the future, though for contrasting reasons.

"Even though I think that this turmoil might last for a few years and make Syria another Philippines, I think that the majority of the Syrian people are creative and tolerant enough to rise from ashes and build again," Osama said.

"Syria is strong," according to Rama. "I have always believed in Bashar al-Assad and I am one of a million who love him. He is the most popular leader and greatly loved by his people, we won't let him fall."

Shadi thinks the political opposition's efforts have been unhelpful. "The opposition is an essential element in the crisis, they are scattered without any coordination or united orientation."

Rama, who supports the Syrian authorities, respects the opposition that she said wants the best for Syria, but said: "Unfortunately what we have now are armed groups that attack the Syrian army, our main and sole defender; this opposition calls for foreign occupation."

Hadi was also critical of the opposition.

"They refuse to be put under any burden of expectation, refuse to say how things will be different under their rule, refuse to make even the most basic of guarantees, and full-out mark you as a traitor when you confront them with these facts," he said.

On the issue of arming the opposition, Syrians are divided.

Shadi, an employee at a western embassy until it closed, opposes the regime but also warns against arming the opposition. "It will lead to more loss of lives, civil war and gives the regime the right to use its military forces and to shell cities."

Malda said it would be the right move. But Osama said never. “I think that this is what the regime wants. By arming the opposition the regime will have a pretext to use its killing machines against the people."

"Arming them further simply means that the numbers of those in the crossfire will grow rather than any guarantee of security. That said, considering that no other solutions are forthcoming ... I don't know, it's an impossible situation," Hadi said.

"The only armed sector in country is the army who defends the country's borders," Rama said. "Arming the opposition is simply feeding the fire of civil war in Syria."

The outward mood in Damascus, meanwhile, is defiant.

In a display of strength, pro-regime rallies were held Thursday in six provinces, including in Damascus’ city center where military helicopters flew Syrian flags overhead. The rallies were organized to express, "Syria's rejection of the foreign conspiracy," according to Syrian state media.