Glimpse the breathtaking range of Japanese "deco era" art -- highbrow, lowbrow and everything in between 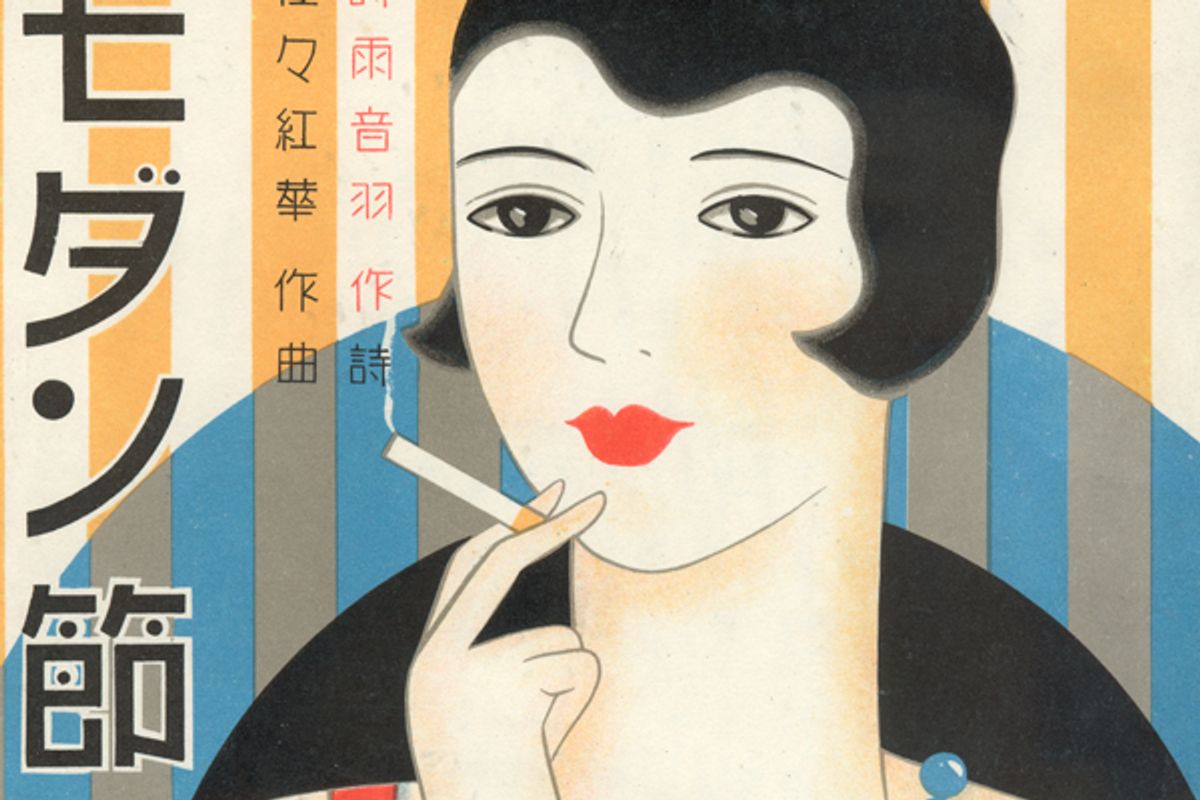 The "modern girls" ("moga") who populate some of the works in the Japan Society's new exhibition, "Deco Japan," inhabit a world of contradiction: frivolity and militarism, bright colors and dark geometry, Western impulse and Japanese tradition.

Some of the most striking images from the exhibition come across like 20th-century updates to the Edo-period prints of Hokusai and Hiroshige. Other items from the show -- which encompasses everything from smoking sets and kimonos to matchbox covers and fountain pens -- paint a picture of "cultured" Japanese home life from the inside out. Indeed, what the entire collection communicates most clearly might be the very vastness of the "deco era" landscape -- and the difficulties of generalizing about the nature of contemporary artistic endeavors.

Over the phone, curator Kendall Brown spoke to me about the themes and influences most evident in the works on show (and the complicated meaning of "art deco"). Click through the following slide show for a tantalizing peek at flapper-era Japan.

Am I right in thinking that most or all of this material hasn't been shown in the U.S. before?

Yes. There was a big world art deco show organized by the Victoria & Albert Museum [in 2003], and I think a couple of the pieces were shown in that. But of the 190 [pieces in our exhibition], I'd say all but a handful are being shown for the first time in North America. (And in most cases, for the first time anywhere in the world, maybe since the 1930s.)

For the purposes of this show, what does "art deco" mean and not mean?

As you know -- or I think your question indicates -- "art deco" is a retrospectively art historical term. It was created in the 1960s to refer to a broad movement in the 1920s and '30s. We're talking about art deco first as a style, ... both an outgrowth of and a reaction to art nouveau -- geometric, clipped, short, rectilinear use of lines; streamlined shape; modernist, but with ornament ... And we're also talking about it in terms of things with color, a bright palette: Nile green, chromium yellow -- a love of natural, organic form treated in abstract ways. That's one thing that "deco" means.

Another thing that "deco" [represents] is an era. Sometimes we refer in the exhibition and catalog to the "deco era," by which we really mean '20s and '30s Japan. There are some things in the show that might be considered constructivist; [with those,] we're showing the impact on deco -- deco and, let's say, the shoulder of deco. ...

In terms of what "art deco" doesn't mean, we're really looking at deco objects; we don't look at architecture. We don't have architectural elements [in the show]. If you were writing a book on Japanese deco, you could certainly expand to talk about architecture.

Would you say many of these pieces reflect a Western influence?

Indeed, they do. One of the things that's appealing for what we're calling Japanese deco style in the '20s and '30s is that it simultaneously fulfills two different functions. One is that it shows [Japanese artists] being up to date and international -- European-American -- so it's very cosmopolitan ... But [when the deco and art nouveau styles] are being developed in Europe, in Paris, there's already a sort of Japan-esque element. The Japonisme is part of so much of European (especially French) modern art, from the impressionists to art nouveau to art deco. So for the Japanese, even as deco is a European, cosmopolitan, up-to-date, forward-looking style, it's also a style that connects with, and in a sense utilizes, the Japanese past.

It's familiar and unfamiliar, forward-looking and backward-looking simultaneously for the Japanese. But certainly there's a strong European element. And in fact, the very first part of the exhibition, and the first part of the catalog, look at the cultural appropriation -- how Japanese deco adapts Euro-American urban culture and adapts Egyptomania, the so-called "Nile Style."

Can you talk about the theme of the "moga," or the "modern girl," in these pieces?

Thematically, the aspect of Japanese deco of the '20s and '30s that epitomizes this cosmopolitan urban culture is the subject of the "modern girl," who is in some ways sort of the "flapper." This kind of middle- to upper-middle-class urban woman wears Western clothes -- and even if she wears a kimono, she might have a Western hairstyle and accessories. She goes window-shopping. She goes to cafes. She smokes. She drinks. She ostentatiously does her makeup, in a pocket mirror. The modern girl is perhaps the crucible of the deco culture.

Where would these works have appeared? Were they meant for the home?

The exhibition looks at art from four worlds or realms. [First, we have works] made for national exhibition. The Japanese had the equivalent of the French Salon -- an annual, government-sponsored art exhibition -- and there are a number of pieces made for that. We can call that "high art" or "museum art."

There's also the opposite, which is the art of the streets: commercial art, mass culture, posters, matchbook labels. So we have the high and the low, the fine art and the commercial art.

In between those [lies a middle category]. If we have highbrow and lowbrow, then there's also "middlebrow," which is art for the body, personal adornment: kimonos, haoris (the jackets you wear over kimonos in cold weather), obis [kimono sashes], and hair pins. This is art made to decorate the body.

The fourth area this art was made for is the home: the modern bourgeois home, which Japanese at this time, in the '20s and '30s, called a "culture home" (which is to say at least a partially Western-style home). You might have a piano; you would sit on chairs and a couch. You'd have an end-table with tchotchkes on it. You'd have a mantle with a clock, and Western-style books would be standing up there on their bookshelf ...

We're looking at art for these four distinct realms. But what's interesting about the deco style is that it crosses between them. It's highbrow; it's middlebrow; it's lowbrow.

I was a little surprised at the overt eroticism of some works from the show [e.g. slides 3 and 4]. Was this unusual or remarkable for the time?

But at the other end -- also appropriate for deco, and showing the style -- is this growing ultra-nationalism and even militarism. This real tension of '30s culture comes through in deco, and this exhibition, we hope.

When and why did the Japanese "deco era" end?

The very last [part] of my essay in the catalog says that really, the last gasp of deco would be [sometime in the] early '50s. A few artists who never got around to it in the '30s come to it after the war, and a few artists who did it in the '30s and early '40s do it a little bit after the war. But for the most part, this collection really stops [around the end of World War II]. I think our last dated piece is from 1943.

Deco isn't just frivolity and lightness -- it also has this heavy potential for [the] militaristic. But by the end of the war, not much of anything is made, and even the deco-ish nationalistic pieces are seen as a little suspect. I don't have a perfect answer to your question, but for the most part, the deco era is really the '20s to the early '40s.

"Deco Japan: Shaping Art and Culture, 1920–1945" is on display at the Japan Society in New York city through June 10. All works on display are from the collection of Robert and Mary Levenson.