The unexpected lessons of Mexican food 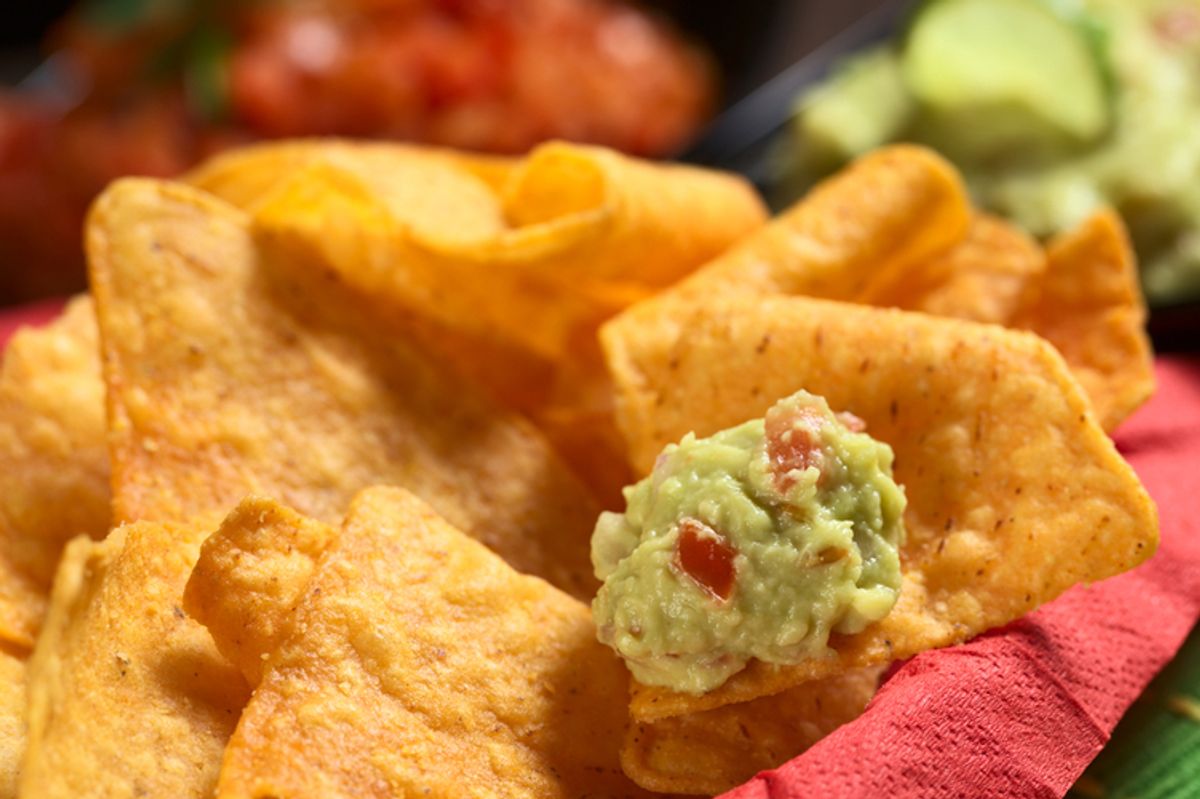 I first discovered cooking at age 5, when the earthy smell of boiling pinto beans lured me into the kitchen. It was my dad. He dripped them into an oily skillet and smashed them into a lumpy paste. I started pulling on his apron straps, begging to know the name of the concoction.

“Your grandmother always made this,” he said, stirring the bubbling brown stew and pinching in cumin. “I’ll teach you how to make it. Here, try it.” He raised the dripping spoon to my mouth. The mild tingle of cumin and the soft squish of beans lingered on my pallet, like a spicy fingerprint.

For as long as I can remember, I’ve felt the push and pull of growing up biracial in America. In the Mexican side of my family I was known as the white one. Even though I spoke Spanish, it was the formal kind learned from classrooms and reading, rather than the one you pick up by bartering with local shop owners over the price of firm avocados, or arguing with parents over a ridiculous curfew. On the other side, my cousins called me a “Wexican,” a white Mexican despite my similarly toned skin.

Cooking, however, taught me to channel my frustrations by creating foods through the addition of sour cream, cilantro, cayenne pepper and tender meat. I could make a food that doesn’t have to be Mexican or American.

Since I was 6, my cultural anthropologist father took me on his research projects along the border in South Texas. He wanted to show me the tiny corner in his hometown that birthed the iconic Latino food: the nacho.

We ended our 14-hour drive from Colorado as the sun began to set behind the sandy wasteland known as West Texas. We pulled into the Best Western for refuge, the only hotel for almost a hundred miles. The Anglo man gawked at my dark-skinned father and his freckled child, and answered our unasked question: “We’re out of rooms.” He shuffled his papers to avoid eye contact. As my father dragged me closer to the counter, he strengthened his grip on my tiny hand and asked why the parking lot was empty if they were out of rooms.

“Conference,” the man said, glaring at my father and me without blinking.

We spent the night on a ratty mattress supported by cinder blocks at another motel a few miles away. When dawn came, we started our trip again as if nothing happened.

“I hate white people,” I muttered as we approached the sign welcoming us to my dad’s hometown, Eagle Pass. He jerked the car off the road and pounded the brake. He sighed, wiped the sweat from his forehead and glasses, and demanded that I never utter those words again. “How would your mother feel if she heard you say that?” he said.

We arrived at our destination, Eagle Pass, Texas. We weaved through the bustling streets of downtown, lined with banks, money exchanges and a line outside of the local meat market and bakery that snaked past a convenience store where people bought icy Cokes while they waited. From here, we saw the concrete bridge connecting Mexico and the United States over the Rio Grande River. During the '60s, my dad crafted lures on both sides when he fished for catfish, carp, turtles and alligator. Now, the heat sensors and armed guards stop him from crossing as freely. We parked in front of an old hotel and began to wander around town.

Inside the Mancha Meat Market and Bakery, a sharp, sweet smell of caramelized sugar filled the room, emerging from the side ovens cooking sweet bread glazed in a strawberry coat. On Saturdays, however, the stench of bloody, uncooked cow head lurks toward the empanadas and sweet bread.

Barbacoa, slow-cooked beef, had served as the Mancha family's specialty for 70 years. Every week they divide up several beef heads, place its remains in thigh-high containers, lower it into a hot pit, lined with mesquite coals, behind the bakery, and wake up at 6 a.m. the next morning to find the juicy aroma of tender meat, inviting you for a breakfast treat. On Sunday they used to sell well over a hundred pounds of meat for $3 a pound. Hordes of Mexican and Anglo mothers wait patiently to get their bounty for dinner that evening. There were only two weekends when Eagle Pass was left without barbacoa: once when elder Mancha died in the early '90s from heart disease, and the other when his wife joined him several years later.

Being one of the first Hispanics to get a Ph.D. in his program at the University of Pennsylvania weighed down my father whenever he returned to Texas. He liked to keep his accomplishments tucked away from most people. When he stopped by his friends’ bakeries, banks and law offices in Eagle Pass they always greeted him with endearing shouts and playful insults. But underneath the handful of dinner invites and barbecues, he felt a gradual separation with his past.

Sometimes, I think my dad tries to repair his link back to Texas through his students, especially the minority ones. He directed the ethnic studies and chaired the anthropology departments, and in his spare time takes on a mentor role for the first generation and students of color. At lunch he sketches their life plans on ketchup-stained napkins and tells them not to take any crap from losers. Most of those students go to grad school or work as a professional in a high-powered “something.” Not once during these meetings did I ever hear him tell students how to go back to their old lives, Santa Fe, Detroit or Los Angeles, after college. Likely, he was trying to figure it out for himself.

We trekked along the international bridge against a stationary line of cars waiting to enter the United States. Our two-hour wait in customs seemed like nothing compared to their four-hour wait in the unforgiving Texas heat. The sound of nearby dogs barking and angry shouting in Spanish caused me to jump, but before I could turn around, my dad tugged at my shirt, a signal for me to keep going.

The dim glow from the Moderno’s antique lamps and wooden tables made it feel like a speakeasy, rather than a restaurant. During the 1950s it served Mexican as the hangout for Mexican and Texas politicians, including President Lyndon Johnson and Maverick County Judge Roberto Bibb, conniving the different ways the Mexican vote would be delivered. As in those days, people still spent their dollars on beer, milanesa and, according to folk legend, the famous nachos, invented in this restaurant.

The waiter brought our mountain of freshly hot tortilla chips, each with some refried pinto beans, topped with a small slice of cheddar cheese and crowned with a deep green slice of jalapeno. We scarfed down the nachos like a horde of hungry javelinas. For the next 10 minutes we communicated in grunts and moans, only aware of the explosion of flavor in our mouths and the flow of dense cheese bubbling in our stomach.

The nacho, according to my father’s stories, represents the fusion between the Spanish colonizers’ new-world dairy and the Aztecs’ corn and chile. Throughout the centuries, the recipe morphed, first with the independence of Texas and California from Mexico, and then the immigration boom in the 20thcentury. By the 1980s, even though Cortez and Montezuma had withered into the pages of history, their spirits live on in the hot plates of these fried delicacies.

In my junior year of college, I decided go on my own adventure south of the border. But this time, I flew past Piedras Negras and landed in Buenos Aires, where the Mexican restaurants left my mouth bitter and my wallet dry. The Argentine diet consists of rich cheese, juicy steak and fluffy bread, carried over by the millions of Western European immigrants at the beginning of the 20thcentury. The country’s distance and lack of immigrants from Mexico left Argentines confused over the simplest of Mexican dishes. The huevos rancheros scraped against my mouth, and the weak margarita left me thirsty. I missed spicy food so much, that my biweekly trip to the Bolivian vendor for jalapeños resembled a drug deal more than a produce purchase. Something needed to change.

So I started cooking. I spent the day before my feast assembling the ingredients from all over town. The Bolivian woman from down the street sold me the jalapeños, a 10-minute subway ride took me to the dietary shop where I bought dried black beans, and a long bus ride brought me to the only Mexican restaurant that hustled individual tortillas for a dollar apiece.

I made Guillermo cook the black beans, while I diced the tomatoes into fine cubes. Even though he claimed vegetarianism, he rarely ate beans and pulverized them in the skillet with childlike curiosity and enthusiasm. He never knew Mexican food beyond the posh restaurants in the gentrified neighborhood of the city, and saw this as an authentic way to learn about Mexican culture from a real live Mexican.

“I’m technically American, Guillermo,” I told him as I started slicing the avocados. “My dad is first generation and my mom is white. I’m considered Hispanic.”

“Well, you’re the only Mexican I know,” he said. “If you speak Spanish, cook Mexican food, and have Montaño as a last name, I don’t see how you could be anything else.”

The waterfall of beaten eggs I poured into the sizzling skillet engulfed the fried tortilla cubes, until the batter thickened.

“It’s a Mexican peasant dish,” I said sprinkling in the peppers. “When the ingredients in your house were just about to go bad, you threw them all in a pan and ate it.”

Guillermo and his friends took hearty spoonfuls from the skillet, and before I could stab a piece of egg for myself, they wanted more. I slathered the beans Guillermo flattened into a rough paste over a fried tortilla chip, topped it off with a thick piece of cheddar and a single jalapeño slice, and offered it to Guillermo. He ate it all in one greedy bite. After a few seconds of hurried chewing, he stopped, opened his mouth and screamed,

“IT’S TOO HOT! IT FEELS LIKE HELL ON MY TONGUE!” he said right before he gulped down two glasses of strong margaritas. Several hours later, and a bottle of tequila later, he passed out on his bed finally knowing what “real” Mexican food tasted like.

For the next couple of months in Argentina, I cooked regularly for my Argentine friends and told stories about cooking with my dad. The entire time, they noticed how my syntax and vocabulary differed from theirs. Even though I spoke Spanish as a second language, they always referred to me as their “Mexican friend.”

My dad and I eat at Chipotle when we don’t feel like cooking or want to get out of the house. I order a veggie burrito stuffed with grilled peppers, wet black beans, sticky white rice and cheese. My dad usually orders the same, but tortilla-less, because of his doctor-mandated hypoglycemic diet. Even though he likes to call Chipotle “the Mexican PF Chang,” he likes the taste and befriended everyone who works there. We know the Mexican women behind the counter and we always tell stories about Piedras Negras, while they lament Mexico City and brag about their children winning college scholarships.

Armando Montano is a senior Spanish and Latin American Studies major at Grinnell College. He's an aspiring journalist with a passion for cheeseburgers and travel.