From a sex strike to satirical anti-Viagra bills, the war on reproductive rights has some responding with laughs 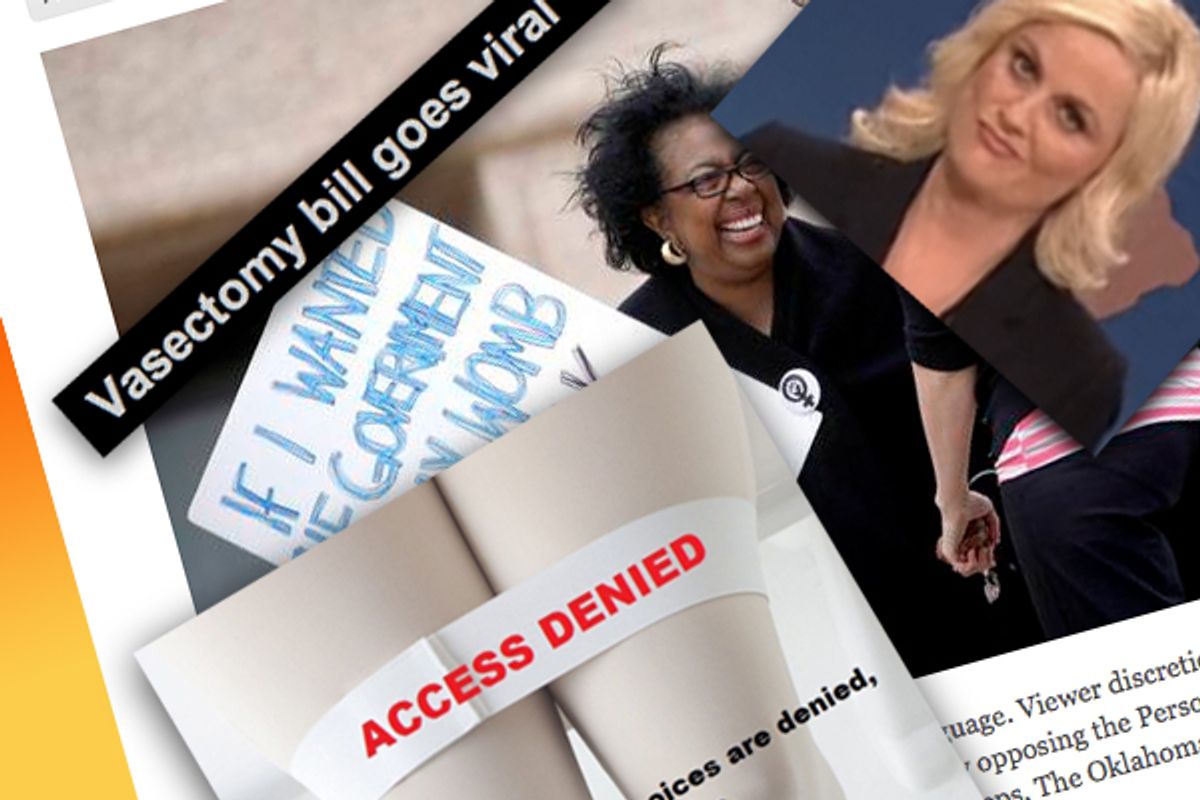 From a proposed sex strike to mock legislation restricting access to Viagra, women are coming up with increasingly creative ways to respond to attacks on reproductive rights. Many of them are relying on something ladies are often said to be without: a sense of humor.

In case you didn't catch on, the sex strike is tongue-in-cheek. Annette Maxberry-Carrara, founder of Liberal Ladies Who Lunch -- the group that proposed the "Access Denied" protest -- tells me with a laugh, “We're not looking at it as a literal strike." But they are making a serious political statement. The event's tagline reads, "If our reproductive choices are denied, so are yours."

You would have to be profoundly tone deaf to not recognize the satire in recent bills proposed by female lawmakers that proclaim "every sperm is sacred" and restrict access to the blue pill. Last month, Oklahoma state Sen. Constance Johnson offered a bill in response to Senate Bill 1433 -- which seriously and nonsatirically holds that a fetus at “every stage of development” has “all the rights, privileges and immunities available to other persons, citizens and residents of this state.” Her proposal states, “[A]ny action in which a man ejaculates or otherwise deposits semen anywhere but in a woman’s vagina shall be interpreted and construed as an action against an unborn child.”

A handful of similar bills call for men to jump through hoops to obtain Viagra -- a mandated cardiac stress test, a rectal exam, even being forced to watch a “horrific” video on the drug's side effects. Some have managed to make a big statement without a bill: During a protest of Oklahoma's Personhood measure, state Sen. Judy Eason McIntyre stood in front of the state Capitol with a grin on her face and holding a sign reading, “If I wanted the government in my womb I’d fuck a senator.”

It isn’t just these daring female lawmakers who are turning to humor to combat the anti-choice onslaught. Consider the scores of everyday women who have hijacked the Facebook page of Virginia state Sen. Ryan McDougle -- a supporter of the state’s transvaginal ultra-sound mandate -- with exquisitely detailed descriptions of their vaginas. For example: “Hey senator! just a quick hello to let you know that I'm currently ovulating! my vaginal discharge is thick and sticky and smells acidic (probably all the garlic i've been eating!).” In February, my Facebook news feed was filled up with repostings of a screenshot from “Morning Joe” showing an all-male panel criticizing an all-male Congressional panel on birth control. (The show certainly didn’t intend it as satire, but it read like a piece from the Onion, and women circulated it as such.) That's not to mention recent biting commentary on the topic from comedians like Amy Poehler.

This isn't entirely new, of course. Women have long used satire to make political points. Just look at suffragette Alice Duer Miller’s bulletpoint list of reasons why men should not be given the right to vote (a highlight: "Because men are too emotional to vote. Their conduct at baseball games and political conventions shows this, while their innate tendency to appeal to force renders them unfit for government”).

“There were a lot of women humorists in the 19th century who were going at the political system in a very similar way, and it had a very big effect on women getting the vote and being able to be admitted to colleges,” says humorist and feminist theory professor Gina Barreca. “Every generation of women sadly thinks they're the first ones ever to do this because the tradition isn't usually encoded.”

That said, it’s reached a fever pitch as of late. The recent comedy-infused pushback against the assault on reproductive rights builds on what Amber Day, author of "Satire and Dissent: Interventions in Contemporary Political Debate," calls a “satirical renaissance” of the last decade. It’s a result, in part of the fact that “political debate has become so heavily stage managed that there is rarely any discussion of substance happening,” she says, and talking points are “repeated ad infinitum on the debate programs, with scarcely anyone bothering to fact check or to push through to the real substance of the matter.” Contemporary satire -- from “The Daily Show” to "Saturday Night Live’s" Weekend Update -- offer “us a way to satisfyingly break through the existing script.”

Women are turning to satire now “for many of the same reasons others have in the past,” Day says -- it’s just that the current war on reproductive rights is more motivating for vagina-havers. “What much of the recent satire has demonstrated is that there is still a lot of sanctimonious language that gets used in discussions of women's health and sexuality,” she says. “That language is revealed as ridiculous when applied to men's sexuality.”

That was the aim of Missouri state Rep. Stacey Newman, a Democrat, who proposed a measure earlier this month that read in part, “A vasectomy shall only be performed to avert the death of the man or avert serious risk of substantial and irreversible physical impairment of a major bodily function of the man.” She tells me that attempts to restrict women’s reproductive rights are constant. “We deal with this all the time,” she says. “You feel like all you can do is sit there and bury your head and go, ‘Is anybody paying attention?’”

Maxberry-Carrara, of the faux sex strikers, was similarly aiming to get people’s attention, and her tongue-in-cheek protest did the trick -- and the strike hasn't even officially started yet. "What we wanted was to bring attention to the assault on women's rights,” she says. Her hope is that by poking fun at these legislators, "the less seriously we can take them as candidates.”

Barreca, author of "It's Not That I'm Bitter ... : Or How I Learned to Stop Worrying About Visible Panty Lines and Conquered the World," says women are turning to humor right now “because it's so much more effective than weeping or banging your shoe on that table!” She says, “The point of satire is not only to illustrate the absurdity of things but to show what the world looks like when it's turned upside down.”

Amanda Marcotte, a feminist commentator and author, says, “Things have just gotten to the point of absurdity that you can't react without being absurd yourself.” Thanks to recent attacks on even contraception, “ordinary women who often don't pay attention to politics are finally beginning to pay attention,” she says. “And I think that means more opportunities to communicate through humor instead of the typical outrage thing. Humor can be very clarifying.”

Meg Wolitzer, author of "The Uncoupling," a fictionalized account of a sex strike, points out, there’s a long tradition, “starting with Aristophanes and continuing up through a strange episode of "Gilligan's Island" that I remember from my childhood,” of sex strikes being used for comedy. "Desperate times do call for creative and vigorous responses, and the assault on reproductive rights today certainly qualifies as desperate times. I think women need to find lots of ways to speak out and act, and this is just one,” she says.

You might ask how effective it is in bringing about actual change. Day says, “Historically, satire has often been dismissed as never actually accomplishing anything, because it is extremely rare to be able to draw a straight line from a piece of satire to a substantive political response, like a bill being passed.” (Although she gives the example of Jon Stewart and the Zadroga Act; Stewart helped shame Republicans who filibustered against extending benefits to Sept. 11 responders who died of cancer or respiratory diseases.) But this is “an overly narrow way to think about political efficacy,” she says. “When satire is successful, it functions to shift the terms of the wider public discussion. And that, in itself, is a big deal.”