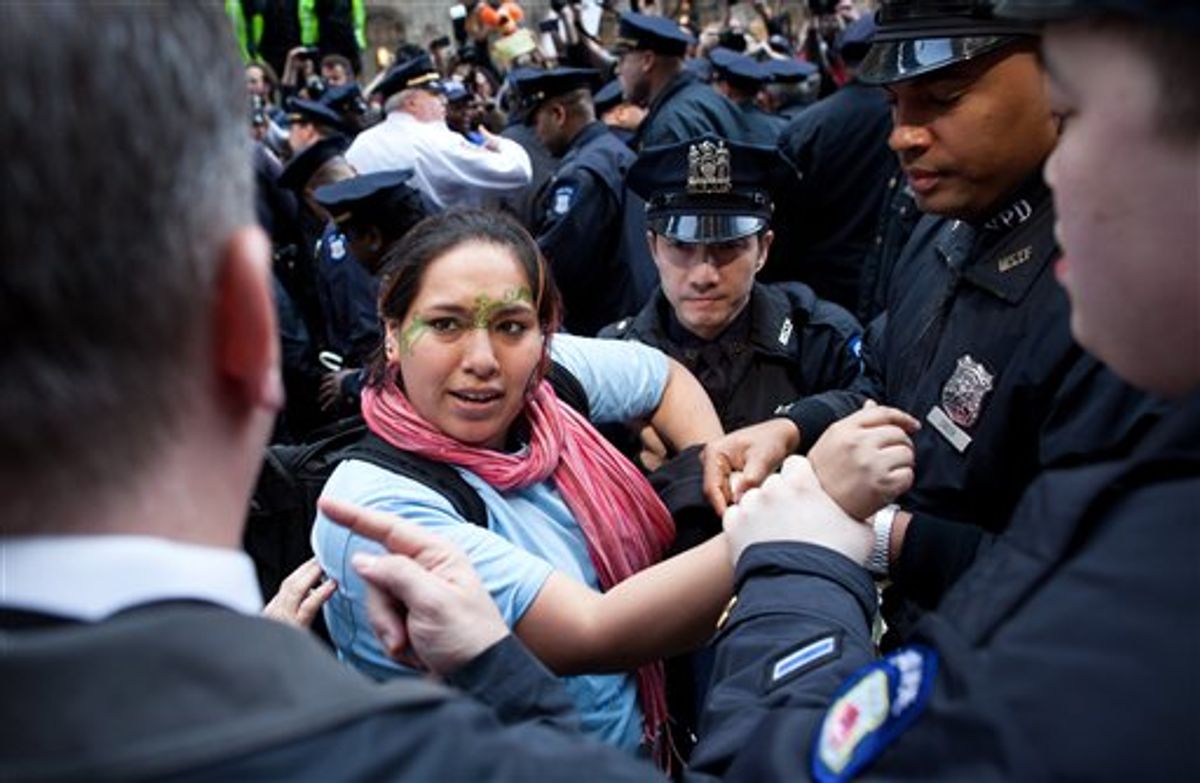 It's been six months since Occupy Wall Street first inserted itself into public space and consciousness, so writers and pundits this past week have clamored to quantify and assess the movement: What has Occupy achieved? What next for Occupy? This semi-anniversary has prompted a demand for Occupy's Greatest Hits.

It is important to note the homes saved from foreclosure by Occupy actions; the policies and mainstream political conversations that Occupy has influenced, both directly and indirectly; the growth in awareness about income inequality, police brutality and racism; as well as the port shutdowns and short-term disruptions to consumer and corporate activity Occupy has notched on its many belts. But any articles aiming to sum up the Occupy effect will miss the point. The temptation for writers is to historicize -- to churn out articles, books and anthologies about "what really happened" and what it all means. It's tempting because it sells and it sells because, well, it feels like something did change since last September and, for a small number of us, at least, the world feels different now that there is Occupy.

There is, however, no linear historical construction of the past six months that could do justice to the diffuse assemblage that is Occupy. There's no adequate explanation for why, for example, on Saturday, it was beautiful to go back to one of the dreariest slabs of concrete that lower Manhattan has to offer and find nearly a thousand other bodies -- dancing, chanting "a-anti-anti-capitalista," catching up and dashing off into spontaneous street marches to mark six months since the first occupation of Zuccotti Park.

There were 73 arrests at the OWS six-month anniversary gathering -- a number of them violent as police surged in to clear the small park of the almost 300 protesters who filled the space just before midnight. One young woman, a long-term Occupy supporter named Cecily McMillan, 23, suffered a seizure after NYPD officers aggressively tackled her (cracking her ribs) and put her in plastic handcuffs. Others arrested in Zuccotti tweeted about injuries inflicted by police on Saturday night. Jesse Myerson described some of the worst police action in the park on TruthOut: "I watched the police break up the group by punching protesters about the head, repeatedly stomping on shoulders and arms, grabbing throats, dragging protesters by the hair and clawing at their faces," he noted.

Once the space was cleared and guarded by barricades, a march of evicted protesters spilled into lower Manhattan, snaking up through SoHo to Union Square, taking opportunities to run off the sidewalks into the streets before cops on scooters could catch up. "If they get too close, just hit them," I heard one officer on a scooter tell another as a crowd moved through them at an intersection. Numerous marchers were arrested, including one young man (an OWS street medic) who was shoved so hard into a glass door by police that the impact of his skull cracked the glass. Photographer Stephanie Keith caught this image moments after the incident: And, just like the early Occupy days, police repression has galvanized further action: Solidarity marches were called by Occupy Wall Street, L.A., Oakland, Chicago, Boston and more on Sunday evening in response to the New York arrests. A few dozen people are also attempting to launch an occupation (albeit without tents) at Union Square in New York; 20 Occupy supporters spent the night there Saturday. Which points to the other reason why assessing and quantifying the Occupy movement at this six-month point is mistaken -- as the unified cries of "spring is coming" and "now's the time for general strike" in Zuccotti Park on Saturday suggested -- it's just about to kick off.