It\'s a matter of when, not if, say Cornell economists 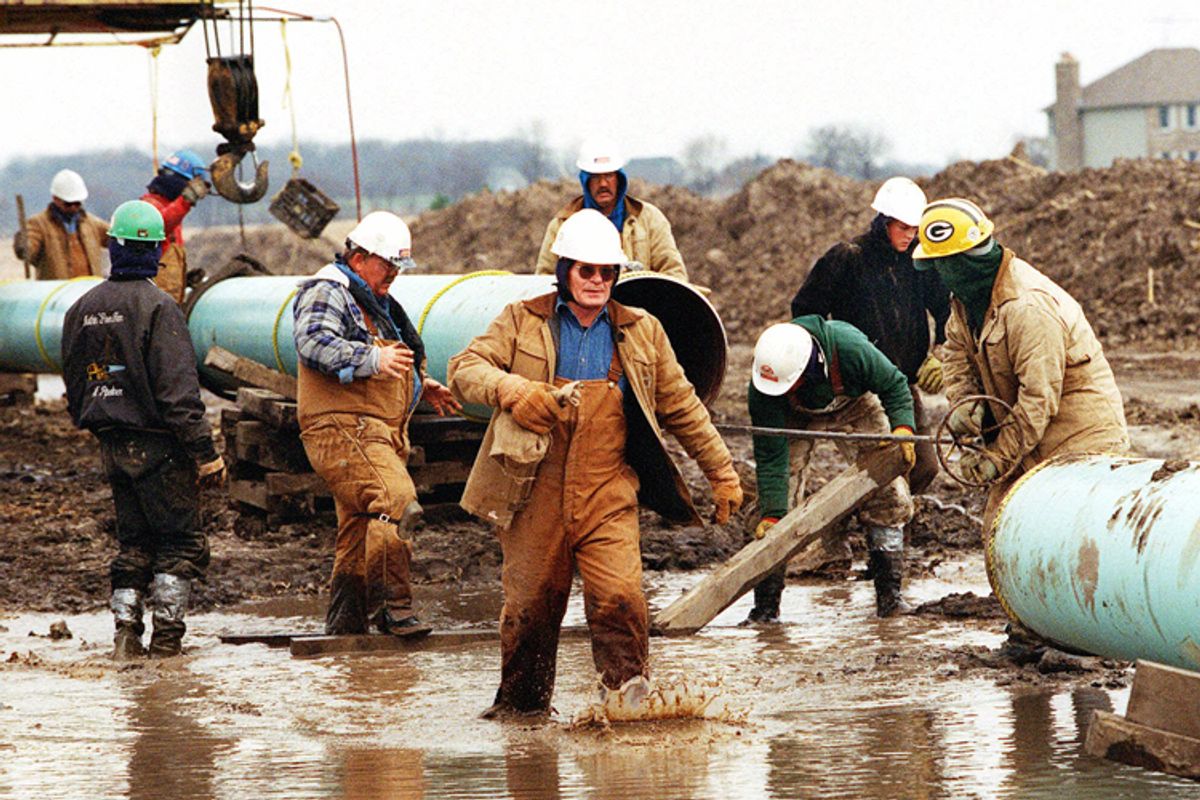 Members of the "chain gang" assemble a pipeline near Burlington, Ill. (AP)
--

Republicans have sought to frame the Keystone XL pipeline as a job-creating project being thwarted by “radical environmentalists.” Is it? A new Cornell University study claims that the pipeline could actually have a negative impact on the economies of the states it would pass through.

“In the national debate, job creation has been set alongside environmental concerns in a rigid either-or fashion," says Sean Sweeney, one of the study’s authors, "But oil spills also kill jobs, they consume resources, they have an impact on health, and can also lead to a lower quality of life.”

The range of estimates of jobs vary widely. TransCanada claims the pipeline will create 20,000 jobs. A State Department report estimates that only 20 permanent operating jobs would be created in the six states along the pipeline route. By comparison, those same states are home to robust agricultural, ranching and tourist industries that are dependent on water and vulnerable to environmental contamination. Across the six states agriculture employs 571,000 workers and tourism 780,000; the total revenue from those sectors, respectively, is $76.3 billion and $67 billion.

Tar sands oil — known in energy circles as diluted bitumen — may be more damaging to environments and communities than regular crude. Said Sweeney, “Diluted bitumen is an irregular substance — it runs thick and thin, hot and cold. It’s basically a sludge, not like regular crude — it behaves differently.” Tar sands also seem more likely to spill than conventional crude: The spill rate for diluted bitumen in the northern Midwest between 2007-2010 was three times the national average for conventional oil. This may be because the heavy, corrosive material puts greater stress on pipelines.

The already existing Keystone I pipeline, which runs 2,100 miles from Alberta to Illinois, began operating in 2010; in the two years since, 35 spills have occurred. In the pipeline’s first year of operation alone, its spill rate was 100 times TransCanada’s projection. All told the amount of tar sands oil being transported through the United States has more than tripled in the past decade to 600,000 barrels in 2010. Keystone XL, if built, would add another 830,000 barrels per day.

John Stansbury, a professor of civil engineering at the University of Nebraska, analyzed spill data from the Keystone I pipeline to estimate that 91 spills would occur over the course of 50 years of Keystone XL’s operation — close to two spills each year.  In a worst-case scenario, he says, a spill could contaminate 4.9 billion gallons of groundwater in Nebraska’s Sand Hills with benzene, a known carcinogen.

The threat the pipeline poses to Nebraska’s Ogallala Aquifer, which provides 30 percent of the irrigation water in the U.S., has been much-discussed, but the pipeline would also cross another 1,747 bodies of water, including the Yellowstone and Missouri Rivers and the Carrizo-Wilcox aquifer, the third largest aquifer in Texas.

If Keystone were to leak — or worse, rupture — the consequences could be serious. In July 2010, a pipeline operated by the company Enbridge ruptured — the company has never explained why — spilling 1 million gallons of tar sands oil into Michigan’s Kalamazoo River. The oil drifted 40 miles upstream, causing 145 reported instances of illness and health problems for people living in the riverside community of Marshall, Mich. Marshall residents living within 200 feet of the river were eligible for a buyout program; about 130 people sold their houses to Enbridge, leaving some areas uninhabited.

The Kalamazoo cleanup has cost $725 million so far — twice as much as Enbridge estimated — and the river remains closed to fishing, hunting and other recreational activities over a year and a half after the spill occurred. Officials in the Calhoun County Health Department have said some bitumen will likely remain in the river “indefinitely.” Sweeney points out that the rural areas along pipeline routes are unprepared to cope with spills.  “They had to bring someone in from the Gulf to deal with Kalamazoo,” he explained.

While the Kalamazoo spill was the biggest-ever tar sands spill, pipeline spills occur with startling frequency. In 2011 alone, there were 600 reported pipeline incidents. TransCanada’s website argues that “if they do occur, pipeline leaks are small,” yet pipeline spills caused 17 deaths and 68 injuries, and over $335 million in property damage. In 2010, when the Kalamazoo spill occurred, the damages from pipeline spills topped $1 billion. While pipeline spills don’t get the attention of disasters like the Exxon-Valdez and BP, they point to a familiar pattern of underestimating risk and underpreparing for disaster.

TransCanada insists that it will comply with all federal regulations, and construct and operate Keystone XL “to the highest industry standards.” Danielle Droitsch, an attorney with the National Resources Defense Council, argues that we don’t know enough about diluted bitumen to be able to transport it safely. "We’re building these pipelines as if they were conventional oil pipelines,” she said. “We don’t have any special regulations in place to deal with the fact that these are tar sands pipelines and they are very different. Until we have a new regulatory system in place there are no safety measures proposed that would make this pipeline safer.”

And in the meantime? “There’s no question this pipeline will spill — it’s a question of when."