Mike Daisey and the inconvenient truth 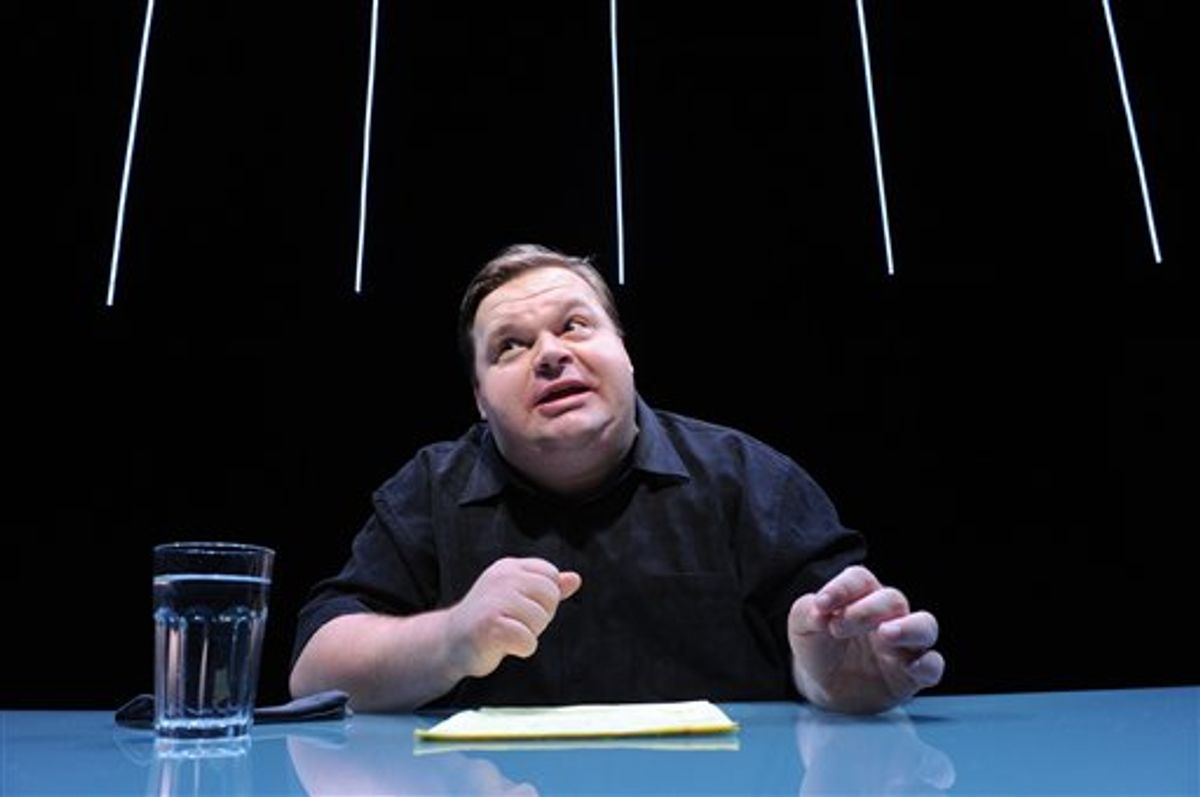 In this undated image released by The Public Theater, Mike Daisey is shown in a scene from "The Agony and The Ecstasy of Steve Jobs," in New York. Daisey, whose latest show has been being credited with sparking probes into how Apple's high-tech devices are made, is finding himself under fire for distorting the truth. The public radio show This American Life retracted a story Friday, March 16, 2012, that it broadcast in January about what Daisey said he saw while visiting a factory in China where iPads and iPhones are made. (AP Photo/The Public Theater, Stan Barouh) (AP)
--

I can’t be the only listener who thought this past weekend’s edition of “This American Life,” the public-radio show, was among the most compelling work Ira Glass and his team of producers had ever done. As I sat in my rental car stuck in Los Angeles gridlock listening to the radio, I felt certain I was part of a community of people across the country listening to the radio thinking Unbelievable.

Episode 460, “Retraction,” was an hour-long correction to Episode 454, “Mr. Daisey and the Apple Factory,” which aired January 6. That episode was a special hour-long condensation of Mike Daisey’s one-man show, “The Agony and the Ecstasy of Steve Jobs.” In that show, which ended Sunday in New York and heads next to Washington, D.C., Daisey recounts his trip to China to interview workers in the Foxconn factory, which makes Apple products. And in fact that episode — in which Daisey describes meeting workers who had to sleep in prison-like barracks; whose hands shook from the neurotoxins in cleaning solutions that Apple forced them to handle; whose arms were mangled from industrial accidents for which they were not compensated — had also been among the most compelling hours of radio I had ever heard. It launched Daisey into a role as a nationally prominent critic of Apple, appearing on MSNBC and elsewhere.

But it turned out that Daisey had invented some scenes, exaggerated others, and could not prove the veracity of still others. The flim-flammery was uncovered by a China-based “Marketplace” reporter who heard the Daisey episode and thought it sounded fishy. He tracked down Daisey’s translator — whom Daisey, during the “TAL” fact-checking process, had told Glass and his producers could not be found — and she said, in effect, that much of what Daisey said in his show, and on the radio, had not happened that way.

For the details, go listen to “Retraction” — not for nothing did Steve Martin tweet, about this episode, “A standing ovation and a boy scout salute to the dignity of ‘This American Life.’” Or you can read the transcript here. Not only is the episode Tylenol-like in helping a trusted brand recover from a notorious tampering scandal, but it reveals Ira Glass to be a ruthless cross-examiner. The scenes in which he grills Mike Daisey about his deceptions — in which we hear Daisey’s long silences, which Glass cruelly refuses to edit out, and Glass’s blunt declarations that “I don’t believe you” and “I think you’re kidding yourself” — reveal Glass to be something of a radio avenger for truth. When print journalists fabricate stories, or even just make severe errors, we readers are never privy to their dressings-down by their editors. Daisey had the misfortune of going unethical on a radio show, on Ira’s show, and now Ira goes all Foxconn on Daisey, as America listens.

There is no question that Daisey got what he deserved, and that Glass did what he had to do. In fact, I can’t get over the schadenfreude of hearing a malefactor get his comeuppance so publicly.

On the other hand, I still like Mike Daisey.

Mike Daisey should not represent as literal truth what he has edited and exaggerated for dramatic purposes. I don’t buy the excuse he presented to Glass that what he does is okay onstage, and only problematic when transferred to public radio. (Before Sunday’s show, which included some changes to the script to make it more accurate, he stood by his work as a whole, and said news organizations like The New York Times verified his big-picture story about working conditions at at the Chinese factories.)

That said, there but for the grace of my own inferior career go I. If people paid me to tell stories onstage, I know I would exaggerate the heck out of them. It would not be right, but I am not sure I could help myself.

There is a difference between the personality of the raconteur and the personality of the journalist. Raconteurs love a good story, while journalists love nailing down elusive facts. There is overlap between these two types, lots of overlap: the best journalists love it when the facts come together in an elegant narrative arc. But it’s a useful distinction. Even though he worked in print, the New Yorker’s Joseph Mitchell, for example, was clearly more raconteur than journalist; his favorite people were storytellers, his own writing always story-driven, and we know that he sometimes did not let the facts get in the way.

Fortunately, there is work for people who prefer raconteurship to reporting: they can become fiction writers, perhaps thinly veiling the facts of their own life, but taking liberties with them. Or they can become storytellers, as on the popular “Moth Radio Hour” or, as it happens, on “This American Life,” whose David Sedaris has been charged with improving on the facts. Or they can become monologists like Spalding Gray, or like Mike Daisey. What they can’t do is claim that taking liberties with facts gets them closer to the truth.

Daisey’s genius has been bringing an investigative zeal to his monologues, which often have an edge of social criticism. They are about monopolies, or homeland security, or, in the case of his monologue “Truth,” about the responsibilities that art owes to life. “Truth,” from 2006, was about the cases of James Frey, J.T. LeRoy and Fernando Pessoa — which prior to Daisey himself were among the most famous recent cases of writers who were not what they said they were, and the prices they paid, or did not pay, with audiences. Daisey’s project has involved bringing journalism to raconteurship: going out and finding the stories, traveling for them, rather than just recounting what life has strewn in his path.

This appealing fusion of the dramatic, raconteuresque monologue and investigative journalism surely helps explain why audiences responded to Daisey as an original talent. The problem that Daisey has not yet solved — and that, in “The Agony and the Ecstasy of Steve Jobs” — he chickened out of solving, is how to artfully construct a monologue that is not purely factual and not lose an audience in the process. How about if he tries this: Trust the audience and tell them that’s what you’re doing. When artists of nonfiction, whether in radio or in print, shade the truth while refusing to call their work fiction, they are trading on the frisson, the immediacy, that audiences feel when something powerful is also true. Thus the impulse to call something memoir when it’s not memoir, or to collapse time and rearrange events for effect (like George Orwell in “The Road to Wigan Pier”). There’s a way to train audiences to love the mostly-true, the improved-but-still-basically-factual. We need to learn how to love this hybrid, because as Mike Daisey shows, it’s the next great art form. But we need to be honest about what it is. Our love must be true, not purchased with lies.