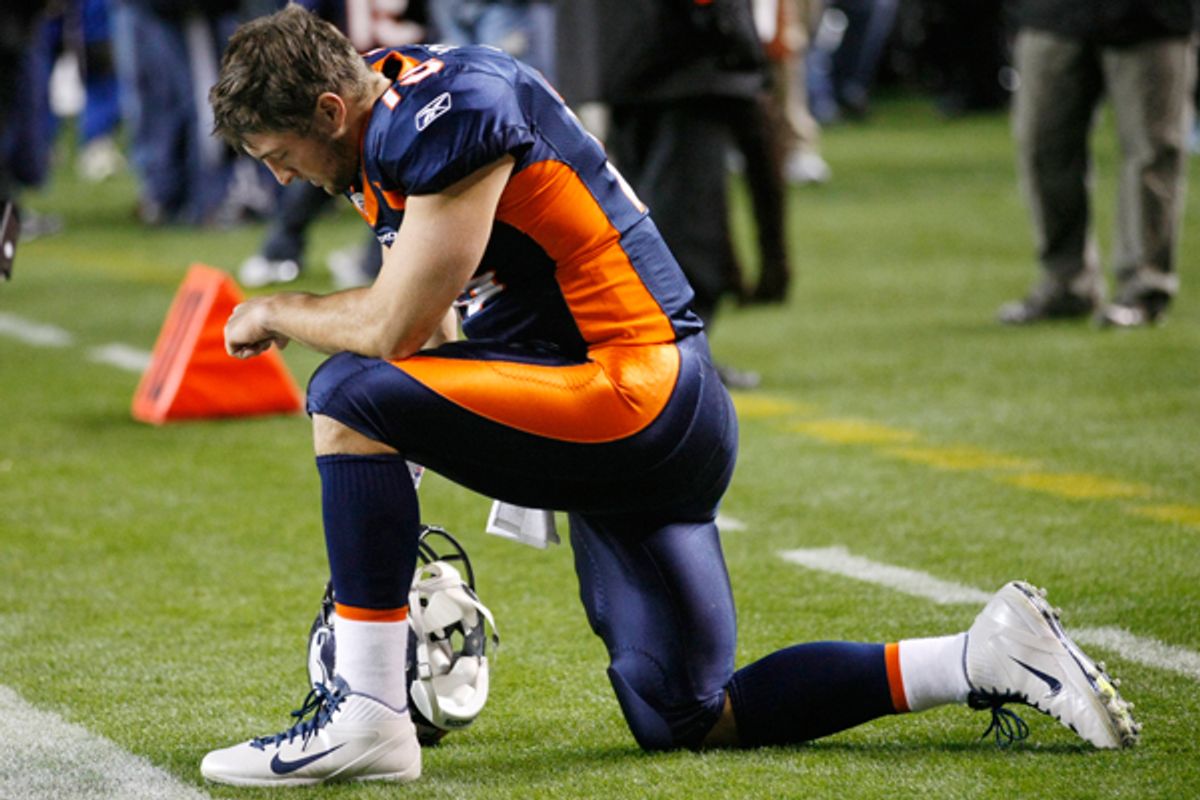 You don't need to be an evangelical Christian to care about the future of Tim Tebow. I’m a lapsed atheist myself. But with the resurrection of quarterback Peyton Manning in Denver, I wonder most about the future of the spiritual scrambler, who led the Broncos to the playoffs last year.

The Broncos signing Manning to replace Tebow is a no-brainer. He may be diminished by age and injury, but he is also the best quarterback of our time, not because he is a brilliant coach’s puppet (Tom Brady) or an on-field, off-field brute (Ben Roethlisberger) but by virtue of a fierce work ethic and a concentrated intelligence that is contagious and inspirational. Whatever is left at age 35 of him will make the Broncos better.

Through 14 years and two Super Bowls with the Indianapolis Colts, there was something reassuringly manly about Manning, his cool leadership, his laconic but friendly demeanor, his thoughtful professionalism, that evoked my role models on the Encore Westerns channel like Marshal Dillon and Wagonmaster Flint. (Something went out of American life when the legend of the western hero was replaced by the myth of the sports idol.)

Tebow also evoked the TV cowboy for me, those boyish enthusiasts, Rowdy Yates and Deputy Johnny McKay, still learning but eager to make things happen. Tebow, in his second year at Denver last season, was rough edges and a wonk’s nightmare – his various quarterback ratings and statistics were low – but he did make things happen, as a team leader and a fearless runner when he couldn’t pass, which was often. He became a fan favorite because he tried so hard, often succeeding in the clutch toward the end of games, and a cultural phenomenon for bringing extreme praying to the mainstream tent. He was always ready to take a knee for God.

“Tebowing” became a something of a joke, which was unfair. He wasn’t cool about his Christianity, like so many athletes, including Jeremy Lin. He lived it. But his retrograde beliefs grated on most sports commentators, who tend to find it easier to understand the more traditional jock outlets of driving drunk and assaulting women.

Tebow was a quarterback whose arm, accuracy and game smarts were not considered elite -- yet he somehow won anyway. God forbid it was the confidence he got from his faith. But isn’t sports about teaching kids that you can make it if you try hard enough?

Assuming that Tebow will not be kept on in Denver to make Manning even better (as running back or tight end, for example), it figures that he will soon be dealt off. The Miami Dolphins would be a good fit. Tebow’s success at the University of Florida makes him a local hero, and the large Jewish population might give him the chance to refine his other controversial skill, performing circumcisions. He needs to sharpen the technique he practiced at his father’s evangelical ministry in the Philippines.

In Miami, Tebow can mix a little profane with his sacred, hanging out with the Heat basketball star LeBron James, dubbed by author Scott Raab as “The Whore of Akron” for leaving Cleveland to take his talents to South Beach, an American Sodom that could use a missionary like Tebow.

A more serious issue for the NFL is what to do about the defensive unit of the New Orleans Sinners, who, under the supervision of a seasoned, respected coach, instituted cash bounties for knocking opponents out of the game. A good, hard hit that put a rival player on a stretcher might be worth $1,000. As it turned out, this was not aberrant behavior in the National Football League, although it was against the rules, and, I thought, against the spirit of the game.

It may also turn out that the neck injury that kept Manning out of football last season was originally suffered in a game against New Orleans. Could he have been a targeted hit? How much to sack him, to knock him out of the game, to end his career? Just for money, a victory and bragging rights? Doesn’t seem very manly. Football is supposed to have the madcap gallantry of a World War I cavalry charge, not the mean cowardice of a drone attack.

The best we can hope for is that the thuggish Saints coach and the wimps who didn’t have the moral courage to stand up to him are suspended for the season, one less concern as Manning revives his exemplary career in Denver and Tebow, wherever in God’s name he ends up, finds spiritual satisfaction.

UPDATE: So Tebow is going not to the Miami Dolphins but the New York Jets. New York will still give him a large circumcision roster for his shaky arm and a Sodom for his faith-healing, but it will also test him cruelly. It might seem that New York fans would mock his kneeling ways and his anti-abortion stand, but they will also forgive anyone who wins. Will the temptations of the Big Apple be Tebow’s downfall? I hope not. Lord knows the Jets need that mindless confidence that only faith supplies.

And as to the New Orleans Saints: the League stood tall, suspending not only the defensive coach, but the head coach, and penalizing the franchise. There may be further penalties for the players involved. One should not have expected less, of course, as football faces lawsuits and moral indictments for its long failure to deal with head traumas.

Robert Lipsyte is a former New York Times sports columnist. His new memoir, "An Accidental Sportswriter," has just been published.