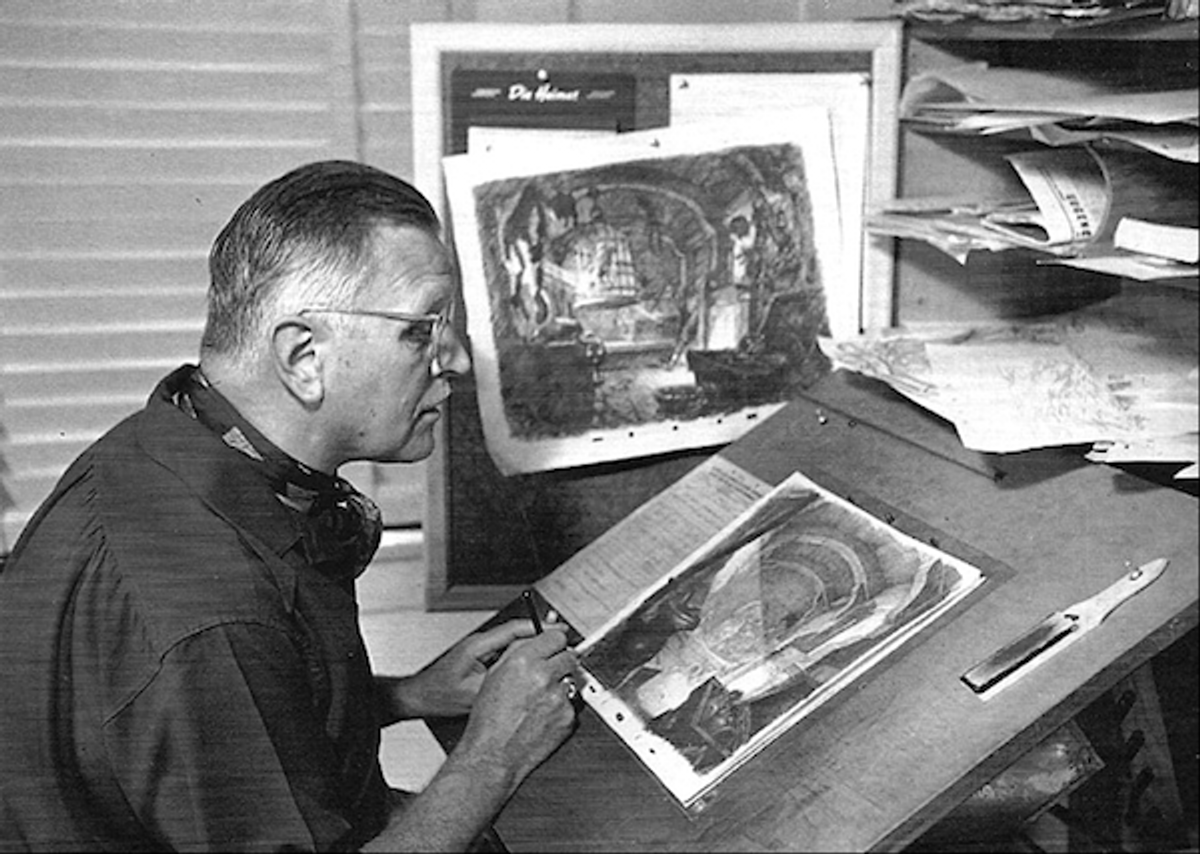 In 1948 Simon and Schuster published a book titled "He Drew As He Pleased." It's a tribute to Albert Hurter, an inspirational sketch artist who worked at the Walt Disney Studio from 1931 until his death in 1942.

The book itself was planned and prepared by Hurter himself and, as outlined in his will, he personally picked Ted Sears (Fleischer animator/Disney storyman) to compile the material and write the forward introduction. The drawings are wonderful and recall the fantastic work of artists like Heinrich Kley. Hurter's function at the Disney Studio was to create drawings that would inspire the artists, animators, and story people. It's mind-blowing to consider in our modern-day industry of tight deadlines and tighter budgets, someone whose job it is to simply sit and draw to inspire a group of production folk. You'll recognize drawings that later evolved into production elements used in numerous productions of Disney's "Silly Symphonies," and the features "Snow White," and "Pinocchio." There are even some images that look like they could have inspired characters in later Disney features such as "Lady and the Tramp" and "Beauty and the Beast."

What also intrigues me ― and is evidence of the high level of regard and respect Hurter garnered at Disney ― is the strong endorsement of Hurter and his influential body of work, by the Disney Studio and Walt Disney himself. You have to keep in mind that other than the occasional magazine article and some "How To" publications like the ones by Preston Blair, there was very little available back then that showed how animation was created behind the scenes -- especially at Disney. There was E.G. Lutz's "Animated Cartoons" published in 1920 (and used by Walt Disney to help learn animation fundamentals in his Kansas City years), Nat Falk did the instructional "How to Make Animated Cartoons" in 1941 using the Terry-Toons Studio as a resource, and Robert Feild wrote the in-depth "The Art of Walt Disney" in 1942 (these are books I'll be doing profiles on in future Imprint postings), but I know of nothing back then that showcased the work of one specific animation artist like "He Drew As He Pleased" does.

I've included the entire introductory text by Ted Sears and chosen a select group of images to reproduce, but if you're a fan of illustration, design, and Disney history, I wholeheartedly suggest tracking down this book ― if you can find it.

[caption id="attachment_280131" align="aligncenter" width="485" caption="These studies are titled, "Wicked ones...". Perhaps Hurter's sketches were referenced for this sequence in "Lady And The Tramp""]

[caption id="attachment_280161" align="aligncenter" width="369" caption="John Canemaker's "Before The Animation Begins" Hyperion 1996. A wonderful analysis of the inspirational artists of the Disney Studio. Canemaker launches his profiling treatments with one on Albert Hurter."]

Thanks go to Zero Lastimosa for his assistance in scanning this material.