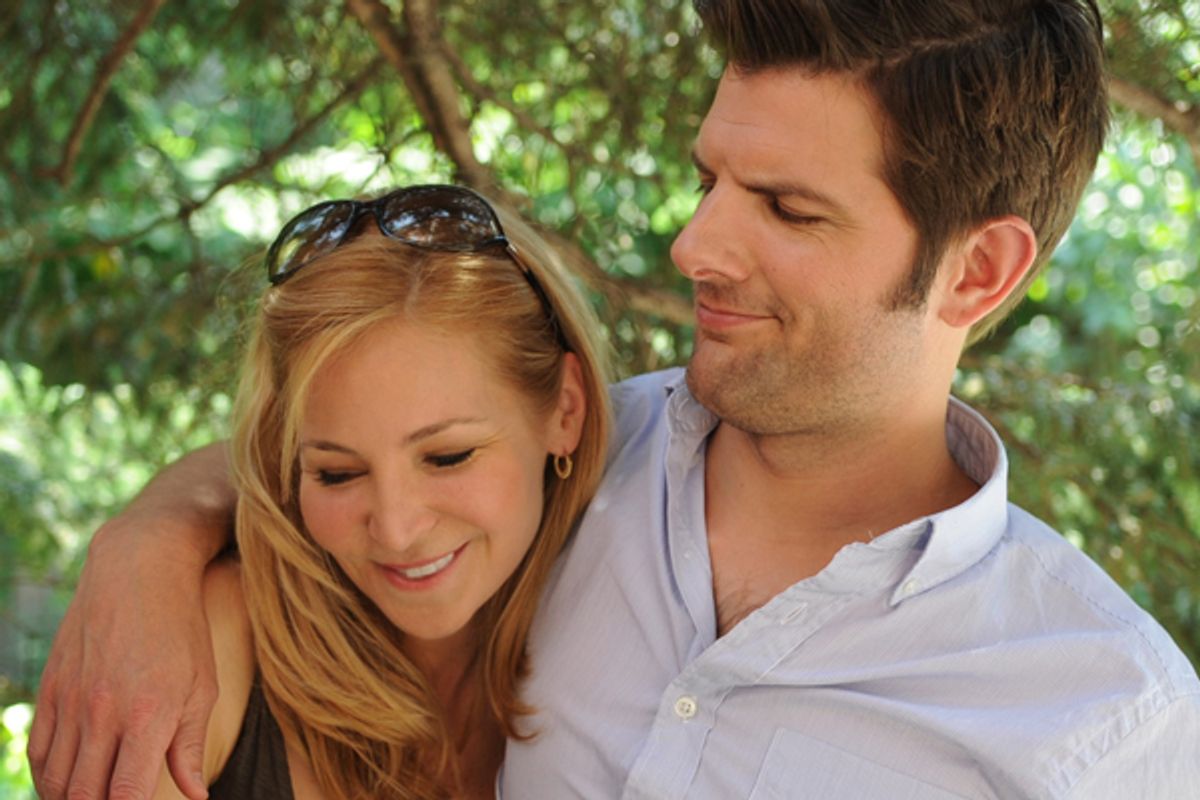 Jennifer Westfeldt and Adam Scott in "Friends with Kids"
--

The most prominent press for Jennifer Westfeldt’s recently released movie, “Friends With Kids," was a New York Times Magazine story that is adequately summarized in its self-conscious tabloid-tease headline: “Jennifer Westfeldt and Jon Hamm Give Birth (to a Movie).” Four to five paragraphs are devoted to the question of whether Westfeldt, 42, and Hamm, her partner of 14 years, want or wanted children, and why or why not. But if the film – which Westfeldt wrote, directed and starred in – is supposed to be a window into her psyche or her life choices, I’d argue that the appropriate autobiography-is-destiny question is not why they don’t have children, but why, after 14 years together, they aren't married. “Friends With Kids” is not so much a movie about friendship or kids as it is about marriage – what it’s for, and what happens when you decouple it from what previously made it compulsory.

The act of having kids in and of itself is strangely unexamined in the movie. When, in the opening scenes, Julie and Jason, the blithely pleasure-seeking Manhattan professionals played by Westfeldt and Adam Scott, reel with horror at the lives of their friends, it seems less about what their children are doing to them, or vice versa, than what the parents are doing to each other (sniping at each other; not having sex). When Jason and Julie come up with the central conceit of the movie, having a child together as best friends while keeping their romantic and economic lives separate, they spend basically no time wondering whether they want to be responsible for bringing another life into the world.

In real life, a recent survey of "white collar" people born between 1965 and 1978 -- people like the characters -- found that 42 percent of the women and 32 percent of the men did not have children, but in the movie, the desire to reproduce is treated as a given. On the movie's own terms, the characters have visibly strained relationships with their own parents, at least for the few minutes they're in the movie, and you might wonder whether that would give them pause about being parents.

Hamm is often asked why he hasn’t married Westfeldt, and it's usually along the lines of this version: “I don't have the marriage chip, and neither of us have the greatest examples of marriages in our families. But Jen is the love of my life, and we've already been together four times longer than my parents were married." Briefly glimpsed in the movie, Jason’s parents are cold and withholding, except when they're writing a check, and Julie’s mother, abandoned by her husband years before his death, delusionally calls herself a widow; Julie later declares that it’s Jason and their child who are her real family, even before the it’s-not-even-a-spoiler romantic ending.

We don't exactly know why Jason and Julie's parents are miserable, but we are given to understand why their friends are: Their marriages are strained by their pressure of trying to be all things to each other. The person who probably began as a lover – basically all we ever know about Jon Hamm and Kristen Wiig’s characters before they become melodramatic drunks is that they used to have sex all the time – or a best friend now has to be not only a roommate but a co-parent and even a business partner. Add to that the presumption in the movie, and of their class, that things are going to be split down the middle between men and women and you have some very testy wives and some very defensive husbands.

When Julie and Jason's deal is announced, friends who picked the more traditional path justifiably, if narcissistically, take this as a judgment on their own lives. They resent their friends for trying to order à la carte, perhaps because on some level they want to be validated for struggling while others have it easy. But Jason and Julie are already best friends, and they live in a time where women don't need men for economic survival, and neither men nor women need marriage to have sex, and women can have sex without having babies.

They essentially decide to specialize: They will co-parent and share the physical, emotional and financial responsibilities of a child equally. The physical stuff that can’t be shared – pregnancy, breast-feeding – is skipped over in a flash. The emotional seems effortless for both of them, and the financial will be shared equally, even if Jason makes more money. In the beginning, this works beautifully. It doesn't take long for both Jason and Julie to find mates that check off all of the boxes that they don't seem to check for each other: A nubile, video-game-playing Megan Fox for him, a handsome but sensitive, workload-sharing Ed Burns for her.

The question is, Why does Westfeldt ultimately decide this won't be enough for her characters, and offers a turn that is either numbingly predictable or an ultimate salvo for traditional nuclear families? It's true that in our society, educated people like Julie and Jason actually marry at higher rates than their less-educated counterparts, despite -- or perhaps because -- of the examples set by unhappy parents. They're likelier to get married later, and stay married. Their children doubly benefit from their parents' dual incomes and their cultural and intellectual capital. Even as the movie seems to question whether we should be less picky about our prerequisites and implicitly critiques mating and dating as fleetingly satisfying consumer choices, there's a consumer argument for marriage too.