How the rich took over airport security 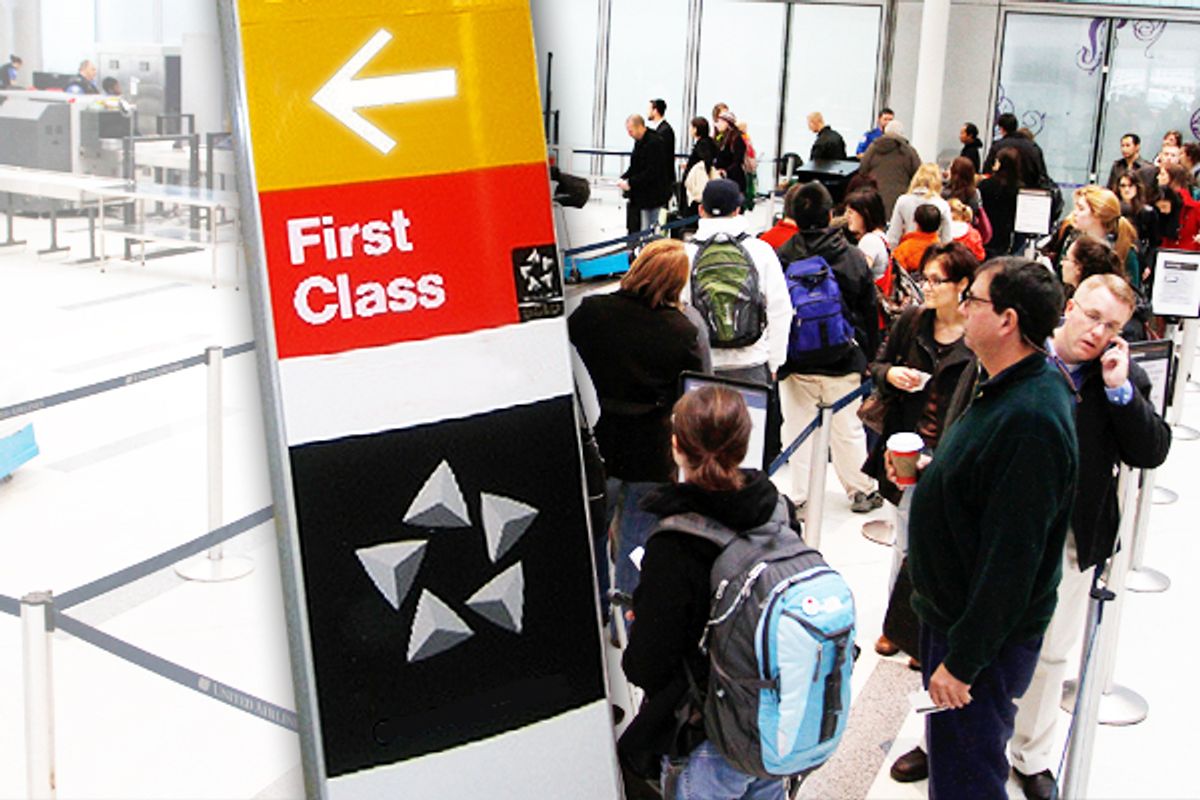 The other day at Bergstrom Airport in Austin, Texas, I witnessed a striking manifestation of the new American plutocracy. Along with getting a photo at the Department of Motor Vehicles and sitting in a jury pool, standing in line at airport security with a mob of other people, miserable though it is, remains one of the few examples of civic equality in our increasingly oligarchic republic. Much airport security, of course, is theater, designed to provide alibis for bureaucrats and politicians in the event of a terrorist attack. But while we can debate what a rational airport security system would look like, no rational system would discriminate among passengers on the basis of ability to pay.

That is what makes the policy of Delta Airlines so shockingly un-American.  In Austin, Delta had not one but two lines that fed into the Transportation Security Administration checkpoint area. One line was mixed race, mixed class and mixed age. The other line was usually empty. Now and then a white, middle-aged man would appear in the second line and the first line would be halted as he went directly into the TSA checkpoint.

“Who are those guys?” I asked a TSA officer, when I reached the front of the second-class citizen line.

“Delta has total control over the passenger line all the way up to here,” the officer answered. “They’ve decided to let priority passengers as well as pilots and steward staff go through ahead of others.”

“So that’s the rich white guy line?” I asked.

The TSA officer laughed. “On our side of the line, everybody is equal.”

Now I would be the first to concede that what Delta and other airlines do beyond the government security checkpoint at the gates that lead to airplanes is their business. At the moment, the model of America’s pathetic, predatory, deteriorating airline industry seems to be eking out nickels and dimes by playing crudely on the snobbery of their customers, with the use of two separate lines at the terminal gates, one for priority passengers — labelled, by various airlines, Gold, Platinum, Elite and so on.

The priority line, needless to say, goes to exactly the same door and entry ramp and does not get the “elite” to its destination one second earlier. Neither de Toqueville, who commented on the contrast between the status obsessions of Americans and their professed democratic egalitarianism, nor Veblen, who coined the term “conspicuous consumption,” would have been surprised by this method of showing off. Such silliness is a matter for satire, not lawsuits or protest marches.

But going through airline security is different. It is not a choice, like belonging to an airline’s frequent flier points club. Security screening is an onerous civic duty. Like other civic duties, it should be shared equally by rich and poor alike. Remember the motto of Jacksonian populism? “Equal rights for all, special privileges for none.”

Nearly all the airlines now allow well-heeled passengers to pay for the privilege of cutting ahead of the rest of us at the TSA checkpoint. At many airline checkpoints there are two lines. The long line looks like America; the short line is made up mostly of affluent white men.

Is this the future we Americans want: two lines at all airline security checkpoints, one for the privileged 1 percent and the other for the 99 percent, who have to stand aside to let the people with lots of money pass?  Alas, it appears that making economic apartheid formal in U.S. civil aviation is a bad idea whose time has come. The TSA is experimenting with a “precheck” program with built-in class discrimination, including the government’s crony-capitalist invitation of frequent fliers from private U.S. airline programs, but not other American citizens, to participate:

If you are a United States citizen and are currently a member of CBP’s eligible Trusted Traveler programs (Global Entry, SENTRI, NEXUS), you are automatically qualified to participate in the TSA Pre ™ pilot as long as you are flying on a participating airline at a participating airport. (If you’re a more frequent flyer with Delta or American, you must opt in to the program by responding to the communication sent to you, which is why it’s important to find that email and follow the directions in it.)

In other words, if you do not fly frequently — and most low-income and middle-income Americans cannot afford to — you would not be allowed to take part in this public government program.  In true crony capitalist fashion, the precheck program blurs the line between the government’s security function and the airlines’ purely commercial frequent flier programs.

The precheck program is advertised as an experimental program, holding out the possibility that after a period in which they are subject to more scrutiny than affluent business travelers, low-income grandmothers traveling to visit their grandchildren at last will be able to take part.  More likely, the precheck program would never be extended to the masses rather than the classes.  It would simply become another permanent perk of the elite, whose members would have no incentive to lobby for democratizing the program — rather the contrary.

But wouldn’t it help an overburdened airport security system to reduce the number of people to be rigorously screened by TSA?  Not if it means more screening for low-income grandmothers and less for frequent business travelers.  Indeed, as anti-terrorist measures, trusted traveler programs allowing affluent people who are frequent international travelers to be subjected to fewer security procedures might well backfire. Osama bin Laden and Mohamad Atta were members of the affluent social and educational elites in their countries who lived abroad and traveled frequently.

These “trusted traveler” systems will not make America safer. Their unacknowledged purpose is to create yet another area of American society that is privatized and segregated by class, to the benefit of the mostly white economic overclass.

Very well then. Why don’t we just make the new class-based discrimination official? Instead of leaving it to airlines and other corporations to construct the new apartheid piecemeal and informally, let the government issue a Premium Elite Citizen Card, valid for multiple purposes. For the right price, a price carefully calculated to be unaffordable by the majority of Americans, those willing and able to pay would be allowed to cut in line, not only at airports, but everywhere: at taxi stands, movie theaters, restaurants. All they would have to do is flash their Premium Elite Citizen Card to force the rabble to step aside and make way.  The degeneration of America’s democracy into a banana republic would be complete, once the Land of the Free became the Land of the Free Points With Membership.