The player who connects Kentucky basketball and Ted Kennedy

The best seat in the house is also at the end of the bench. For a Kentucky hoops walk-on, life's charmed and cursed 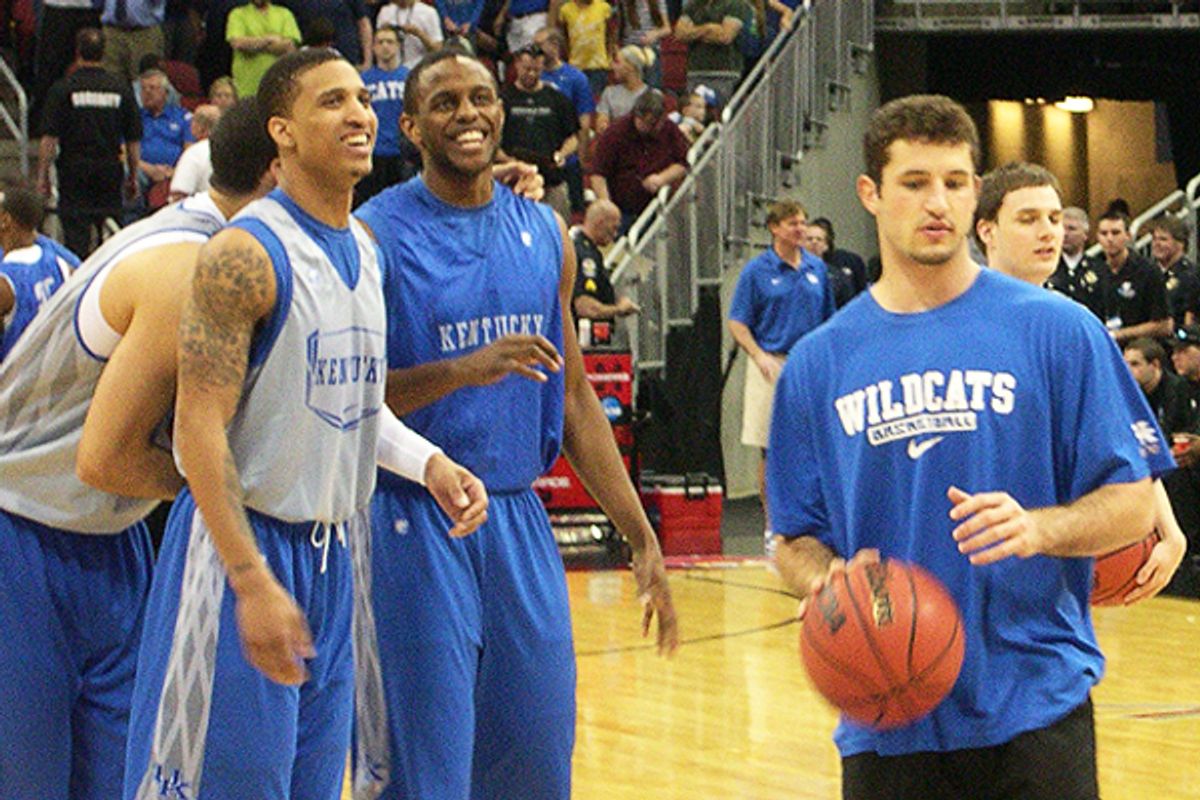 Wearing cargo shorts and a Kentucky basketball T-shirt, he walks with a slight limp through the cement underworld of the KFC Yum Center in Louisville, site of his team’s first stop along the road to their goal of an eighth NCAA tournament championship. A freshman listed at just 5-foot-11, Sam Malone looks more Sigma Chi than Kentucky Wildcat.

His super-elite, super-tall teammates stroll silkily along in Nike practice uniforms, a lustrous assemblage of future NBA players. Up close and in person, these are majestic human beings, particularly freshman player of the year Anthony Davis, the presumptive No. 1 pick in the upcoming NBA draft and he of the 7-foot-4 wingspan, and fellow All-American Michael Kidd-Gilchrist, a lethal blend of strength, speed and energy.

During Kentucky’s two wins here, Malone cheers on his soon-to-be millionaire teammates, and sets up the stools they use during timeouts. Watch your TV closely enough when Kentucky plays this weekend in Atlanta, and you might catch a glimpse of him as the camera pans to the huddle and coach John Calipari. If the game gets tight, there will be a reaction shot of Malone at the end of the bench, clutching a towel and holding onto a teammate. And you might ask: What's he doing there? Calipari's a master at grooming young talent for the NBA, so how did this kid with his two bum knees get a roster spot on the best team in college hoops? It turns out that his story manages to connect the slick millionaire coach with the Massachusetts Republican who once lost a Senate election to Ted Kennedy.

“I’m living a dream,” he says, surprised to be getting interviewed, and reaching into the athlete's bag of clichés with what sounds like a high degree of sincerity. “I feel lucky to be a part of this team.”

Sam gets courtside seats. Free Nike gear. Should the season culminate in another championship (Vegas gives the Wildcats 5-2 odds), he gets to snip down a piece of the net. Not to mention a championship ring. “Sam Malone is a great teammate,” says Calipari. “The guys love him. They all live together (in a dorm called Wildcat Lodge). He’s one of the members of our team, and the guys treat him that way.”

“The guys” are scholarship players, while college athletes who pay their own way to a school are called "walk-ons." Sam Malone is a walk-on, not that this totally explains his spot on the roster. The term reflects the idea that the athlete wasn’t recruited to campus but walked onto the court and tried out for the team. But sometimes walk-ons are recruited — to be walk-ons. “Human victory cigar” is another name, because walk-ons usually play only at the end of games, with victory safely in hand. Others just call them "Rudy," after the Notre Dame football walk-on immortalized in Hollywood. The assumption is that they work hard, but aren't very good.

But Sam commits as much time to basketball as the scholarship players, attending all practices, games, weight training sessions, team meetings. “It’s a real grind,” he says. And, he has to study a lot. Walk-ons are expected to excel in the classroom, since their GPA will be rolled into the overall team GPA. The team GPA will be reported in the press. Malone spends up to 50 hours per week on basketball and school, and recognizes the need to get superlative grades as a walk-on. “The coaches don’t tell us that, but we kinda know we need to do well.”

He got straight A’s his first semester in college, after being a 2.7 student in high school. “My teachers always said they saw the potential in me,” he jokes. “I feel I can set a good example for the team. Give back to the program that way.”

Coaches like to say walk-ons are of “high character” and good for team morale, which is true. If a prima donna walk-on ever existed, he or she didn’t last long. Since December, Sam’s contribution to the team has been solely through his off-the-court character and other contributions. On Dec. 20, the same day Sam learned his first-semester grades, he suffered a torn anterior cruciate ligament in a game against Chattanooga. It was Sam’s fourth knee injury in five years; he’s now had two major surgeries on each knee.

Sam Malone is from the coastal hamlet of Scituate, Mass., which is 30 miles from Boston, where the television show "Cheers" was set. His father, Joe Malone, the former Republican state treasurer, says he and wife Linda picked the name Sam not with Ted Danson’s character in mind, but because “we never met a Sam we didn’t like.”

Before getting injured, Malone played in six games for Kentucky, for a total of 13 minutes, and shot the ball six times, making three baskets. A shooting percentage of .500 is excellent, and a shot every two minutes shows confidence bordering on brazenness for a walk-on. Because he didn’t get to play much in practice, he kept in shape by riding a stationary bike next to the court, so relentlessly that assistant coach Orlando Antigua started calling him “Lance.” His fearless drives to the basket against taller players made him a fan-favorite on his home court in Lexington, and his Twitter account began blowing up in a basketball-obsessed state where, yes, everybody knows his name. He’s amassed 6,917 followers, just a few hundred shy of Kentucky Gov. Steve Beshear, who has 7,713. (Calipari is safely ahead of both at 1.1 million)

Though his knee blowout was a major disappointment, Malone says his first three made the latest one pretty routine. This time he was able to read his own MRI prior to the doctor’s appointment.

“The doctor came in and tried to break the news real delicately, and I told him it was OK, I already knew.”

Joe Malone says, “The doctor thought he was talking to a colleague. I told Sam he might want to consider orthopedic surgery as a career.”

The torn ligament was a replacement from a cadaver, an implant from a previous surgery, leading Sam to conclude, “The guy must not have been very athletic.”

His rehab is taking place at the Joe Craft Center at UK, a $30 million hoops megaplex on a road called Avenue of Champions. The facility is equipped with an underwater treadmill and hydro-therapy treatment whirlpools. While traveling for the tournament, he’s doing rehab in the hotel gym. Malone doesn’t see himself as a victim of bad luck, even though he totaled 13 minutes on the season, and his jersey number is 13. “I never thought of it,” he says, with a smile. “I picked No. 13 because the only other available number was 11.” The last player at UK to wear No. 11 was John Wall, the top pick in the 2010 NBA draft.  “I didn’t want to try to live up to those expectations,” Sam chuckles.

Perspective and sense of humor surely play a part in Sam Malone’s resilience, and perhaps he inherited a tenacious streak from his father, who ran unsuccessful campaigns for three higher offices: U.S. Senate, Massachusetts governor and U.S. Congress. (Joe Malone is now a businessman and political commentator.) He was defeated by Ted Kennedy in 1988, one race before Mitt Romney took his shot at the Democratic lion. Much of Sam’s high-school playing career was spent recovering from surgeries, when his dream was to play Division I college basketball.

It started at a young age, Joe Malone says. “With Sam and basketball, I’ve never seen a kid as passionate about anything in life.” At 13, Sam was playing against a superior inner-city team in a summer AAU tournament; he so impressed the opposing coach that he was recruited to join the team. The acronym AAU stands for Amateur Athletic Union, a nationwide entity that sets up games to showcase young talent. The team was based in a rough part of Boston called Mattapan, but Sam thrived in the change of scenery.

“He loved every minute of it,” says Joe Malone. “There he was trekking in and out of Boston, and he loved the game, the relationships, was totally dedicated, and had the dream of playing big-team college basketball from that day forward.”

Sam’s game improved, but in high school the injuries began and he lost valuable time to recovery. He didn’t play on the AAU circuit as much, limiting his exposure to college coaches and scouts. His senior year, as a player at Tilton School in New Hampshire, a bulky knee brace restricted his range of motion, but he still managed to average 14 points, nine assists and four steals, and was named a 2011 league all-star. Tilton teammates received scholarship offers to major basketball schools like Connecticut and Providence, but Malone’s options were limited to lesser schools, and as a walk-on.

Here’s where John Calipari came to the rescue. From the age of 8, Sam had flown to basketball camps at the University of Memphis, where Calipari coached before Kentucky. Those early years, Sam went accompanied by his brother, older by only two years. Memphis was the camp of choice for the Malone family because they were fans of Calipari from when he coached at the University of Massachusetts in the ‘90s. In the ’92 NCAA tournament, Calipari got a technical foul for being outside the coaching box, quelling a comeback rally against a Kentucky team that would advance to play Duke in the regional finals and lose on a last second shot by Christian Laettner — the most famous game in tournament history. Calipari publicly blamed himself for UMass’ loss and apologized to his players, an atypical mea culpa from a coach, which so impressed Joe Malone, he wrote the coach a note and a friendship blossomed.

That technical foul, and the friendship that ensued, led a man to send his sons to a basketball camp a thousand miles from home, a decision that would put young Sam on Calipari’s radar. But by the time Sam reached his senior year, Calipari had lost track of the player. Joe Malone says, “I happened to be having a conversation with coach on the phone, and he said, ‘So where’s Sammy off to next year?’ I told him it’s been three surgeries in four years. He’s got some offers to walk on, but no scholarship offers. Coach said, ‘Well, if he’s gonna do a walk-on, I’d love to have him at Kentucky. Tell him he’s welcome here.’”

And welcome he’s been. At the Southeastern Conference tournament in New Orleans earlier in March, Sam was walking down Bourbon Street with his family, when a phalanx of Kentucky fans started chanting his name. “It was crazy,” he says.  “They were chanting, 'Sam! Sam! Sam!' My younger brother couldn’t believe it.”

“People were snapping his picture as we waded through the crowd," recalls Joe Malone. "It was a magical moment, a beautiful display of affection.”

It’s impossible to know for sure how well he’ll run and jump after he completes rehab, but Sam remains confident he’ll get back on the court, and off the end of the bench. Even as Calipari will continue to surround him with NBA-level talent, Malone’s goal is to play meaningful minutes for Kentucky.

“I definitely think I can compete at this level,” he insists.

However far-fetched, it’s not surprising, considering what he’s already been through without giving up. And who can blame him for wanting a bigger role? It’s the desire to contribute, to be more a part of the thing he’s a part of, and less apart from it. Aren’t we all walk-ons in this way?