The sexual politics of "The Hunger Games"

The anticipated new movie and "Twilight" have one thing in common: It's women who have the power and passion 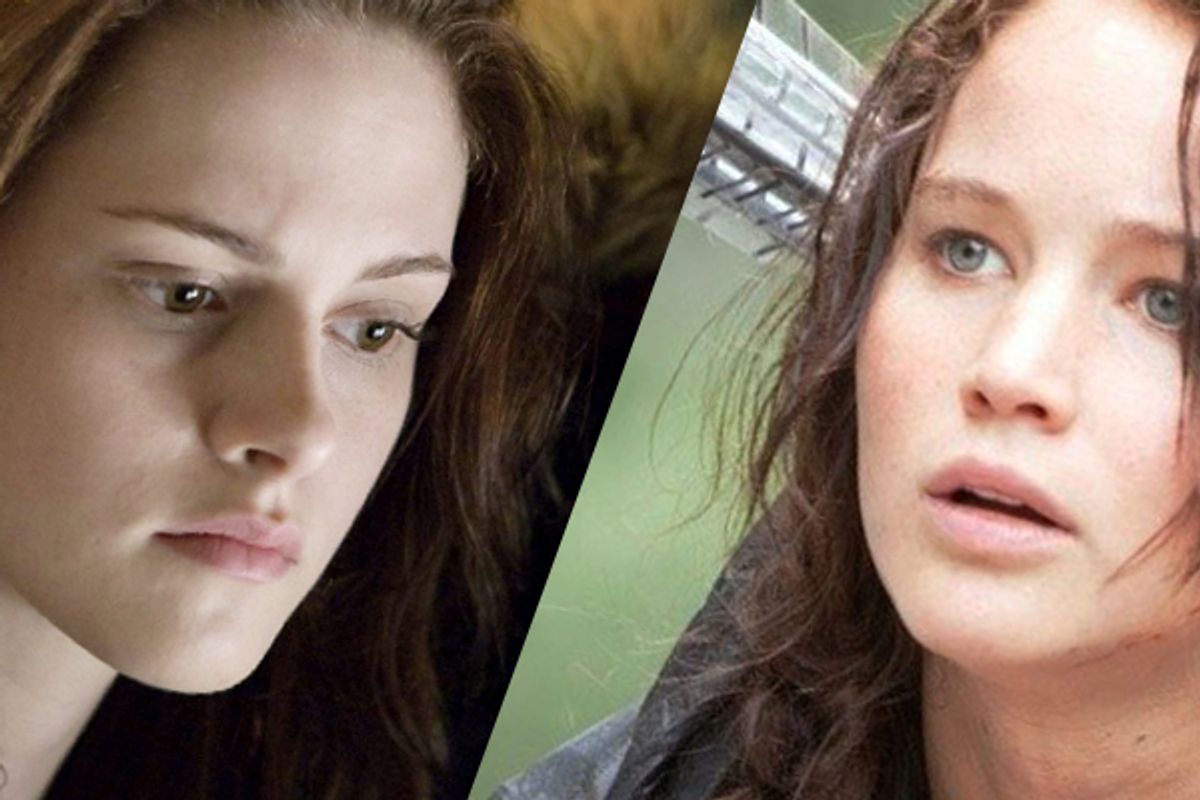 If there were ever a good time to be a young woman, this isn't it. As if a massive backlash against contraception and sexual freedom, a recession and a perverse diet culture weren't enough, it's almost impossible to get tickets for the new "Hunger Games" film.

As you certainly know by now, in "The Hunger Games," Katniss Everdeen is a teenage girl living in a dystopian far-future America where children from slave communities are forced to slaughter one another on television for the amusement of the wealthy. Katniss is moody, rebellious, deeply committed to protecting her mother and baby sister, and can incidentally shoot a man's eye out through his windpipe. Right now, millions of nice young ladies all over the world want to be her. This should probably worry Rick Santorum more than it seems to.

Obsessive female fandom is having a moment. First it was the "Twilight" books and tie-in vampire-chastity-fantasy films that still have women all over the world daydreaming about being brutalized by bloodsucking aristocrats. Now, just as the first film installment of "The Hunger Games" hits cinemas, "Fifty Shades of Grey," the X-rated fan-fiction novel based around the "Twilight" films, will soon be arriving in bookstores. They're popular not only because they flip the classic narrative on women, but because they take on three issues key to young women's lives -- sex, class and power.

Although these bestselling series share a great many readers, devotees of one particular series or another will invariably contest that they have nothing in common. True, if you had to objectively measure the fortunes of Katniss Everdeen and Bella Swan, "Twilight's" milquetoast heroine, there is little overlap.

Bella is a swooning prat of a girl who seems to exist solely to be rescued, married and impregnated at various intervals, a girl so wet she probably has to be wrung out before she can be popped into her wedding dress. She wouldn't last five minutes in the Hunger Games, unless she bored her opponents to death. Katniss, meanwhile, is a hard-ass hunter with a talent for butchery who becomes a revolutionary folk hero and spends most of the series trying to avoid getting married to either of the hunky young male leads who adore her. These are not young ladies you can imagine hanging out after school together, swapping stories about boys.

"Twilight" and "The Hunger Games" are similar only on the most fundamental of levels. They are written for teenage girls, by women who clearly remember what it was like to be one, from deeply involving first-person perspectives that invite the reader into the inner thoughts of the protagonist – a trick as simple and effective as a blade in the back. They are stories about desire, duty, social control and sexual repression, concepts today's teenage girls are almost definitively familiar with, and they are incidentally bristling with fanged monsters and bitter blood feuds.

These are dark, violent, emotionally exhausting books. Packed with more violent body horror and buckets of blood than parents who buy them for their 14-year-olds probably quite appreciate --  certainly grislier than any equivalent series I've encountered aimed at young men. "Twilight" contains a scene where Bella literally has to have a cannibalistic vampire baby bitten out of her womb, and by about halfway through "The Hunger Games," I was getting a little weary of the horrific torture sequences, the visceral fights to the death, the scaldings, stabbings and brutal police beatings, the enemies being gnawed to human jelly by genetically engineered nightmare-hounds, and just wanted to go away and read Cosmo Girl for a while. Actually, that's a lie -- I loved every second.

There are plenty of good reasons to make fun of all these these stories. In "The Hunger Games," giant mutant lizards ate my favorite character for no apparent reason. "Twilight," meanwhile, is a priggish, nipple-pinching morality fable of female subservience dressed up in plastic fangs and sparkle dust, with a stalky, broodingly abusive male lead who seems to have been written to make physical and emotional violence sexy again, in prose so godawful the author probably wouldn't know the most hackneyed, obvious metaphor if it jumped up and bit her in the neck. But here's one reason not to make fun: because they're for girls.

I didn't understand this fully until I saw the first "Twilight" film. When my friend and I stopped cackling at the hackneyed dialogue, I couldn't help noticing how the camera lingered on the computer-enhanced complexion of the male leads, and, indeed, of every male character, all of whom, one suspects, may have been cast as much for their physical propensity to make little straight girls' knees wobble as for any particular acting talent. They have chiseled feminine features, glossy eyes, floppy hair and full, wet lips that are perpetually parted in what could either be passion or hopeless bewilderment. The same principle seems to have inspired the casting of the lead boys in "The Hunger Games," who have spent the last few months being escorted through screaming crowds of young women by burly security guards during a "Twilight"-inspired promotional mall tour.

Both series have male fans, but they're not specifically catered to, in the way that James Bond films, Bruce Willis films or, indeed, 95 percent of the rest of the output of the film and fiction industries don't particularly concern themselves with the female gaze. In these series, it is women and girls who have desires, passions and problems, women and girls who act on those desires or are consumed by them, and men who are the objects of desire, even if they show up in the story addicted to the whiff of the heroine's funky-smelling blood.

In each story, our hero has to choose between two cookie-cutter male leads -- the wild, dark, poor childhood friend and the rich, upstanding, handsome stranger – although Katniss has to fit romantic intrigue around fighting a full-time revolutionary war. Versions of this love triangle are nothing new: it's Rose, Jack and Cal Hockley in "Titanic." It's Cathy, Heathcliff and Edmund in "Wuthering Heights." It's Jane, Mr. Rochester and St. John Rivers in "Jane Eyre." It's a choice that's only partly about the men involved, who really represent aspects of the heroine, the inner struggle between duty and desire, familiarity and adventure, between the different kinds of lives that girls want to lead. That these different lives somehow have to be embodied by different men is its own feminist bugbear, but the formula is still refreshing: However creepy and controlling Edward Cullen is as a character, he is still essentially a sex object.

Like the Bronte novels, "Twilight" and "The Hunger Games" are fairly oozing with repressed eroticism. One can no more write about extramarital sex in a book aimed at modern teenage girls than one could in a Victorian novel, but the implication drips from every page, which possibly explains the enormous volume of smutty fan-fiction on the Internet making the implicit explicit. "Fifty Shades of Grey," meanwhile, was originally written as "Twilight" fan-fiction, and part of the reason that it is less interesting as a social phenomenon is that its apparatus of censorship does not work in the same way that it does in the teen novels, where the frantic tension of suggestion and repression drives the plot, and readers are encouraged to fill in the gaps with their own feverish imaginings -- which they do, in graphic detail, on the Internet.

These stories are also fairly obviously about class. Vampire novels are straightforward tales of class treachery, all about wanting to offer yourself to wealthy social leeches who will, in return, grant you power, beauty, eternal life and pots of money; one somehow never reads about vampires who have to work for a living. "The Hunger Games," meanwhile, is an occasionally eye-watering narrative arc about economic inequality and social unrest, in which the hero finds herself fighting to survive between the cruel, cartoonish extravagance of an overbearing ultra-capitalist state and the murky machinations of the neo-Stalinist rebels. Sex, class and power: Three things that are on most little girls' minds far more than polite society likes to contemplate. No wonder these films have them screaming in the streets.

Female fandom can be frightening. If you've ever stood in the crowd during a public fan event, a premiere or a signing, you'll know what I mean: the screaming, the hyperventilating, the hollering of throngs of girls who have to be prevented from launching themselves at the poor young lads roped into portraying their fantasy figures in return for millions of dollars and semi-permanent house arrest. Whenever Robert Pattinson, the actor who plays Edward Cullen in the "Twilight" films, steps out in public, he has to be escorted by several large men in black to keep throngs of screaming teenage girls from literally tearing him to pieces. If I were Pattinson, typecasting would be the least of my worries.

Teen idols have inspired this sort of mania for generations -- long before the Beliebers were packing stadiums with shrieking crowds of underage fans, the Beatles were setting off real riots. This, however, is the first time that female-focused fiction has required the services of professional crowd-control agents. It's traditional to make fun of this particular species of mass hyperventilation, mainly because anything that gets so many women excited is automatically assumed to be beneath the consideration of real critics -- but there's power there, as well as passion, repressed sexual and social energy fighting for an outlet. Film and fiction agents have already noticed the importance of all that unspent energy. Given that "The Hunger Games" is likely to inspire a new schoolgirl craze for light-weapons training, perhaps it's time the rest of us did, too.