Are unmarried women the key to the election?

Unmarried female voters agree with Obama, but polls show he can't take their votes for granted 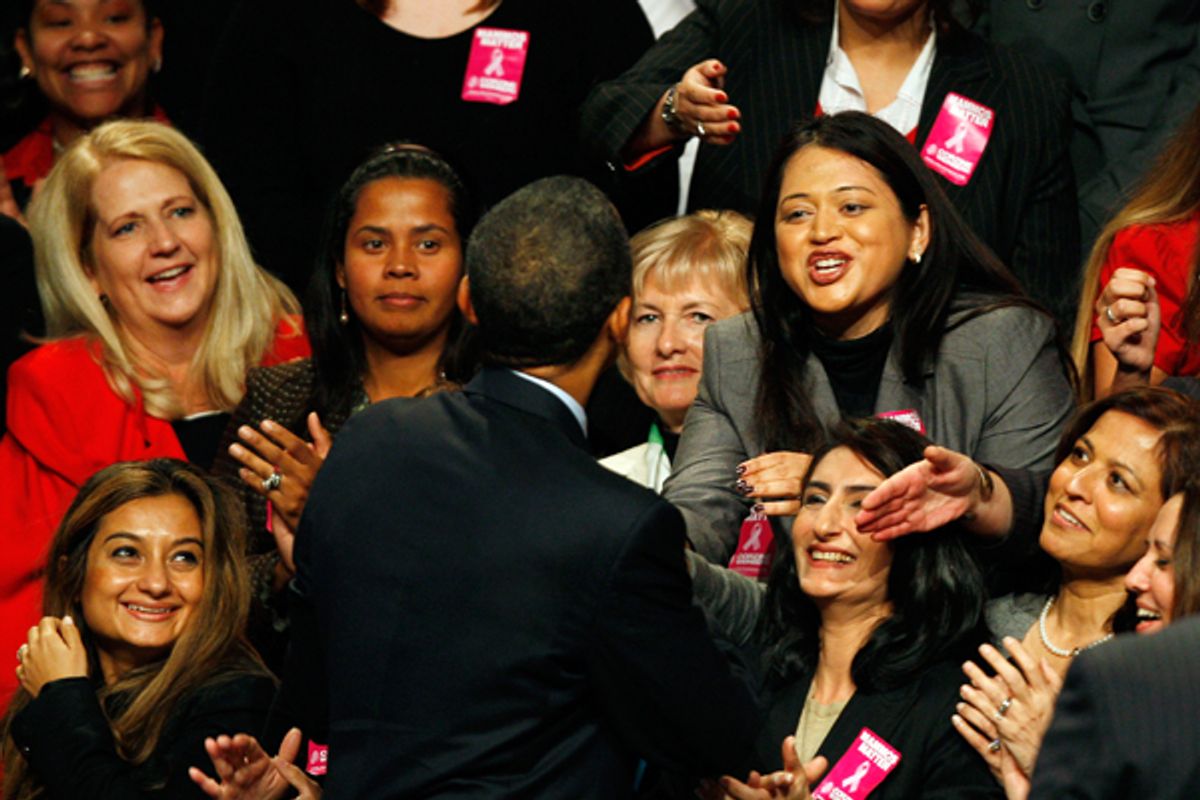 For all the recent hand-wringing over women voters, we still don't have much of a sense of how they intend to cast their ballots in November. Or maybe we just can't decide which group of women deserves our focus. Some polls show that Republican women support Rick Santorum more than ever, despite his interest in their uteruses. A Bloomberg survey suggests that women who voted for President Obama in 2008 are less likely to vote for him in 2012, even though a majority of women support the Democratic position on contraceptive coverage.

But one recent analysis suggests a subset of female voters poised to play a decisive role in the election: unmarried women. Given declining marriage rates, they're a larger demographic than ever. And according to the new report from pollster Celinda Lake and the Voter Participation Center, unwed women have indeed been listening to the recent conversation about reproductive rights, and they're not liking what the Republicans are saying. The problem for Democrats is that unmarried women are historically much less likely than their married counterparts to vote. President Obama's future in the White House may therefore depend on whether he can convince these women to head to the polls.

Lake and the VPC count 55 million unmarried women who will be eligible to vote in November, a 19 percent increase since 2000. They will be pivotal in swing states like Michigan, Nevada, New Mexico and North Carolina, but only if Democrats can motivate them. More than a third of these women aren’t currently registered to vote, as opposed to less than a quarter of married women. Unmarried mothers are the least likely of all to register and turn out among women. “It used to be that having children correlated with participation, but now it correlates with lack of participation,” Lake said in a call with reporters Thursday.

The question for Obama is whether these favorability ratings can be channeled into actual votes. As I’ve pointed out here before, Democrats are hoping to replicate a strategy that helped elect Colorado Sen. Michael Bennet, one he indirectly alluded to on the Senate floor during the debate over the Blunt Amendment. In 2010, voter participation for unmarried women dropped severely, helping bring in a wave of Republicans. But in Colorado it was different. In an election with a "personhood" amendment on the ballot and a Republican candidate who had sounded callously sexist while declining to prosecute a rape, Bennet emphasized the GOP’s extremeness on women’s issues, and won. Lake and Gardner point out that in that election, “married women basically split their vote … Unmarried women, however, strongly preferred Democrat Michael Bennet in a close election.”

What accounts for the difference between married and unmarried women’s preferences and participation? The report cites an October study by the Institute of Women’s Policy Research that found that unmarried women reported struggling economically more than their dual-income sisters; had the lowest earnings among women; and were much more likely than married women to be uninsured – which could mean they're more receptive to Obama's Affordable Care Act. Unmarried women “also tend to be progressive on social issues,” the report notes. The Democracy Corps poll found, for example, that unmarried women sided with Obama over Republicans on contraception, 61 to 29.

And the Washington Post's Sarah Kliff wrote in the Post in early February of the first round of the contraceptive insurance debate, "Young voters and women were key demographics for Obama in 2008. By hitting hard on a policy they strongly support, and moving the conversation away from abortion politics, the campaign may have found a new way to reach them."

The key is getting them to show up. "The participation of unmarried women cannot be assumed," says Gardner. "It has to be asked for." And Republicans may be asking for it. Gardner argues that this is about more than contraceptive coverage or abortion restrictions; it’s also about how single moms are talked about, including in the recently unearthed statements that Rick Santorum made in 1994 about single mothers “breeding criminals” and suggesting they be forced to take paternity tests before receiving welfare benefits.

"As this debate goes on and on," says Gardner, "you do see a change in support levels."

We're months away from the election, but Jess McIntosh, deputy communications director for EMILY's List, says, "Our membership is growing at a rate we’ve never seen before, and loads of the new folks are women who have never participated in the political process."

She adds, "In 2012 we have a record number of pro-choice, Democratic women running for Senate. And a president who’s been really out front when it comes to women’s health. That’s a pretty compelling alternative to these guys trying to shame, degrade and punish women for wanting to control their own lives."