If real life is a guide, this season's time period means big shifts are in store for Don, Joan and Peggy 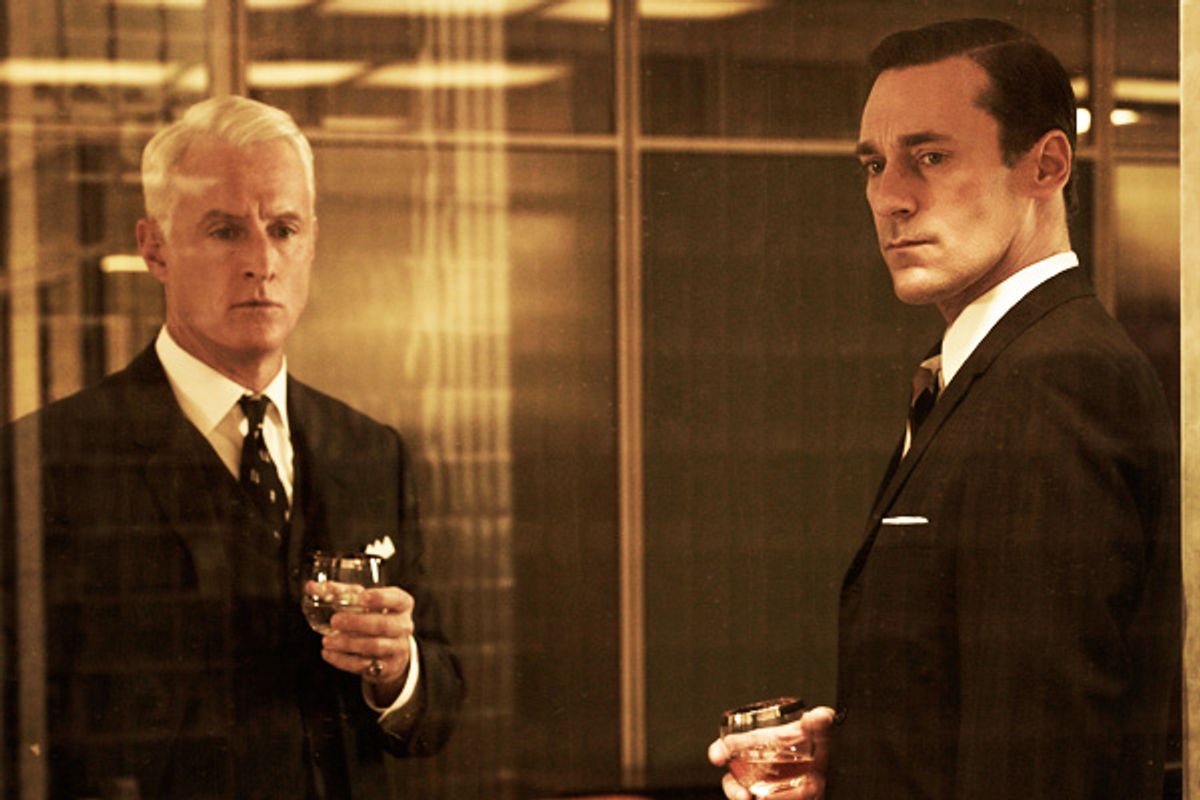 Starting this Sunday, Nelle Engoron will be recapping the fifth season of "Mad Men" every week on Salon.

In the last week, it's become increasingly clear that the long-delayed fifth season of “Mad Men” will open somewhere in 1966, a turning point year that saw protests against a war and for civil rights, the formation of both the Black Panther Party and the National Organization for Women, and the cultural bookends of the Doors’ first album and the Beatles’ last live concert, as the mop-tops made way for the hippies.

Creator Matthew Weiner has said in recent interviews that momentous historical changes are often “blips” to people busy with their own life dramas, yet the essence of “Mad Men” has always been its portrayal of the subtle ways that societal events affect even the most self-absorbed individuals. So where did we leave the show’s characters and what might be coming to pierce their Madison Avenue bubble?

At the end of last season, it was late 1965 and major life transitions were afoot: Don had become engaged to Megan, a young woman as fresh and “happy” as Betty was before she married him; a bitter Betty had settled for a Henry on Rye; Joan had been Rogered one last time but gave Greg the credit for the baby her mad moment produced; while Pete had stopped acting like an infant and become a father and partner. Peggy was still rejecting traditional womanhood, instead marrying sex and success by applying her sensual explorations to her creative work. As for that old dog Roger, well, he found out that what he doesn’t know could literally fill a book, and that no matter whom you marry, you still have to live with yourself -- a home truth that Betty has refused to face and that Don may be about to learn. Falling hard for Megan’s soft sell, Don had eagerly embraced this combination of Maria Von Trapp and That Girl, a fantasy suspiciously tailored to relieve his pain.

By the mid-1960s, the transition from romantic illusion to reality that Don and Megan seem destined for was also occurring in the country as a whole. The exciting promise offered by John F. Kennedy’s “New Frontier” presidency was crushed not by his horrifying assassination, which was literally just the opening shot in a decade of violence, but by the repeated wounds to the American psyche that followed.

The civil rights struggle (touched on in previous seasons) had forced white Americans to face not just their own racism but the more disturbing fact that their country was not the land of freedom and equality it claimed to be. Inner-city riots in 1965 and 1966 (including in Brooklyn, Harlem and the Bronx) made it hard to ignore the increasing rage of African-Americans over a lack of real progress and opportunity. This cracking of the national façade soon escalated to a seismic upheaval as beliefs, traditions and rules were challenged and overturned in a sweeping repudiation of the American dream.

As “Mad Men” has shown, the early part of the decade was still drenched in the cocktail cool of the 1950s, that pinnacle of affluent American smugness. From the youthful “viguh” of JFK to the British Invasion of wholesome lads, seeds of change were planted in those years, but hairspray and girdles as well as the old moral strictures still kept everything, and everyone, in place. By the mid-1960s of “Mad Men’s” last season, the gestating Age of Aquarius was in its third trimester, slouching toward America to be born.

In early 1966, John Lennon was nearly crucified for saying the Beatles were more popular than Jesus, thereby putting his finger on the as-yet-unnamed “generation gap” that was ushering in new gods. To the horror of parents nationwide, the counterculture was rising, with Acid Tests and “happenings” in San Francisco, “psychedelic” groups such as the Doors and Jefferson Airplane forming, and Timothy Leary promoting the use of LSD. London’s Carnaby Street set the tone for personal expression with its great fashion mashup of unabashed sexuality and romantic excess from every historical era, and Mary Quant thrilled men by popularizing the miniskirt – a style statement we may see Peggy rock this season, along with some boots made for walking (all over those sexist co-workers). But it will be up to Sally to appear in an outfit that makes Betty declare “no daughter of mine will be seen in public dressed like that” (as all girls heard in those years).

While provoking countless fights between parents and children, shorter skirts and longer hair (on both genders) were only the most visible signs of the (not just sexual) revolution. It’ll be amusing to see if Don finally washes the Brylcreem out of his hair and whether Pete appears in a Nehru jacket, but the real question is who will adopt the new fashions of the mind.

While it’s hard to imagine any of the characters dropping acid (at least until Sally makes it to Woodstock), Peggy’s mind has already been opened by the underground arts scene and “radical” viewpoints of her boyfriend Abe and pal Joyce. Although Pete once seemed on the verge of being hip (touting Elvis and cross-racial advertising), last season found him on a more traditional path, leaving Peggy to seize the day. As she deftly grasped the shift from necessity to desire in the American consumer, Peggy’s seeming deficits of youth and gender have been transformed into powerful assets for changing times. Expect those changes to accelerate this season, leaving the older characters bewildered, angry and scrambling to adapt.

Opportunities for smart, creative women have opened up just in time for Peggy, but the older Joan hasn’t been so lucky, and is about to become a working mother when that term was an oxymoron for middle-class women. Joan has claimed she doesn’t want Peggy’s career, but after last season’s degradations, in which the men made her office a thoroughfare and her body a laughingstock, Joan may decide to discard the old “women’s wiles” in favor of the straightforward style that Peggy employs. Perhaps this will be the season Joan finally abandons the “feminine mystique” and claims the professional respect she deserves. If so, she’ll no doubt face the same shocked male resistance that all women did when rejecting a role they’d been confined to for millennia. Some heavy-handed plot about the emerging “women’s liberation” movement is unlikely (despite its New York roots), but its victories helped all women, even those who abjured feminism, as in 1965, when the Supreme Court overturned a law in Connecticut (where many of the real “mad men” lived) and ruled that states couldn’t prohibit contraception.

Last season Joan raised another dominant issue of the next several years, taunting her harassing co-workers about dying in Vietnam without knowing how many young men will soon meet that fate. She’s matched by her clueless husband, Greg, who sees Vietnam as an easy escape from his mangled medical career, believing the war will be over quickly once the Yanks are over there. Both are about to have their complacency shattered by a war that destroyed America’s self-image as the victorious good guy.

For in the midst of this mass liberation of minds, hearts and bodies came the bad acid trip of Vietnam, a nightmare no one could escape. 1966 brought the first large ground operations of the war, but Americans were shocked by the Viet Cong’s ability to elude the seemingly superior American military. In response, LBJ kept escalating the war, more and more young men were lost to the draft, and images of the war played constantly on TV, with the crack of gunfire and the whir of Hueys a nightly soundtrack in American living rooms. Rising in parallel and equally noisy was the antiwar movement, which galvanized a generation to question not just the war, but everything that their parents had ever told them.

How will the “Mad Men” characters react to an issue that divided American society more deeply than at any time since the Civil War? It’s an easy bet that veteran Roger, who taunted Japanese clients last season, will be the hawk lobbing insults at protesters and the counterculture. More conventional than he sometimes appears, Don might join him, or he might remember his squeamishness in Korea. Alas, unlike taking a stand against tobacco (as Don did last season), there’s no money to be made from the antiwar side. Defense contractors may instead tempt an impoverished agency and provoke office debate over accepting “death-mongers” and “child killers” as clients.

However, the real battles in 1960s America were fought in the family home, where the term “generation gap” understates the conflict just as “collateral damage” minimizes killing in war. All over the country, arguments erupted daily not just about the war, but all the social and cultural changes that the younger generation embraced and the older one feared. So severe was this schism that a shocking number of parents disowned their children -- and vice versa.

We think of Don as a cool, non-judgmental guy, one who walked on the boho side with Midge, but he’s shown limits to his tolerance (especially when it threatens his self-interest) as well as a sneaking conventionality (as evidenced by his speedy wife replacement). Who knows what he made of Midge’s progression from easygoing reefer-smoker to desperate junkie, a development that seems ripped from the hysterical anti-drug propaganda of the time, which promised exactly that fate for anyone who dared light up.

Despite feeling entitled to do whatever he wants, from being an alcoholic serial adulterer to appropriating a dead man’s identity, Don seems certain to recoil from his children’s experimentation or rebellion, thereby committing the hypocrisy that made Sally and Bobby’s generation reject their parents. And while it’s fun to imagine Betty in an early feminist consciousness-raising group that cracks her brittle shell and releases whatever she’s hiding inside, her treatment of Sally and increasing resemblance to good Republican wife Pat Nixon aren’t encouraging.

Finally, will the world of “Mad Men” remain as white as Roger’s hair or will we begin to see African-Americans in other than subservient roles? Even more liberal places like New York took time to truly integrate, but the pressure to do so will be increasing, and if he’s smart, Pete will revive his profitable idea to explicitly advertise products to black consumers. (Cue a painfully hilarious attempt to understand that market, unless they get some inside information.)

The volatile struggles between the races, genders and generations promise great drama in the coming season and give new meaning to the show’s title, suggesting the anger that divided Americans as well as the madness that many felt overtook their country in those years. Both states can be good now and then, if that’s what it takes to change. And change is what those mad times were all about.