He hatched Etch a Sketch Mitt Romney and Multiple Choice Mitt. How Matt Ortega uses "microsites" to take on the GOP 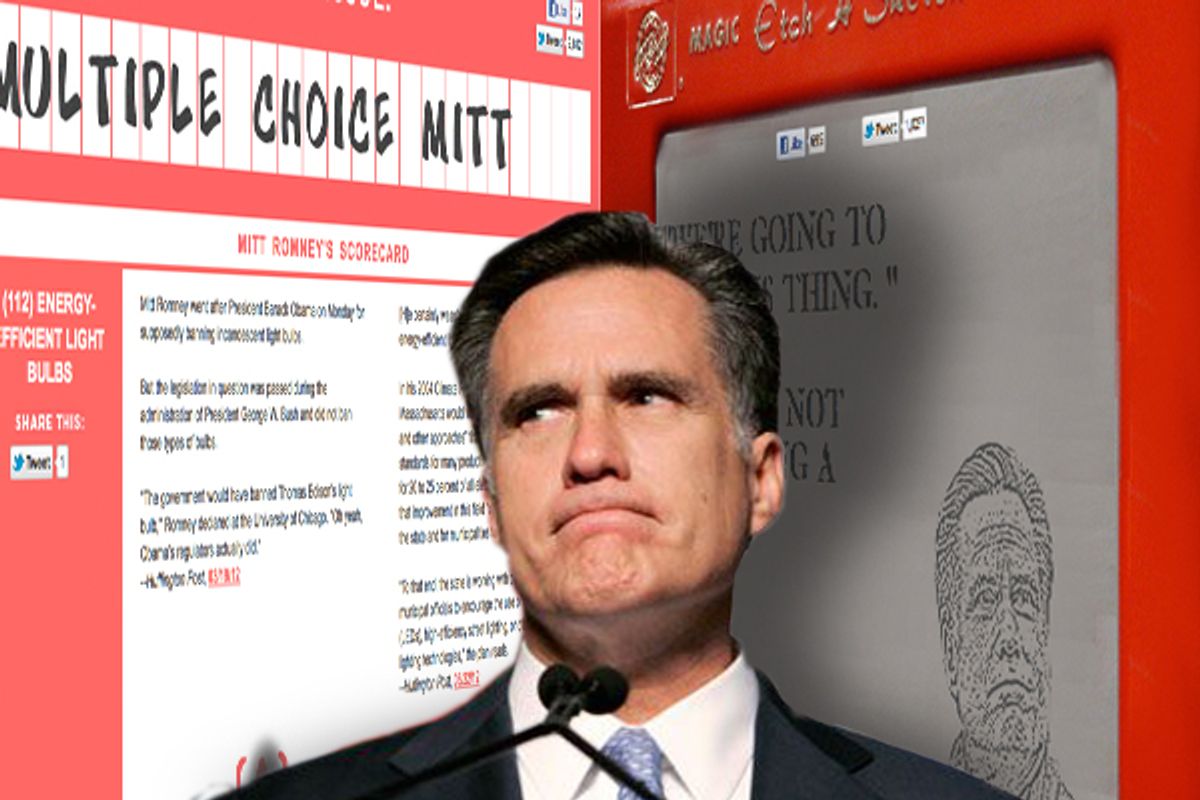 What began as an unintentionally revealing analogy at 8:09 a.m. Wednesday needed just six hours to become a full-blown meme. It started with Eric Fehrnstrom on CNN, deadly serious as he explained that his boss Mitt Romney’s campaign was like an Etch A Sketch that could be shaken and reset for the general election. Within hours there were spoof videos, pictures and several competing Twitter hashtags trending worldwide. By 2:14 p.m., the Etch A Sketch had reached what is perhaps the apotheosis of Internet meme-dom: a microsite, EtchASketchMittRomney.com. The site displays two contradictory Romney quotes every time you “shake” it.

“Inevitable,” several prominent journalists tweeted when the site appeared, already steeped in Etch A Sketch riffs for several hours. And while it does feel like these gags arise organically out of the social media ecosystem, they’re not exactly inevitable. Somebody has to make them.

In the case of EtchASketchMittRomney.com that somebody was Matt Ortega, a liberal consultant and activist. In fact, if you’ve seen other viral microsites this campaign season, there’s a decent chance you were admiring his handiwork. Ortega owns some 40 domain names, though not all are fully developed sites. There is LetHimDie.com, inspired by a much-discussed incident in an early GOP debate where an audience member yelled the phrase about an uninsured sick person. There’s also ExcitingThingsAboutTimPawlenty.com, which simply displays a mock word processor with a “1.” and a blinking cursor anxiously awaiting input that never comes.

Then there’s the popular MultipleChoiceMitt.com, which displays Romney flip-flops in the style of a standardized test; NotAnotherTexasGovernor.com, comparing Rick Perry to George W. Bush; and ObamasAmbassador.com, lampooning Jon Huntsman. Aborted sites include NewtBlingrich.com, a play on the former speaker’s line of credit at Tiffany, and a Herman Cain site called PizzaPuns.com. He never made one for Michele Bachmann because it was impossible to pick the most memorable of the myriad outlandish things she said.

The sites, often put up within hours of the event that inspired them, give developing memes a more permanent home on the Web. And while not all Ortega’s projects are successful, EtchASketchMittRomney.com was a hit. It got over 1,000 tweets and instantly became part of the news cycle, mentioned by dozens of major outlets, from the New York Times and Los Angeles Times, to the “NBC Nightly News” and the "Today" show.

Ortega works for the Democratic consulting group New Partners, which is stacked with former DNC staffers, and Ortega himself worked for the national committee during the 2008 campaign. But the 27-year-old insists the microsites are not part of his professional work, but a hobby that he does entirely on his own. “Any stuff that I’ve done is not connected to a campaign or the DNC or anybody,” he says. Still, they’re happy to have him. “Matt Ortega is a talented guy -- glad he's on our side. We'd have hell to pay if he wasn't,” DNC communications director Brad Woodhouse said in an email.

While some people go to bars or watch TV after leaving the office, “I come home from work ... and I build websites,“ the self-taught “digital nerd” said. “This is something I’ve been doing since I was 12 years old,” Ortega explained. “I used to write short stories and draw as a kid. So building a website is sort of an extension of that.” He pays for everything out of pocket -- about $7-$10 a pop for domain name registration, plus $150 a year for data hosting. It can take as little as 45 minutes from gaffe to Twitter gold, or a lot longer depending on the complexity. “I don’t know of anybody on either side [Democratic or Republican] that does anything consistently like this,” he boasted, though he did mention a few people who have made one-offs.

Ortega’s sites weren’t always political, and neither was he. Despite being a professional liberal, he registered as a Republican when he turned 18, a product of his “Glenn Beck Republican” dad. He had a change of heart during the second Bush term, and a reader of his blog paid for him to attend the inaugural “YearlyKos” in 2006 (predecessor to NetrootsNation, the giant annual liberal convention). He’s been at it ever since.

Still, it’s unclear what political impact work like Ortega’s actually has. “None of the sites I’ve ever done have I felt like, we’re going to change the conversation, or lengthen the conversation, or start a new meme.” Mostly, it’s for the lulz -- for the laughs, in Internet parlance. “Even if it’s just making my friends laugh,” it’s worth the $7, he said.

That hasn’t stopped some political pundits from attacking it. The media feeding frenzy over the Etch A Sketch moment sparked polemics about the changing nature of the political debate, with some journalists like NBC White House correspondent Chuck Todd decrying the rise of “tid bit journalism.” “It’s all about the little bits that make their way onto YouTube ... and it goes viral and it’s the moment,” he lamented, saying the phenomenon can crowd out more important stories. Ortega takes advantage of this new dynamic, which prizes quick, visceral and irreverent content, though the best is also still politically salient. While just a few years ago the model was partisan, sensationalized and indignant, in the vein of the Huffington Post, the new model, perhaps best characterized by BuzzFeed, seems partisan-agnostic -- sheer wackiness makes content universally appealing. Fehrnstrom’s Etch A Sketch hit all the right buttons, almost tailor-made for Internet mocking.

Still, it won’t be around forever. Even the best memes don’t last long, and Ortega said it makes him “a little sad” when his old sites go to Internet heaven. But that’s how it goes when, like an Etch A Sketch, the news cycle can change completely with just a few shake-ups.