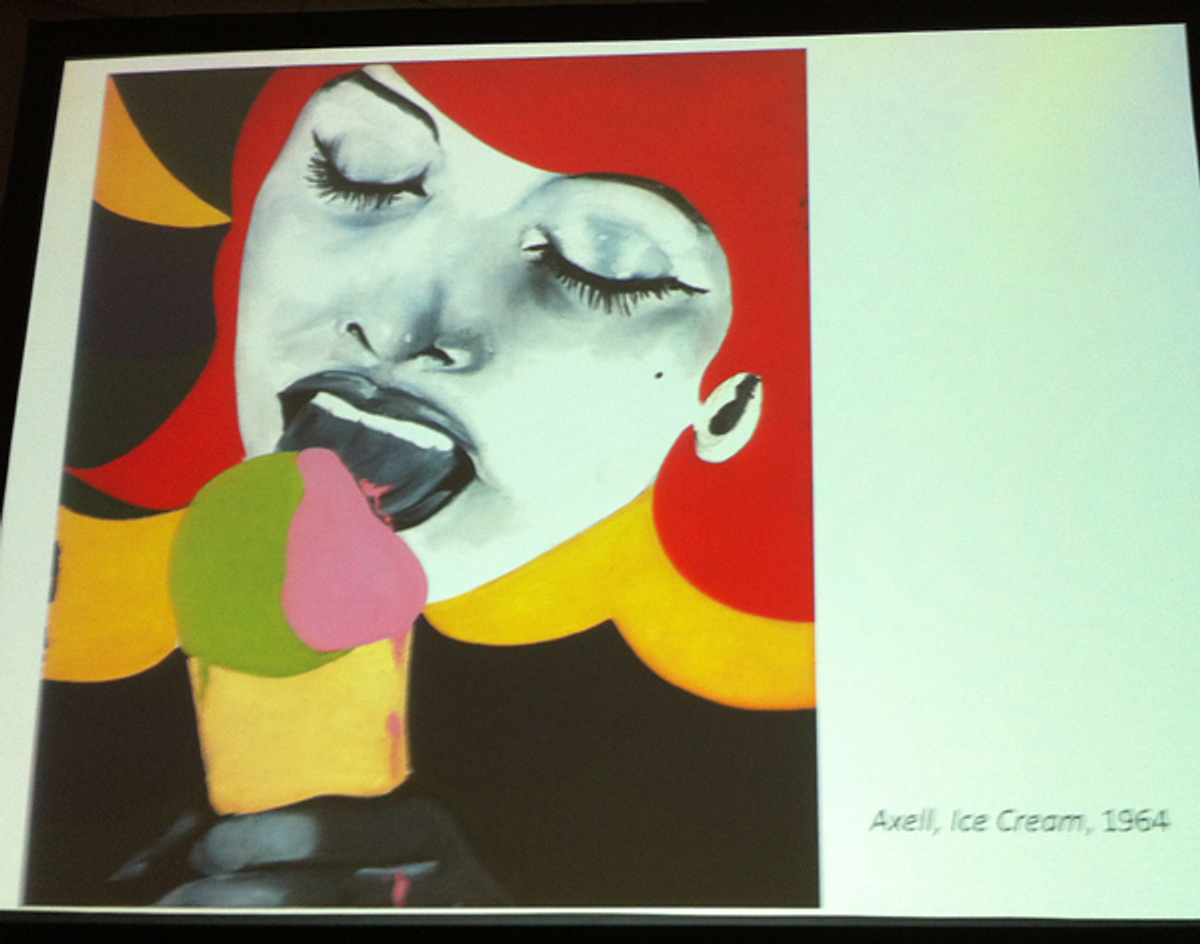 In 1963, Betty Friedan's "The Feminine Mystique" drew attention to the stifling state of American womanhood, and Roy Lichtenstein painted what might be considered a visual analogue: "Drowning Girl," who'd rather be engulfed by tidal waves than call Brad for help. It was also the year Andy Warhol began his grungy, frightening Race Riot silkscreens, as civil rights protests grew. And James Rosenquist was working his way up to "F-111," his big, bold antiwar statement of 1965, as Vietnam came into public focus. And a good many other pop artists around the globe were also picturing social concerns and changes on the horizon.

Last month, the College Art Association held its 100th annual conference in Los Angeles, with "Pop and Politics" among the program highlights. Each of the eight speakers revisited that art movement of a half-century ago, and provided unique new perspectives on the theme.

The sessions were organized by Allison Unruh and Kalliopi Minioudaki, both Ph.D.s and independent art historians. Here's the first half of my two-part interview with them. And here's a link to my first CAA100 column, which includes my talk with Anthony E. Grudin, "Pop and Politics" presenter and Warhol specialist.

[caption id="attachment_281701" align="aligncenter" width="460" caption="Kalliopi Minioudaki and Allison Unruh in front of an Andy Warhol piece at the L.A. County Museum of Art."]

Michael Dooley: What inspired you to put together "Pop and Politics"?

Allison Unruh: Kalliopi and I have been friends for years, and we’ve been looking for opportunities to collaborate. Chairing a panel at CAA was a perfect chance for us to promote discussion in a way that was relevant to both our interest in broadening the critical discourse of pop art, and to support a variety of scholars’ work that we think is really important.

Kalliopi Minioudaki: As we put it in our abstract, our main goal was to “promote discussion about previously overlooked intersections of pop and politics in its varied international contexts, and to forge new ways of thinking about the political in the context of pop.” There have been, of course, productive denouncements of pop’s superficiality in light of significant previous investigations of some of pop’s meaningful social and political dimensions, and there seems to be a recent consensus about the criticality of pop’s often ambiguous – simultaneously celebratory and critical – embrace of pop culture. But we agreed that there remains a need to further investigate the various political aspects of pop in greater depth.

AU: We’ve collaborated on another recent project; when I had the chance to edit a book of collected essays on Robert Indiana’s work I immediately thought of Kalliopi’s previous exploration of the political significance of the work of a variety of women pop artists. And so I invited her to investigate those kinds of issues in Indiana’s work, which she did in a really incisive and original way.

KM: In a way, the topic of our panel grew naturally out of each of our scholarly works on mainstream and marginal pop, which seemed to converge in our interest in its political dimensions. For instance, I have analyzed the diversity of proto-feminist politics in the realm of pop in light of several women pop artists whose work I studied for my doctoral dissertation, what I described as “pop proto-feminisms” in the catalog of "Seductive Subversion: Women Pop Artists 1958-1968." And so I was, needless to say, particularly curious for new scholarship on the gender and sexual politics of pop.

What aspects of the politics of pop have been previously overlooked or neglected, and why?

AU: First, I would say that there isn’t a single kind of political dimension to pop – rather, there’s a range of levels and types of engagement with the political that is really interesting in its variety. In turning to the immediacy of popular culture and contemporary experience, artists who worked within the realm of pop art found themselves invariably grappling with the political, whether in explicit or implicit ways.

One of the main problems with the politics of pop has been the way it walks a fine line between celebration or complicity versus a critical stance toward mass culture. In my view, the work of an artist such as Robert Indiana – often called the most “American” of pop artists – can in fact be both celebratory and critical of American culture.

KM: Moreover, to answer “why” pop’s political aspects have been overlooked, it’s important to clarify which or whose pop art we are talking about, and which stage of its critical construction we are taking into consideration.

On the one hand, for instance, there are specific pop art movements that have been always and unavoidably acknowledged as quite dissident, such as Equipo Crónica, which was critical of Franco’s regime. But isn’t this one of the reasons why it’s been marginalized from the discourse of pop as something other than pop?

If, on the other hand, we focus on the history of the critical construction of American pop, then the shifts in its discourse reveal a variety of political aspects whose neglect and rediscovery can be more easily identified and perhaps historically and discursively explained.

What about the feminist politics of pop?

KM: The neglect of the feminist politics of pop is a different story, of course. It’s a symptom of the writing out of women artists from pop’s history, ensuing from the sexism of the 1960s art world and the masculinist principles of art history. But it’s also a surprising effect of the rise of feminist thinking in the arts.

A feminist aversion to pop art was justifiably developed by the feminist critique of the misogyny of pop art, pop culture and their pornographic iconography’s servicing of patriarchic culture in the 1970s. But feminist thinking on pop art and culture left no viable subversive position for women artists vis-à-vis popular culture other than that of abstinence or critique, which made feminist pop an oxymoron.

If I may, I’d like to speak about my experience of the reception of "Seductive Subversion," even of the paper I delivered at CAA. What’s perhaps most difficult still to accept, given the recent acknowledgment of feminist interventions in pop, is the – often sexual – politics of affirmative, pleasurable dialogues with pop culture derived from what I see as a strategic use of pop culture, from an active rather than passive fan’s position, for instance.

On Sunday, Allison and Kalliopi discuss what pop has to do with today's politics.