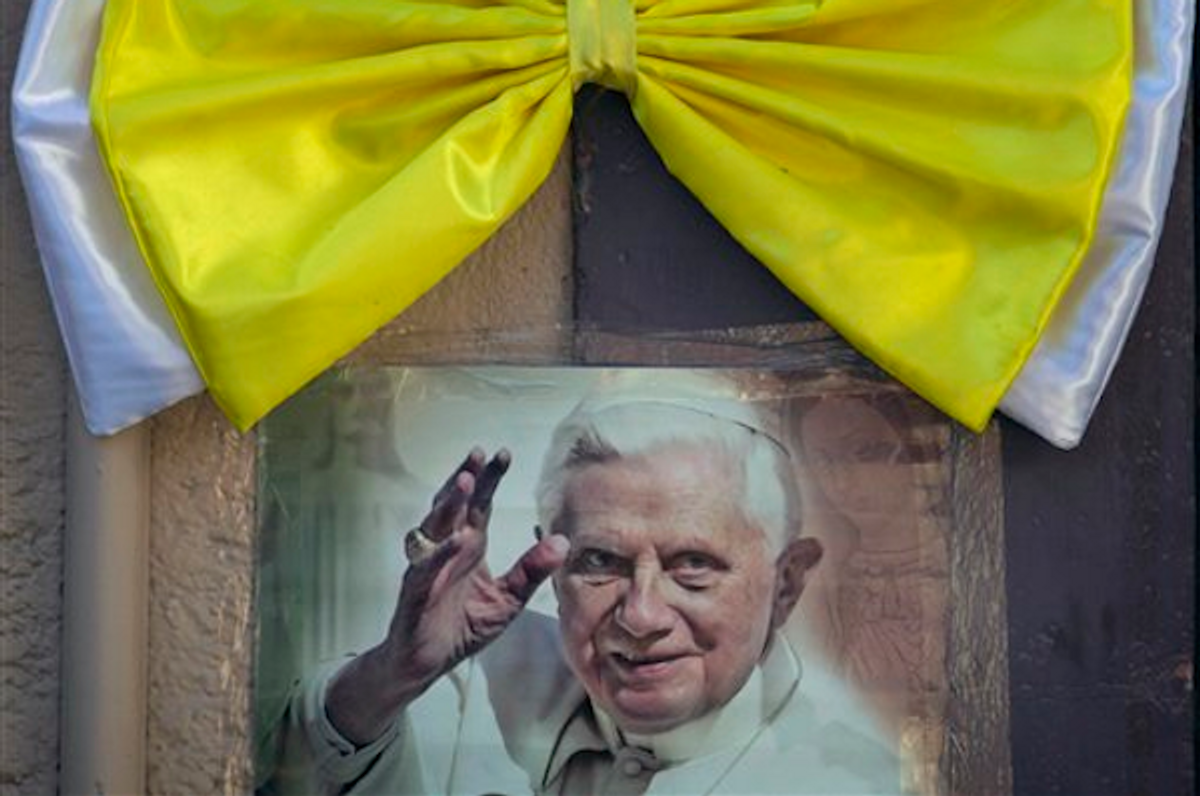 An image of Pope Benedict XVI is taped to a wall, topped with a Vatican-colored bow, in Leon, Mexico, Thursday March 22, 2012 (AP Photo/Eduardo Verdugo)
--

LEON, GUANAJUATO, Mexico — The arrival of Pope Benedict XVI here is being celebrated by many, but not by all.

Guanajuato is one of Mexico’s most religious, conservative states, and the birthplace of President Felipe Calderon’s center-right National Action Party. The pope’s decision to visit this town — and bypass Mexico City — sends a message to the country’s more liberal capital.

Few issues bring the contrast into focus as sharply as abortion. Mexico City legalized abortion; Guanajuato cracks down hard on any signs of it.

Maria Lopez (not her real name) got pregnant in Leon in 2008 when she was 19, and she couldn't afford to bring up a child at that time. She took the drug misoprostol, used for chemically induced abortions in many Western countries, to provoke a miscarriage. She ended up in an emergency room with severe abdominal pains.

"A doctor arrived to examine me, and she opened my legs almost in anger, saying 'let's see what you've done,'" says Lopez, now 22.

The doctors and nurses at the hospital reported her to the authorities. She was arrested and imprisoned. She was later released on bail and served a nine-month sentence under house arrest.

Between 2000 and 2010, 168 women have been jailed for having abortions or miscarriages in the state of Guanajuato. Some of them were incarcerated on homicide charges. Currently some 30 women are under investigation here for aborting their pregnancies or miscarrying, sometimes through natural causes, according to non-profits.

Nearly one in five pregnancies end in spontaneous miscarriages.

“We believe that it’s the hierarchy of the Catholic Church that represents the biggest obstacle to access to safe abortion for Mexican women,” says Maria Consuela. She is the director of a non-profit organization called “Catholics for the Right to Decide,” which campaigns for women’s sexual and reproductive rights.

In 2007, Mexico City legalized abortion in the first trimester of pregnancy, angering the Catholic Church. In response, and with encouragement from the church, 16 Mexican states adjusted their constitutions to protect the fetuses, beginning at the moment of conception and turning abortion — technically — into murder.

Abortion is permitted across Mexico in extreme circumstances such as when a woman has been raped, the fetus shows signs of serious deformities, or the pregnancy puts a women’s life at risk. But those monitoring such cases say authorities often fail to fulfill their obligation.

Women in conservative states like Guanajuato who visit hospitals or clinics with pregnancy complications often face suspicion — whether they’ve had an abortion or not.

“In Leon, they start to question you, accusing you of provoking the situation, and they try to investigate you to see if you did,” says Eugenia Lopez, director of the feminist sexual rights non-profit Balance.

Mexico is estimated to have the world’s second largest Catholic population after Brazil, but Catholic Mass attendance is shrinking.

The issue of abortion has divided Mexico. Most approve only of abortion in certain circumstances such as after rape, according to a survey by Catholics for the Right to Decide.

Yet those women who can afford it travel to the capital from other parts of the country to end their unwanted pregnancies legally and safely.

Veronica Cruz, founder of the Guanajuato-based women's rights group Las Libres (the Free), says that women with money can get abortions secretly in private hospitals in most Mexican states. It is poor, young women who are being criminalized, she says.

"Poor women have to go to cheaper, backstreet clandestine services that aren't hygienic where they risk their health and their lives,” says Cruz. “And these women are at risk of losing both their lives and their liberty because they are then denounced by medical staff when they seek medical help following complications."

Mexican law separates the church and state, and priests are supposed to be barred from preaching politics from the pulpit.

But with a general election looming in July, Mexico's Roman Catholic Church issued guidelines on how Mexicans should vote, emphasizing they place prime importance on "the right to life, starting at conception."

As long as abortion remains illegal and taboo in some Mexican towns, women like Maria Lopez will continue to be criminalized.

"The priests say that you should have all of the children that God sends you,” she says, “and I say OK well if God sends me 20 children should I have them even though I can't feed them?”