My son, the straight boy

Tommy has two moms and one gay biological dad. But at the age of 4, he had an announcement: He wasn't like us 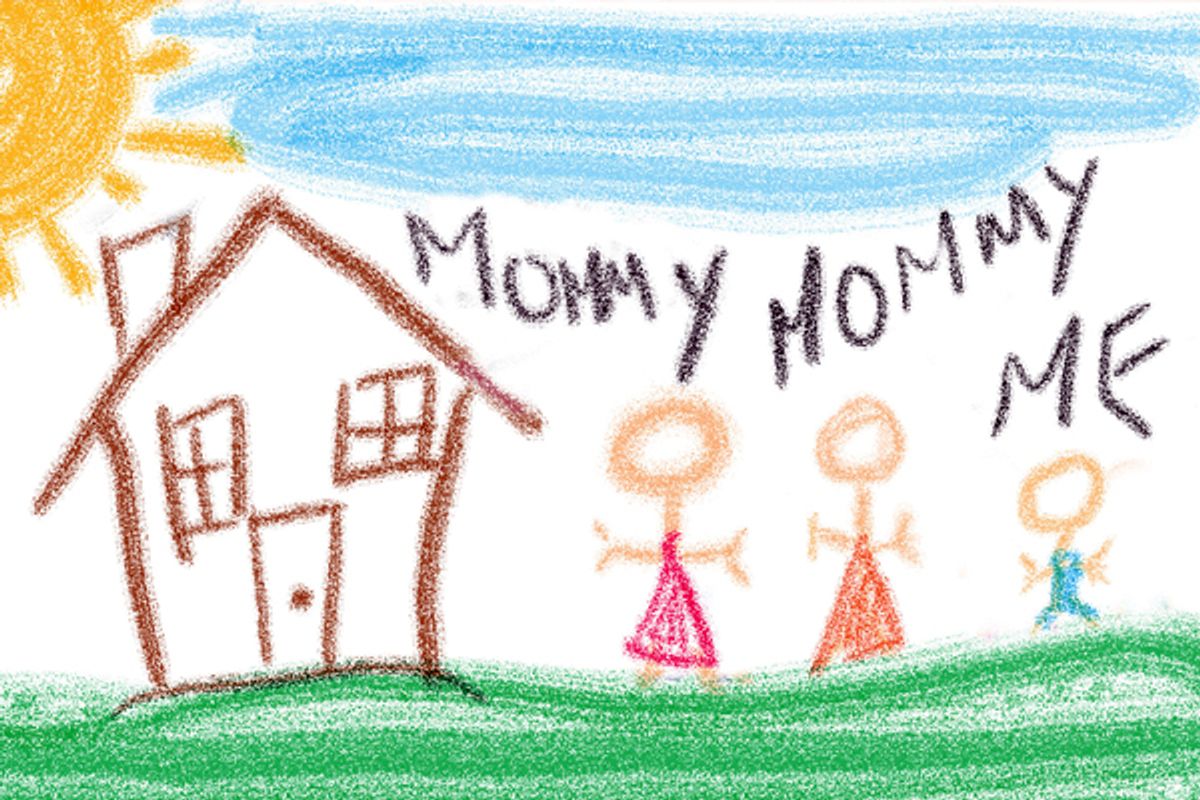 A week after my partner, Abbie, and I were married at Brooklyn’s City Hall, our 4-year-old son Tommy came out to me. Tommy had been excited about our wedding. He’d picked out his own tie and asked me to wear my hair like Princess Ariel in “The Little Mermaid.” But he had questions, too. “You already had a wedding,” he said — and he was right.

Three years before he was born, Abbie and I were married by an Episcopalian priest at the New York Botanical Garden. Over 200 guests attended, and the ceremony took place in an enclosed garden on a warm night in July. It was one of the first same-sex weddings featured in a national bridal publication (Modern Bride 2004), and there is a picture of us from that day — two blond women in gowns — on Tommy’s bedside table.

The day Tommy came out to me, we were walking home from school. He was telling me about Taylor, his most recent crush, when he stopped in the middle of the story, looked up and said, “Mama, you know how you and Mommy are gay?”

I nodded and figured he was going to ask more questions about why we had to get married for the second time.

I was surprised by the declaration — we never thought Tommy was gay — but immediately replied, “That’s OK.”

“I knew you’d say that,” he said. “I just thought it was something I should tell you.”

We were walking by our local park, and the sidewalk was crowded with kids scooting alongside their parents. I was self-conscious about whether they heard our conversation. I imagined the other parents, straight parents, suspecting me, accusing me, as if it was my fault that Tommy felt he needed to come out to me, as if I had forced my “otherness” onto him.

“Were you scared when you knew you were gay?” Tommy asked.

“Why were you scared?”

“I was afraid people wouldn’t like me because I was different.” I turned to Tommy to see if my answer upset him and added, “But that didn’t happen.”

People have asked if I was at all disappointed to hear Tommy describe himself as straight. It’s a fair question. As parents, we want our kids to reflect who we are in the world. Others have asked if I was relieved. This question is problematic and assumptive, but the truth is that I was no more relieved than I was disappointed.

We’d introduced the word “gay” to Tommy early on, in part to give him the language to describe his family, but also because we knew that eventually he’d hear the term in a negative context. Abbie relied on Tommy’s love of Disney movies for an explanation: To be gay means that you are a princess who loves another princess or a prince who loves another prince. Though we were the ones to teach Tommy the word, it still impressed me to hear him use it to explain his own identity. There was nothing political or forced in his use of the word; it was a simple declaration. You are gay. I am not.

Tommy’s dad, Tim, is our close friend. Our original plan was that he would be our donor, and simply a male figure in Tommy’s life on par with our other dear friends. But his role in our family evolved shortly after Tommy’s birth, and to all of us he is unquestionably Tommy’s dad, not just his biological father. Though Tommy did not mention Tim during this conversation, he knows that his dad is also gay. Tim is single and when we talk about finding him a partner, Tommy understands that we are looking for another “prince.”

Tommy’s always been open about his crushes on both princesses and real little girls, and yet we’ve still had people ask us if we worry about whether his sexuality will be affected by his upbringing. In fact, this happened from the beginning of the process, in places we least expected it. When Abbie, Tim and I first began the donation procedures, the fertility clinic required that we receive approval from a state-appointed psychologist. At the meeting, the doctor asked us basic questions about how we planned on structuring our family emotionally and legally. She assured us that she “approved” of our right to have a family. We answered her questions and smiled politely, but at the end of the session she turned serious and said there was one more issue she needed to bring up.

“There are no conclusive tests,” she began, “but some studies show that children who have two gay biological parents might have a higher chance of being gay themselves.”

The three of us stayed quiet, stunned.

“Is that OK?” the doctor asked.

After a few seconds, I broke the awkward silence. “Forget it,” I said, turning to Tim. “We can’t use you as the donor now.”

“I’m just kidding,” I finally assured her. “We think being gay is fine, so we’re OK if that happens.”

A few weeks before our wedding at City Hall, Abbie and I tried to explain to Tommy in simple terms why we planned to get married again. We waited until after his bath, when he is at his calmest, and sat him at the table with a bowl of vanilla ice cream. We told him that all of the people in the state voted, and finally enough of them thought we should be allowed to get married. I watched him struggle to understand as he picked at his dessert, though it wasn’t exactly foreign to him to think that other people did not approve of or understand his family.

Kids have laughed at Tommy when they learn about his two moms. Kids are kids, sure, but he’s also witnessed strangers ask Abbie and me the question, “Who’s the mother?” and he’s seen them grow silent and uncomfortable when we answer, “We both are.” He knows that when we go to the gay pride parade in the summer we are celebrating a part of ourselves that not everyone deems worthy of celebration.

In many ways, Tommy is growing up in a family very similar to the one I grew up with. He lives with two parents who have a loving relationship. He is surrounded by a large, extended family that gets together most Sundays for dinner. Of course, there are also plenty of differences. I grew up in a harbor town on the Long Island shore where I spent summers riding my horse through the semi-deserted ruins of abandoned estates on the Muttontown Preserve. Tommy recognizes that a windy subway station means the train is on its way, and by the time he was 3 years old he could walk well over a mile. But the biggest difference, of course, is that two women, his mothers, are raising him. His dad lives in a studio apartment in Chelsea. Often they spend their time together, which we call “Dadurdays,” eating cupcakes from Billy’s Bakery and taking pictures at Chelsea Piers.

I didn’t realize that I was gay when I was Tommy’s age, but by fifth grade I understood that something about me was different. I was obsessed with the movie “Dirty Dancing,” and I knew enough to pretend to love Patrick Swayze rather than Jennifer Grey. While my best friend fantasized about the bad boy who makes good, I stayed quiet. The hiding came easily for me, but not without the consequences that affect most gay kids, primarily shame.

For Tommy, it is not he who is the “other,” it’s his family. Unlike many of my well-intending straight friends and family members, I don’t try to delude Tommy into thinking his family isn’t different. It is. I would also never tell him that being different doesn’t matter. It does. And he knows that. There are a lot of wonderful things about it, of course — most of all, he gets three parents and three families who love him dearly. But being different can also be a burden. I know that as much as any other gay person. Tommy already knows that as much as any kid growing up with a gay parent. Trying to tell him otherwise would only be a lie, and when he grew older and — with the aid of friends, television, and the Internet — discovered this lie, I fear I would lose his trust forever.

Who knows what Tommy will be when he grows up? I only know who he is now, and he only knows who he is now. This is an ephemeral time in his life, and like most parents, I am amazed to watch him take what he learns at home and in the larger world and combine them to develop his unique perspective.

Two weeks after Tommy came out to me, he and I were picking out an outfit for him to wear to his cousin’s house, where he sometimes runs into his other crush, a girl twice his age named Jordan. Tommy explained that he wanted to wear a pink shirt but worried that Jordan wouldn’t think it was “cool” for a boy to wear that color. I tried to tell him that a lot of boys wear pink, but that didn’t reassure him.

“I got it!” he said at last. “When I get there, I’ll go up to Jordan and just explain to her that this shirt really isn’t pink. It’s magenta!” He ripped off his Batman pajamas, threw on his pink shirt, and checked himself out the full-length mirror. He didn’t need to wait to see if I approved.

Heather Aimee O'Neill teaches writing at CUNY Hunter College and is the Assistant Director for the Sackett Street Writers’ Workshop. A book columnist at AfterEllen.com, her poetry chapbook "Memory Future" was chosen by Carol Muske-Dukes as the winner of the University of Southern California's Gold Line Press Award and published this summer. Twitter: @HeatherAONeill