Vermont's "inverted skyscrapers" -- and their architects 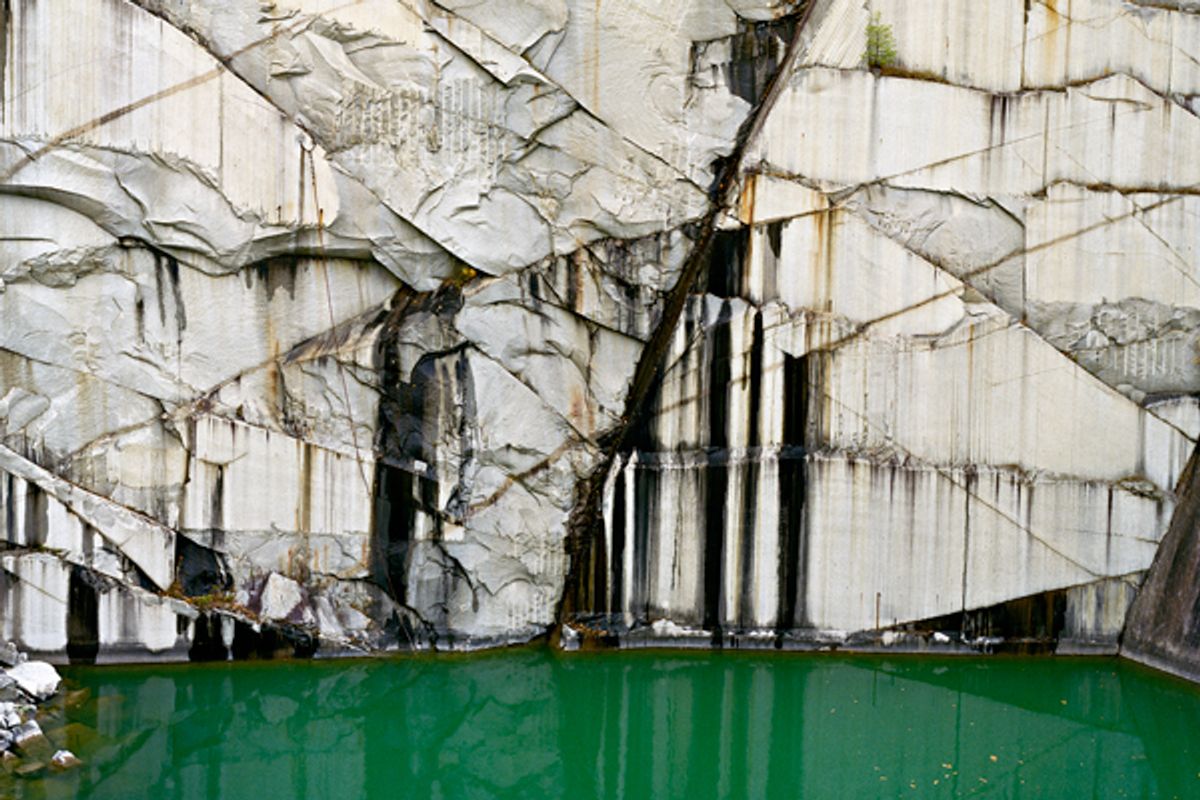 In the early 1990s, photographer Edward Burtynsky dreamed of finding "the reverse of a skyscraper" -- the negative space he assumed might be left behind when materials for major architectural works were harvested. In Vermont, he captured dramatic -- even "otherworldly" -- scenes from granite and marble quarries once worked by a dynamic community of Italian immigrants who carved a lasting social and cultural niche.

A number of Burtynsky's images will be exhibited and contextualized in a show set to open at Dartmouth College's Hood Museum of Art next month.

Over the phone, curators Juliette Bianco (from the Hood Museum) and Pieter Broucke (from the Middlebury College Museum of Art, where the show will travel next year) spoke to me about the themes of Burtynsky's work, and the added context this particular exhibition brings. Click through the following slide show for a preview.

How did this exhibition come about? How many of these photographs have been exhibited before?

Pieter Broucke: I became aware of Burtynsky’s photographs by way of a friend of mine, Raphael Bernstein, who owns a number of the photographer's works. [Bernstein] actually ended up loaning a number of photographs for the show. They’re absolutely amazing photographs. And since we are -- I am, at least -- at Middlebury College, here in Vermont, we thought it was worthwhile to look at the photographs that Burtynsky took of Vermont quarries, in a scholarly context. ...

In a sense you could say that it’s here in Vermont that Burtynsky became Burtynsky -- the internationally known artist who’s [recognized] for his environmental commentary through his photography. ... Burtynsky came to Vermont six times -- first in the fall of 1991, and then also in 1992. Over the course of these trips, you can see how his emphasis shifts from a formal approach -- interest in the spectacular forms of the quarry space -- toward the inclusion of an environmental commentary. Burtynsky increasingly looks at quarries as ecological scars, you could say.

As to the number of photographs that are new, I think it’s seven.

Juliette Bianco: And two of those show underground marble quarries [Slide 7] that we didn’t even know Burtynsky had photographed until Pieter and I were up at his studio about a year ago. Burtynsky had a chance to revisit all of his negatives with us, and we got the idea to present these underground quarries. Many people don’t even know they exist -- and yet I think they’re the most expansive underground quarries in the world.

PB: They’re not open to the public. It’s the first time that I've seen any images of them -- and what images they are, are absolutely otherworldly. Of the two that are included in the show, one evokes Piranesi -- this cavernous, endless, very dramatic space -- and the other looks like a scene from a science fiction film. They’re very powerful images.

The exhibition touches on the geological background to Burtynsky's work -- but it also examines the social and cultural history of the quarry workers who came to Vermont from Italy. Can you tell me a little about them?

JB: ... [W]e saw Burtynsky's photographs as a launching pad for looking at what else was happening in the region when Burtynsky captured this moment in time. Whose histories and what histories are embedded [here]? Of course, one of the most fascinating stories is that of these immigrants who came over at the turn of the last century -- and how they helped transform this industry in Vermont.

PB: The first Italians who came to work in the marble industry were actually headhunted in Carrara, through a connection that Redfield Proctor, who was the director of the Vermont Marble Co., had in England.

Proctor was able to headhunt four initial Italian stone-carvers. They came to Vermont, but initially they didn’t plan to stay; they were just going to come and teach their skills and then go back. They did end up staying, though -- and many, many Italians came in their wake.

[It's] remarkable that those Italians were headhunted. Unlike most of the Italians who migrated to the United States -- [many of whom] came from the South, from Sicily, and were basically unschooled -- the people who came to Vermont to work in the Italian stone industry came with very, very high prestige; they came with a very much sought-after set of skills, and also with very strong political convictions. All these things combined to form a strong Italian social/cultural presence in Vermont -- around Rutland, and perhaps even more in Barre, where the granite quarries were.

Many of these people also migrated within Vermont; many Italians migrated from the marble industry to the granite industry. This was partly because of the way the industries were organized: It was very paternalistic in the marble industry, because Redfield Proctor controlled everything -- whereas in Barre there were more individual workshops, and there were many more foreigners. [Barre] was really a multi-ethnic boom town for a while, and it became the de facto capital of anarchism in the U.S. between about 1915 and 1925 or so.

This was a very different kind of a migration experience for the Italians -- because they were headhunted, they were wanted, they were desired, and they came with a sense of labor organization that they brought with them from Carrara, that goes back to the Middle Ages ... Barre has an opera house; many small towns -- small villages, even -- in Vermont have opera houses; that’s because of the Italians, and the high prestige with which they came. To this day they celebrate the first of May in Barre -- a holiday that is not celebrated (as far as I know) widely anywhere else in the United States.

JB: One of the nice things about this exhibition is that this history keeps wrapping around itself. When Burtynsky came to start photographing quarries in 1991, and he started talking with the quarry owners and the quarry workers and taking these photographs, they said, “Well, if you want to see really big, vast quarries, you have to go to Carrara, Italy.” So he did a reverse trip -- his first trip outside of North America for his photography was to Carrara, because he was sent there by these quarry workers. This history profoundly affected Burtynsky’s own history of his photographic process -- because once he went to Carrara, he wondered where else in the world he would see these quarries, and he wound up creating his first conceptual photography series, "Quarries." He’s gone on to be internationally recognized for his conceptual work around other big industries, like oil and mining and manufacturing in China, etc.

One of the themes here does seem to be Burtynsky's observation of industry interacting with the natural world.

JB: Burtynsky started with this impulse to photograph nature, but then tried to think about what his voice was going to be -- what he was going to say. He chanced upon a coal mine in Pennsylvania, and started thinking about the relationship between industry and people and the industrial impact on our environment, based on consumerism. So even though photographs have been depicting the industrial landscape for over a century, and an art historian in our catalog talks about that history, it’s not really the social concerns or the labor concerns or the celebration of technology that were driving a lot of that earlier photography ... There’s this consumer consciousness bent, then, to the photographs that Burtynsky takes subsequently.

PB: I think what sets Burtynsky apart from any other photographers who have taken photographs of quarries, and of nature, for that matter, is that he really works as a conceptual artist ... [He started this project by looking] for what he called “inverted skyscrapers.” He said that for any skyscraper that is out in the city, there’s got to be a hole somewhere in the ground that is negative, downwards -- a space rather than a mass -- that more or less fits that shape. (This is not to be taken literally -- but you see what he means.) He started going around in Canada, which is where he’s from, looking at all these quarries, and he got very frustrated, because nowhere did he find scenes that would allow him to take photographs that fit what he saw in his mind’s eye. It was actually a quarry man in Quebec who told him he should go to Barre. And so then he came, in the fall of ’91, and indeed, that was it. He came back five more times.

There’s a very strong conceptual component to his work. And I think this is what makes these photographs such strong works of art.

PB: We’re both at educational institutions. Of course, these photographs have been shown widely -- or at least the work of Burtynsky [has]. This exhibition looks at these photographs within the context of his career; the photographs of the quarries of Vermont really have a pivotal position within the evolution of Burtynsky's development as an artist. The images themselves are worth examining ... in the context of migration, social history, geology, things like that. So in addition to the photographs themselves, the exhibition also has a small section on geology, with chunks of granite, chunks of marble and a geological map; we also have two cases of vintage photographs that beautifully comment upon the social history [of Barre]. Not to compete with the images of Burtynsky, but really to enrich them. This is also why there are photographs from Carrara included in the exhibition [e.g., Slide 8].

JB: Yes. You can tell the story visually, as well as through all these words that we just used!