Is it possible to rid the online classified site of child trafficking without shuttering its adult section? 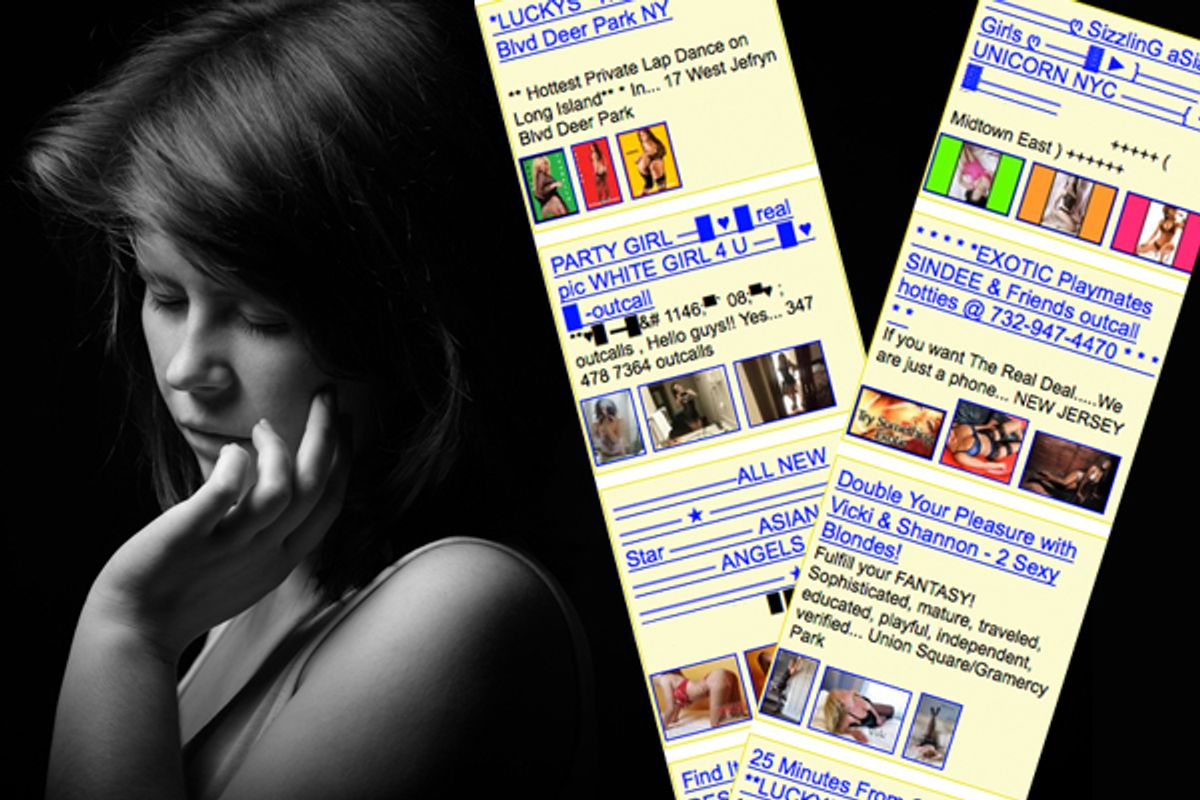 This week saw a renewed effort, led by the New York Times' Nicholas Kristof, to pressure Village Voice Media's online classified site Backpage.com to shutter its adult section. On Sunday, the Pulitzer Prize-winning journalist offered up a harrowing story about "Alissa," whose pimp used the site to sell her for sex at the age of 16 and 17. A couple of days later, Kristof responded to a Village Voice article claiming that his original column contained factual errors with a rebuttal and a call for Backpage to "get out of carrying prostitution advertising" altogether.

For many progressives, there is a dramatic tension here: Horror at the existence of child trafficking, and a desire to see it disappear, and yet a belief that consenting adults should be able to do what they want sexually -- maybe even if it involves the exchange of money. It’s not even a question of one concern trumping the other, because, while theories abound, it’s unclear what impact the shuttering of Backpage’s adult section would have on trafficking as a whole, let alone whether similar ads wouldn't just pop up in the personals section; nor is it clear what impact the site’s screening measures have had on reducing trafficking ads.

It’s hard enough nailing down accurate figures on the number of children trafficked in the U.S. each year -- the most commonly cited estimate is 100,000 to 300,000, but the Village Voice claims those figures are wildly inflated and "hatched without regard to science." We do know that more than 50 cases of child trafficking (attempted or otherwise) on Backpage have been reported over a three-year period, which brings up another quandary: Do we castigate the site for failing to detect those ads or celebrate these as cases where traffickers were actually caught? Furthering the contradiction: Backpage is both friend and foe to traffickers. It’s an ideal advertising outlet, but it’s also one of the most, if not the most, relied upon tools for law enforcement to identify child trafficking victims.

Given the complexities here, details are especially important -- and they've gotten lost in this emotionally charged debate. For example, it's worth taking a closer look at what Backpage does do to vet ads. Liz McDougall, general counsel for Village Voice Media, tells me the site “operates an automated filter system to preclude ads with suspect words and phrases.” The specifics of the system are guarded by lock and key to make it harder for traffickers to circumvent it. On top of this, Backpage has real-life human beings manually review all submitted content for the adult and personal sections before it’s posted on the site. Just to be double sure, Backpage does another manual review of all material once it’s actually published in either section.

When Backpage identifies an ad potentially advertising a minor, it "immediately reports it to the National Center for Missing and Exploited Children," and an “‘expedited’ reporting system” is in place for cases “where there appears to be an imminent possibility of rescue.” All postings require a credit card number, which can be subpoenaed by law enforcement, and Backpage has a policy of responding within 24 hours, says McDougall. She adds that the site “stands ready and willing to do more,” especially “in cooperation with government, nongovernmental, public, private and all other interest groups sincerely dedicated to pragmatic approaches to addressing this scourge.”

Backpage is attempting to both prevent traffickers from advertising on the site and to assist law enforcement in cases where they do slip through -- but is it enough? The site's outspoken critics certainly don't think so. Short of no longer carrying sex ads, Kristoff suggests that Backpage require an ID check for those placing ads to ensure that they are adults -- but that only addresses trafficking cases where the minor is advertising herself.  “I assume that critics sometimes urge age verification anyway because child sex trafficking is a horrific crime and we want to feel active in fighting it,” McDougall says. “But it does not help the problem to advocate measures that have superficial appeal but no real effect.”

Ultimately, most critics will accept nothing less than the site shutting down its adult section -- but this will likely direct business elsewhere (just as Craigslist’s shuttering of its adult section drove traffic to Backpage), and potentially to less cooperative businesses.

That's not to mention that many sex worker activists argue that closing Backpage's adult section will make it harder, and more dangerous, for those who are willingly in the industry to ply their trade. "What it comes down to is what keeps the most people the most safe, and what actually makes sense for sex workers," says Sarah Patterson, a community organizer for the Sex Worker's Outreach Project's New Work City chapter. She argues that the ultimate answer is decriminalizing sex work while also protecting those who are being coerced into the business; and in this particular case, she says it's allowing adults to sell sexual services on Backpage while also going after those selling non-consensual services. "For a lot of people that's really hard to imagine," she says, explaining that sex work is generally seen only in black and white terms. "Unfortunately for me, that is the solution."