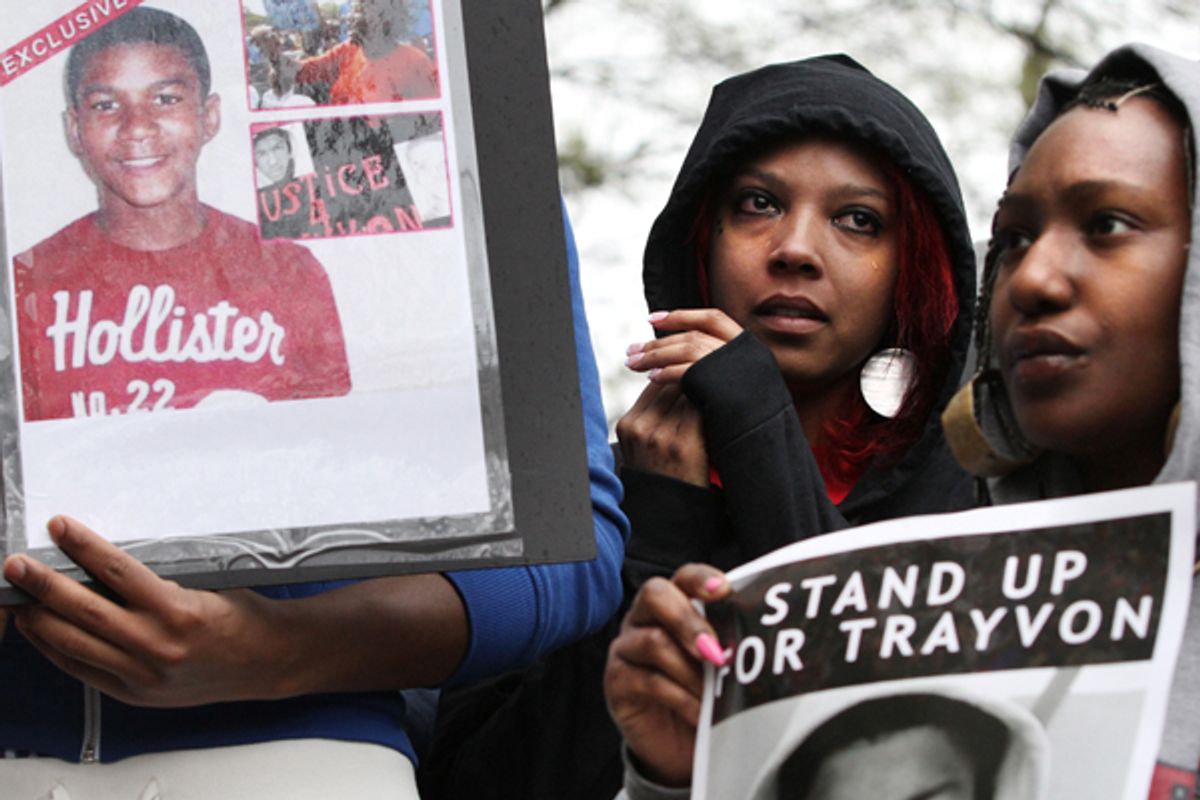 It was all too good to be true.

Last week even conservatives expressed concern about the way Sanford, Fla., police handled the death of unarmed, 17-year-old Trayvon Martin, one month ago today. Florida's Tea Party Gov. Rick Scott asked for an outside investigation, and another Tea Party favorite, Rep. Allen West, fumed, "This is an outrage." Senate Minority Leader Mitch McConnell called it "an incredible tragedy" and said, "I'm glad it's being investigated and we'll take a look at it as the investigation moves along." Then President Obama made a cautious comment of sympathy with Martin's parents, noting, "If I had a son, he'd look like Trayvon," and our Kumbaya moment predictably ended.

What wasn't quite as predictable was the last few days of push-back on behalf of accused shooter George Zimmerman – helped along by Sanford Police. Of course Zimmerman is innocent until proven guilty. New details indicating there was a struggle between Martin and Zimmerman might turn out to be true. But nothing in those details undermines the argument that the cops botched the handling of Martin's death – in fact, they underscore that case.

If Zimmerman was indeed hurt in a scuffle with Martin – and news reports suggest he was bloody and bruised, with head lacerations that came from Martin pounding his skull into the sidewalk – why are there no photos? Why wasn't Zimmerman taken to a hospital?  The fact remains: An unarmed teenager was shot dead, and the man who shot him faced no rigorous interrogation. Can anyone believe that if the circumstances were reversed, and the young black man was the shooter, he'd have walked away without at minimum a meticulous collection of evidence? It's hard to imagine he'd have walked away at all. The police were entirely too quick to believe Zimmerman had to shoot the boy in self-defense.

Also Monday we learned that Martin had been suspended from school because officials found an empty baggie that once held marijuana (that's after Geraldo Rivera told us he brought on his own death by wearing a hoodie). Wow. A teenager might have smoked weed. Stop the presses. There is indeed something outrageous about that story – and it's the fact that Martin was suspended for having merely an empty bag that once held weed under Miami's "zero-tolerance" drug policy. I happen to think marijuana should be decriminalized, and I also believe schools have gone too far with their "zero tolerance" rules. This was a young man described as an A and B student who "majored in cheerfulness." He had no known arrest record. It's not too much to say that Trayvon Martin would still be alive if he hadn't been suspended; he only visited Sanford in the first place because he was out of school.

And what does Martin's suspension have to do with this case, anyway? That and other details are now being selectively released by Sanford Police, whose early reports about what happened were noteworthy for their factlessness. Why are police helping impeach the character of Trayvon Martin, while selectively confirming details that suggest he was the aggressor? (That wasn't the worst attempt to smear Martin, by the way. Michelle Malkin's website Twitchy posted a photo it claimed was Martin in saggy pants, giving the finger -- and later was forced to admit it wasn't Martin. It's still making the rounds on conservative and white supremacist sites, anyway.)

We still don't know what happened on the night of Feb. 26. Zimmerman's friend, Joe Oliver, has been making the rounds of television news shows saying Martin was the aggressor, and his friend was scared for his life. Oliver, who happens to be black, minimizes reports that Zimmerman was a regular 911 caller, who'd called 911 at least 46 times in the last seven years, often about suspicious-looking young black males, one of whom was 9. Oliver also suggested that Zimmerman said "fucking goon," not "fucking coon" on the 911 tape the night Martin died, and added the befuddling notion that "goon" may have been a term of endearment. (Update: According to Reuters, Oliver did not hear the story from Zimmerman but was "relating stories told to him by Zimmerman's mother-in-law, a close friend of Oliver's wife." Oliver turns out to have worked as a news anchor here in San Francisco, at KPIX and KRON.)

For what it's worth, teachers and others who knew Martin say they don't believe Zimmerman's version of events (as told through Oliver). "There's no way I can believe that, because he's just not a confrontational kid," his football coach, Jerome Horton, told the media. "It just wouldn't happen. That's just not that kid."

It's hard not to notice that the push-back began once President Obama made his remarks Friday. Two consummate race-baiters, Newt Gingrich and Pat Buchanan, blasted the president. Gingrich called his remarks "disgraceful" and suggested Obama's comments meant he wouldn't have been concerned about the murder had Martin been white. Buchanan said the president should stop siding with those who are "stirring up racial rage." An expert on stirring up racial rage, Buchanan is the last person to be giving Obama advice about race.

The fact is, whatever turns out to be true, the president was right: This case looks like too many others where a young black man was gunned down for being a young black man. A 17-year-old was shot to death, and no one was taken to a police station to be questioned about it. It then took police three days to locate the dead boy's family. Now they're sliming him with anonymous leaks.

Whether or not Martin was wearing a hoodie, or had ever used marijuana; whether or not he and Zimmerman had an altercation that night: at minimum, the cops botched this investigation, and didn't do anything like what should have been required in a case when an unarmed 17-year-old shows up dead. That's the bottom line here. Trayvon Martin didn't have to be a polo-and-khakis-wearing Boy Scout to have his rights respected. Did some of his family's defenders go too far in depicting him as a fresh-faced child, as some on the right allege? We don't know that. We only know that the family and their many supporters have cobbled together a movement to demand justice, and they've used the facts they had at their disposal. Had the cops done their job, they wouldn't have had to.