How the New Hampshire GOP voted to keep gay marriage

Tune out Rick Santorum and Mitt Romney. Events in the Granite State suggest the GOP base is rethinking gay marriage 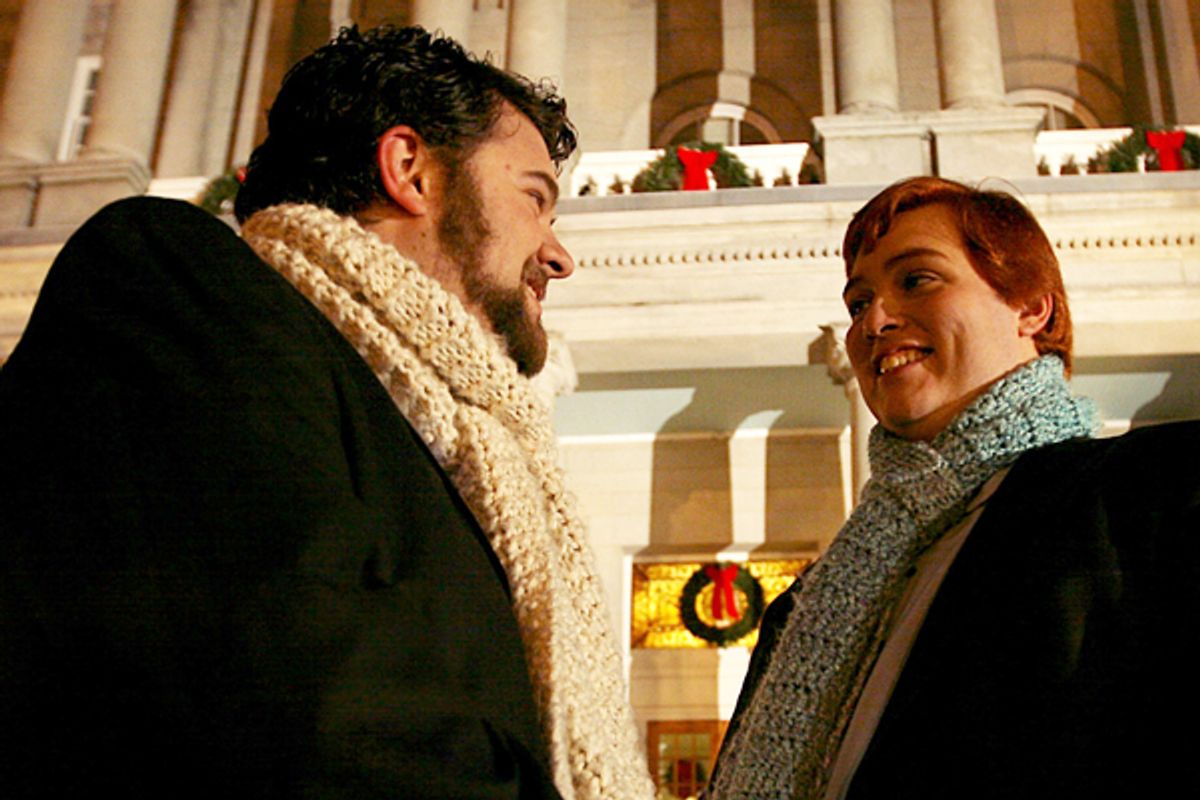 A couple waits to be wed at New Hampshire's Statehouse in Concord in January 1, 2010. (AP/Cheryl Senter)
--

Last week the overwhelmingly Republican New Hampshire statehouse voted, well, overwhelmingly to preserve gay marriage. The bill under consideration would have made New Hampshire the first state to repeal gay marriage. Initially, gay activists only hoped to keep the vote under two-thirds of the House, so that Democratic Gov. John Lynch could torpedo it with a veto. But when it came up for a vote, it didn’t even capture a majority of the House’s 297 Republican representatives, elected in the conservative tsunami of 2010.

How can this be? We’re in the middle of a Republican presidential primary, normally a time for conservatives to beat their chests over social and culture-war issues. And the most recent Republican Party platform promises to amend the United States Constitution to prohibit any further gay nuptials.

Freedom to Marry, which led the campaign against the repeal bill, credits its success in part to inroads it has made nationally with Republicans. Freedom to Marry’s founder, Evan Wolfson, credits conservatives like Ted Olson -- who led the challenge to Proposition 8 in California -- and former Republican National Committee chairman Ken Mehlman with accelerating that trend. Mehlman, newly out a year or two ago, was “very effective,” Wolfson says, in guiding them in New Hampshire. And polling showing an overwhelming opposition to the bill in New Hampshire certainly did not hurt.

What this conventional analysis misses is how weird the New Hampshire Legislature is. As a result of a failure to agree on redistricting 10 years ago, the New Hampshire Supreme Court brought in an outside consultant, who created large multi-member districts for the state. Under his plan, there are an unbelievable 403 members of the statehouse. Many districts have as many as four or more members representing them. If the U.S. Congress were constituted like the New Hampshire Legislature, it would be just shy of 100,000 members. New Hampshire pays its 400-plus legislators almost nothing for their service, and they don’t have to be in session very much. Taken together, these characteristics make for a very unusual legislative population.

First, they’re almost always newbies. Multi-member districts like New Hampshire’s tend to vacillate wildly between parties, because there is no partisan gerrymandering to protect the status quo. Predictably, New Hampshire went astonishingly Democratic in 2006 and then unbelievably Republican four short years later. Second, the people who go to the Legislature regard it as more like a civic duty than the first step on the road to a career in politics. Random people, say, angered by a power plant or by the treatment of the mentally ill can run for office, and win with just a few thousand votes. As a result, the 297 Republicans in the 2012 New Hampshire House of Representatives actually function more like a plebiscitary democracy than a representative government organized by party.

Given the Republican legislators’ plebeian roots, the results in New Hampshire are more promising than the jubilant headlines and the conventional explanations. It suggests a support for gay marriage in actual communities -- a support that might be obscured if these communities’ representatives were elected in a way that required them to stick more strictly to the GOP’s anti-gay party line.

To be sure, New Hampshire is not a pure sample of the national Republican Party. But for some time, polling has been hinting at a steady increase in support for same-sex marriage even among Republicans. The recent NBC/Wall Street Journal poll not only showed 49 percent of Americans in favor (with only 40 percent against) but a 9-point rise in Republican support for marriage, to 31 percent in favor.

It’s not that Republicans have suddenly turned into agents of social change. Rick Santorum is legendary for his enmity to same-sex marriage, and Mitt Romney sketched out his position recently in a press release describing same-sex marriage as against “our values.” Even in New Hampshire, Ovid Lamontagne and Kevin Smith, the 2012 Republican candidates for governor, who are running conventional campaigns with all the political constraints missing in the weird New Hampshire Legislature, both say they would sign a bill repealing same-sex marriage if the Legislature produced one.

But here’s the point: They’re not shouting over each other with anti-gay positions. Lamontagne says the issue is “not a top priority,” as he doesn’t think it “concerns residents” as much as other issues, and Kevin Smith doesn’t want it on his agenda, either.

In fact, even Romney and Santorum aren’t pushing their anti-gay-marriage lines as aggressively as they are other social issues regarding women’s health. When asked how Republicans could be moving in the direction of gay rights while fighting a scorched earth campaign against women, Wolfson noted that one important factor is that at the end of the day gay rights don’t threaten the private regime of white male power the way racial and feminist movements do. And of course it doesn’t hurt the gay cause that fearless advocates relentlessly extract a price for attacking their community. Google “Santorum.”