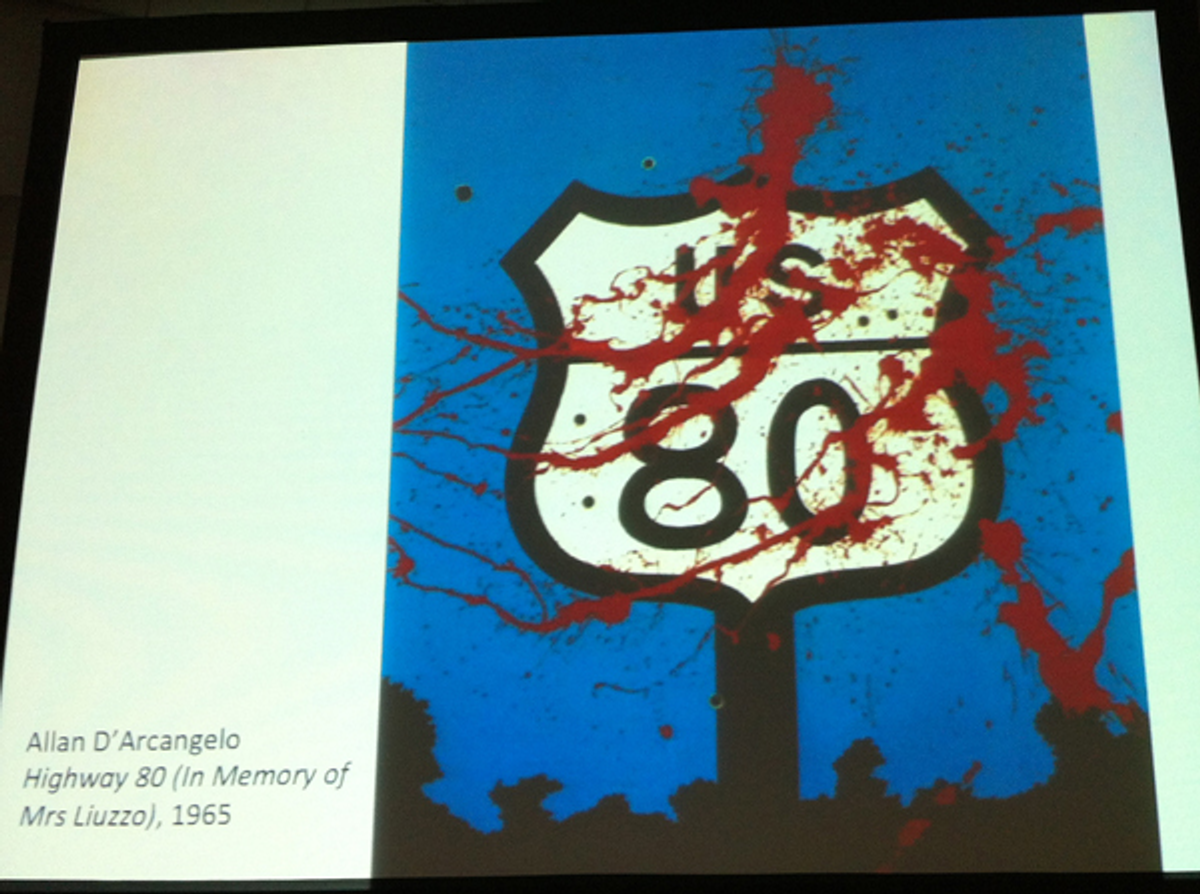 Popular culture, capitalist critique and female empowerment are among the topics of this, the last of a three-part feature on "Pop and Politics," one of the programs at the 100th annual College Art Association conference in Los Angeles. Part one, my interview with Anthony E. Grudin about Andy Warhol and comic books, is here. Part two, the first half of this interview with art historians Allison Unruh and Kalliopi Minioudaki, who organized "Pop and Politics," is here.

Michael Dooley: How did you select your panelists?

Allison Unruh: Well, we were really lucky to have a lot of great submissions come our way with a range of approaches and artists represented. We ended up deciding to limit the scope of the panel specifically to the 1960s, however. We wanted to engage with the decade that witnessed the historical formulation of pop. We were particularly excited with how the papers turned out, and feel really fortunate to include what we believe are some strong new critical voices in postwar art historical studies.

Kalliopi Minioudaki: We also thought that particular papers indicatively engaged diverse cultural scenes of pop, suggesting paths that still need to be taken. We had Hiroko Ikegami’s unpacking of the cross-cultural exchange that informs Japanese responses to Pop, as well as Jasper Johns’ pop in Japan. There was Agata Jakubowska’s enlightening of the meanings of pop iconography across the iron curtain in light of the work of Alina Szapocznikow and Roman Cieślewicz. And there was my discussion of the political aspects of Francophone Pop. There are, of course, so many more international contexts and practitioners that could be included.

AU: In terms of reevaluating some of the U.S.-based proponents of pop, Tom Williams examined how Claes Oldenburg responded through art to his experience being beaten while part of the protests at the 1968 Democratic National Convention in Chicago, a really nuanced reading of this anomalous and activist moment in his career. Seth McCormick likewise brought another dimension to the table, taking on the issue of masculinity and mass subjectivity during the McCarthy era through the lens of Johns and Robert Rauschenberg. Meanwhile, Nadja Rottner’s contribution was really important to us in terms of bringing performance into the conversation, examining Oldenburg’s early performances that pointedly critiqued Cold War-era America.

KM: The papers gave us a great opportunity to cast a more inclusive look at pop and avoid its frequent critical understanding as painting – usually inflected by mechanical reproduction – by opening our discussion to other media. We also wanted to test facile understandings of its politics, as with Martin Berger’s questioning of the progressiveness of the politics of Andy Warhol’s "Race Riot" series. Moreover we wished to promote aspects that need further investigation, such as the role of class in Warhol’s embrace of pop culture, as masterfully manifested by Anthony Grudin.

Is 1960s pop art still relevant to our current cultural and political climate?

KM: Whether seen as the last realist language of modern life or as the first metalanguage, the legacy of pop art in contemporary art production is undeniable. It’s also contingent with the continuum of culture which seems to have been achieved in this advanced stage of the mass-media revolution and which Lawrence Alloway, pop’s christener and one of its chief supporters, saw as enabling the democratic potential of pop in postwar society. No matter how its manifestations are defined, and whatever old or new media are being used, contemporary art often engages with reality through its overwhelmingly mediated face in a way that harks back to the mediated semblance of classic pop.

Pop’s pedigrees, which comply with its popular, received definition as apolitical, persist and perhaps remain irrelevant to the contemporary political climate. But if we take into consideration, to suggest an example, the exposure of the complicity of consumerism and war, or third-world destitution, in the work of artists such as James Rosenquist and Chryssa Romanos, as critique of the fallacies of capitalist democracy, then we can unravel commentaries that seem timely under the current international crisis of capitalism and that resonate with contemporary political art.

AU: I would add that Pop’s multifaceted engagement with the issues of consumerism and mass communication makes it really relevant to the present day, where those elements of modern life are only magnified.

And who among today's artists are creating works that relate to your “Pop and Politics” themes?

KM: I would not like to create new “neo-neo” or post-pop canons. A walk through art fairs, and a look at international contexts, offers a variety of better or lesser known artists who carry such a legacy. What I would like to say, however, is that several women artists today engage in diverse feminist dialogues with popular culture – whether personal or impersonal, humorous or cool, critical or affirmatively empowering and occasionally performative – in order to speak about issues that still matter to us as women. Such issues range from the exposure of the pitfalls of pop culture for women and the sexism of visual culture to the promulgation of female desire, while the strategies used to address them often redeem the pleasures of pop culture’s consumption through its empowering potential for women.

Unbeknownst to themselves – with few exceptions, such as the Polish Paulina Olowska, whose body politics often pay homage to Pauline Boty, with whom she was exceptionally familiar in Poland – most of these artists follow paths that were, in many senses, pioneered by women who intersected with Pop Art in the 1960s, such as Axell, Pauline Boty, Rosalyn Drexler, Jann Haworth, Chryssa Romanos, Marisol, Martha Rosler, Niki de Saint Phalle, Marjorie Strider, etc. Here I’m thinking of artists such as Tracey Emin, Tracey Moffatt, Laurie Simmons, Mariko Mori, Wanda Ewing and numerous others, but also neo-Pop foremothers such as Cindy Sherman, Barbara Kruger and Dara Birnbaum.

The strategic use of pop culture by younger women artists today seems to have been enabled by post-1970s feminist art, with its vocabulary often harking back to classic – men’s – pop due to the repression of women pop artists’ legacy by their marginalization. But it’s important to acknowledge the dialogue that their practices amount to.

AU: I’d just mention one more artist who comes to mind whose work might connect in another way to the intersection of pop and politics: Josephine Meckseper. Her work explores issues of power, consumption, and politics that relates in a way to a legacy of pop combined with other conceptual practices, strategically deploying certain codes of pop to critique capitalist excess.

Salon is proud to feature content from Imprint, the fastest-growing design community on the Web. Brought to you by Print magazine, America's oldest and most trusted design voice, Imprint features some of the biggest names in the industry, covering visual culture from every angle. Imprint advances and expands the design conversation, providing fresh daily content to the community (and now to salon.com), sparking conversation, competition, criticism and passion among its members.