The GOP candidate who actually hates the media

Mitt Romney hates the press more than Santorum does, he just doesn't have a potty mouth 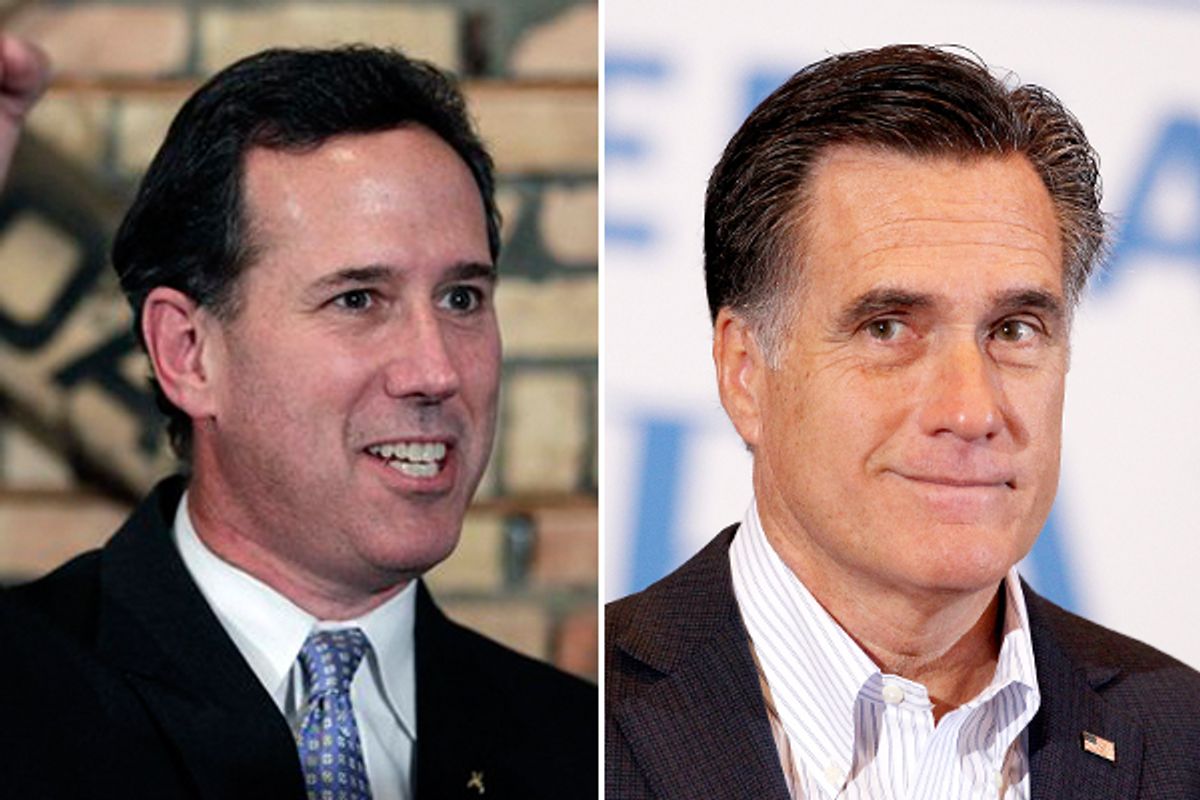 This weekend, Rick Santorum blew up at New York Times reporter Jeff Zeleny (whose questions for politicians have themselves become national issues of pointless debate before). The whole angry rant, which Zeleny says was largely for the benefit of the cameras, peaked with Santorum saying, "Quit distorting my words. If I see it, it's bullshit." The Santorum campaign more or less immediately capitalized on the pseudo-spontaneous outburst with an email blast fundraising off the video. ("A subscription to the New York Times cost approximately $30," it reads. That's not really remotely true.) Santorum then went on Fox and Friends to deliver the campaign's well-crafted line: "If you haven’t cursed out a New York Times reporter during the course of a campaign, you’re not really a real Republican."

Left unsaid is that a certain candidate would never "curse out" a New York Times reporter, because a certain candidate simply doesn't curse. Mitt Romney can't bring himself to say "hell" in public. When, during the 2002 Salt Lake City Olympics, Romney was accused of publicly berating a volunteer security officer, he denied only that he swore while doing so: "I would not, have not, and never would use the f-word,” he told the press. He admitted only to saying “H-E double hockey sticks.” The irony is that Romney actually has a horrible relationship with the press, he just doesn't make a big show of it.

Romney fundamentally distrusts journalists. He freezes them out. When he was in the private sector, he could happily ignore them. In politics, he prefers to manage them with as much distance as possible. His campaign was notorious for essentially ignoring journalists entirely, until they belatedly realized that, you know, journalists could be induced to write nice things about the candidate if they are treated humanely. Hence: baked Lays for the press corps and an Ann Romney charm offensive.

When your candidate's media strategy is total avoidance, you don't really get conservative movement "cred" for hating the liberal media. Meanwhile, Newt Gingrich lives for the attention of the press, and his ostentatious displays of media hatred are basically what Santorum was trying to emulate this weekend.

In 2007, Romney lost his cool with AP reporter Glen Johnson. Here's Romney, unfiltered and pissed off!

"Excuse me, excuse me, Glen!" You accuse Mitt Romney of lying, you get a stern but polite response.

You attack Mitt Romney's religion, and then accuse him of "running away" from his church, as Iowa conservative talk show host Jan Mickelson did in 2007, and you get ... firm, polite debate!

This gets raw 10 minutes in, when they go off the air. "You're wrong!" is about as salty as it gets.

Unhappily for Romney, he gets the same treatment from Fox News that it typically saves for liberals -- there's no "safe" media outlet to shill for him, as Fox does for most other Republican candidates. Romney's entire media base is perhaps a few newspaper columnists.

Romney-hating conservatives are ignoring the candidate who hates the mainstream media most of all. If he could find some way to get that message across, keeping in mind the challenge of avoiding profanity, he might have an easier time in this endless primary.