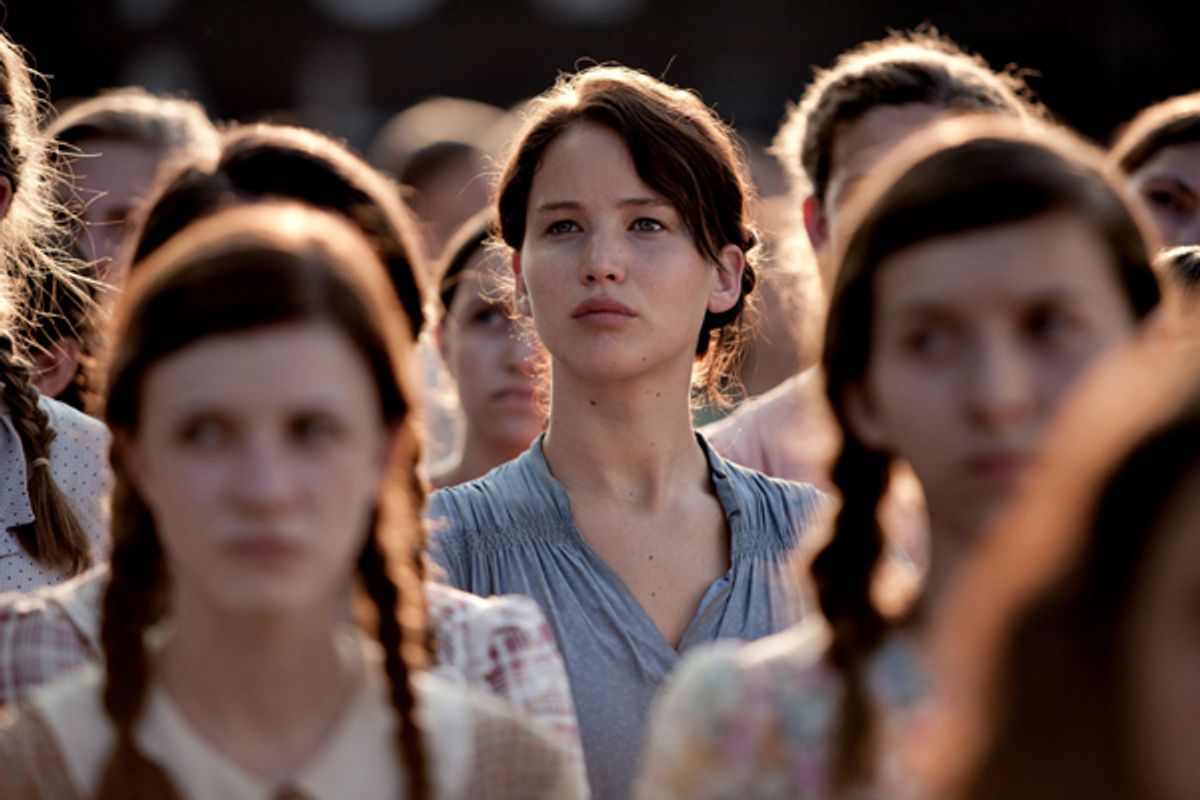 Like a lot of other people, I spent a good chunk of last week talking about "The Hunger Games." Because I've written about the books for various publications over the past couple of years, journalists called me up for quotes about the series' appeal. Along with the usual questions about depictions of violence, the popularity of dystopian narratives in young adult fiction and whether or not Katniss Everdeen is a "good role model" for girls, there usually came a point where the interlocutor observed that the movie was going to make the books hugely popular.

Well, yes. But also: no. "The Hunger Games" series was already hugely popular, long before the movie was even shot. The first book alone has spent well over two years on the USA Today bestseller list. The films will doubtlessly promote the sales of even more books, but isn't that a bit beside the point? The books made the movie a hit, not the other way around. The real story of this weekend's record-breaking box office returns for the movie version of "The Hunger Games" is the awesome cultural power of young readers, especially young girls.

Monday morning media coverage credited producers and marketers at Lionsgate for the movie's success, and by all accounts (I haven't seen it myself), the film is an effective adaptation of the books. But a good movie and a canny promotional campaign aren't enough to make hundreds of people camp out in a tent city to await a movie's premiere. That kind of enthusiasm only comes from a fandom, an organized, well-networked, convivial mass of people who really, really love something and want to talk about it -- a lot.

Last week, I wrote about the professionals in the children's library, bookselling and publishing worlds who helped make "The Hunger Games" a hit even before it was published in 2008. But as smart as those adults are in identifying and promoting books to young readers, they can't create a fandom, either (although many of them are themselves fans). A fandom is a self-generating, self-reinforcing, snowballing phenomenon.

Before the Internet became part of everyone's everyday life, a reader who was blown away by a book and dying to talk about it might insist that a friend read it, too. Today, she'll still urge the book on her friends, but she'll also go online to find equally obsessed readers who are already discussing it in a forum or blog. Over time, these fellow fans can become friends, perhaps close ones, even if they never meet in the flesh. They recommend new books to each other and circulate news about the favorites that brought them together in the first place.

Fan networks like these, not movie studio promotional campaigns, were what fostered the drumbeat of excitement leading up to the release of "The Hunger Games" movie. Marketers can egg them on by feeding them tidbits like casting news and poster art, but they don't create the interest in the first place, and they can't really control it.

For a long time, organized fandom was seen as primarily a guy thing. The two primary types of hardcore fandom -- comic books and science fiction -- had many female members, of course, but as the term "fan boy" attests, the most visible, vocal and vehement tended to be male. Meanwhile, the primary manifestations of female fandom were the screaming preteen followings of bubble-gum pop bands: avid, yes, but dismissed as the passive, easily manipulated consumers of disposable, prefab culture.

The success of the "Hunger Games" film is the apotheosis of a new kind of young female fandom, one that has its roots in books and owes its flourishing to the Web. The old, predominantly male fandom for comics and science fiction preexisted the Internet and was one of the first subcultures to take advantage of it. The fandom for "The Hunger Games" grew (in part) out of forums and other networks set up by "Twilight" fans, which in turn grew out of the fandom for "Harry Potter." These fandoms, which flourished during the advent of social media, are certainly not entirely female -- any more than science-fiction or comics fandoms are entirely male -- but most of the people who establish, maintain and participate in them are young women.

On Monday, the New York Times reported that the weekend audience for "The Hunger Games" was 39 percent male, "another sign of a cultural juggernaut." The most recent "Twilight" film, the Times pointed out, attracted an audience that was only 20 percent male. But "The Twilight Saga: Breaking Dawn, Part 1" still brought in $138 million (domestic) on its first weekend, compared to $155 million for "The Hunger Games"; nothing to sneeze at.

Like the Times, you could look at these figures as an indication of how much better a movie franchise can do when it appeals to young men as well as young women -- or you could just acknowledge the fact that a movie can now be a big hit without appealing to young men at all. As far as their stories go, "The Hunger Games" doesn't have much in common with "Twilight" (or, for that matter, with the Harry Potter series), but what all three hugely popular franchises do have in common is their origins in bestselling books whose readership was either primarily female or at most 50/50, and whose most active fans are girls.

That's a big change from the days when conventional wisdom held that any popular blockbuster had to speak to the movies' core audience of teenage boys. That was the notion that gave us two decades of superhero pictures. Maybe it was even the thinking behind this season's most notorious flop, "John Carter." If I were a movie producer, I'd be hightailing it out of the comic shop and turning to the YA shelves in my local bookstore to look for my next project. That's where the girls are.

The making of a blockbuster: a Salon exclusive on the behind-the-scenes story of the readers and booksellers who launched the Hunger Games franchise