It may be impossible to make any serious predictions about a far-off race, but that has never stopped a pundit 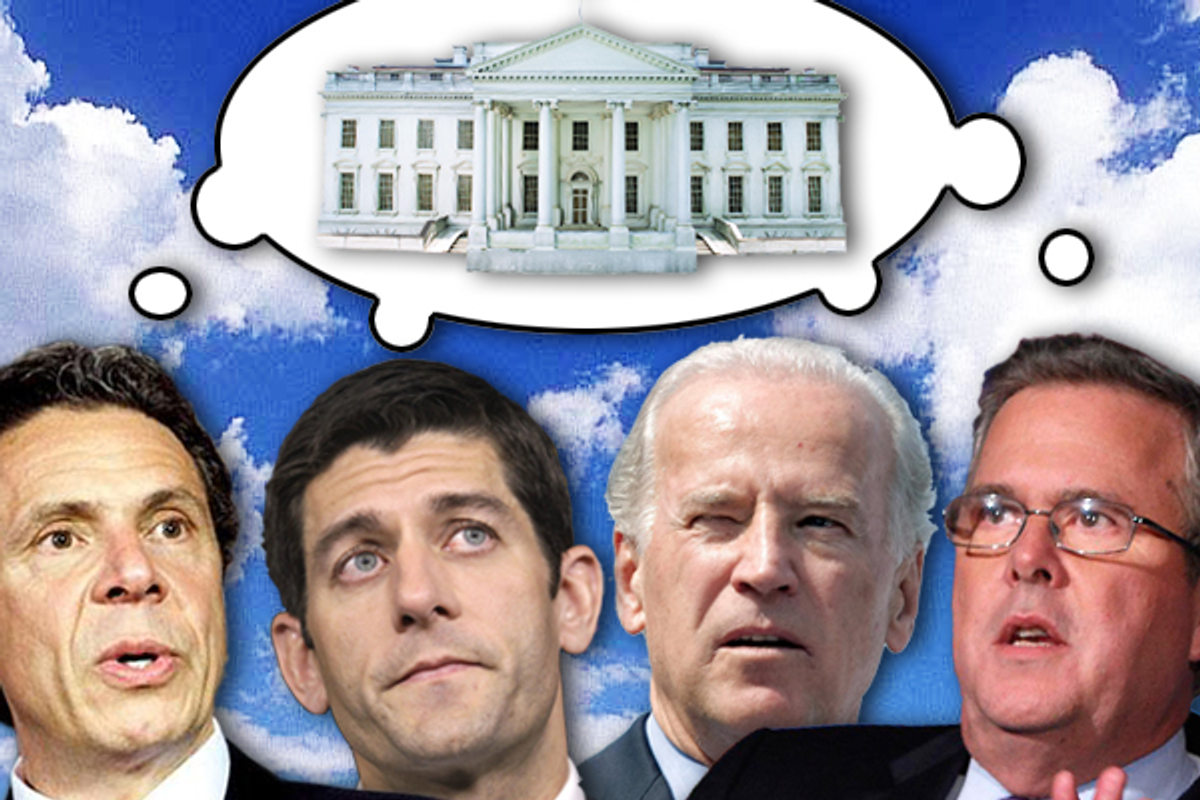 Being that it's still March 2012 and we have no way of knowing who will actually be president by the end of January 2013 (besides "not Ron Paul," obviously), it would seem to be a bit premature to speculate as to how the 2016 presidential race will shake out. And yet political reporters, finally bored perhaps with the inevitable Republican nomination of Mitt Romney, are already spewing forth predictions. Chris Cillizza at the Washington Post has even created a "Sweet 2016" bracket.

The most important lesson of terrible premature presidential-campaign speculation is that nearly everyone who engages in it will be terribly, hilariously wrong. It doesn't matter if you're a complete buffoon, like Dick Morris, author of the 2007 classic "Condi vs. Hillary: The Next Great Presidential Race," or someone fairly serious and "savvy," like New York Times politics reporter Matt Bai, who posited current nobody Mark Warner as the future of the party in a 2006 Times magazine cover story now best (if barely) remembered for its altered and unflattering photo of the subject.

There will be events no one could've predicted -- like "obvious" future Republican presidential contender George Allen using an obscure racial slur on camera, or John Edwards being generally John Edwards -- that destroy promising careers in an instant.

Some people turn out to be awful at campaigning: Like Wesley Clark, the general who was going to sweep a troop-worshiping country off its feet and away from George W. Bush, until it turned out that he did not blink like a human. Or Rick Perry, who, it turned out, seems too dumb to dress himself when asked simple questions on television.

There are times when this sort of long-range forecasting is easy until you overthink it: John McCain was the logical 2008 front-runner the moment he addressed the 2004 Republican convention, until you started daydreaming about Fred Thompson's seductive drawl. Al Gore was pretty obviously going to be the Democratic nominee in 2000, and boredom with his inevitability might've had a hand in how the political press helped destroy him that year.

A hell of a lot will obviously depend on whether or not Barack Obama wins reelection. If he loses, Democrats might suddenly find white candidates from the West or the South more attractive. If he wins, we might have to take Joe Biden semi-seriously for a few unlikely news cycles. If Obama ends a second term as popular as Clinton, someone associated with his administration is certainly more likely to be nominated than if Obama's 2015 numbers look more like Bush's in 2007.

So let's get to the predictions, shall we? According to Cillizza, the "number one seed" for 2016 is New York Gov. Andrew Cuomo. (Mark Warner is still on the shortlist, by the way. His time will come!)

Cuomo is the reasonably popular governor of a very populous state. He's thus far managed to balance liberal base-pleasing deeds (gay marriage!) with "moderate" newspaper editorial-board pleasing things (going after the pensions of public employees!). But we're still talking about a Northeast liberal (or "liberal") -- from New York! -- who's living with but not currently married to a celebrity television cook who makes awful-looking garbage food out of prepackaged garbage food. The Democratic Party might not want to chance another blatantly culturally urban candidate. (I mean urban in the literal sense, and not as weird racial code.) Plus he's in the honeymoon portion of his governorship, and that job has utterly destroyed its last two holders.

Plus, Cuomo looks like he's on pace to use up much of the goodwill he built up with liberals after signing gay marriage into law. (So far there's been his apparent lack of interest in transit, signing awful gerrymandered legislative and congressional district lines, and his property tax cap.)

Joe Biden has run for president twice and never come remotely close to winning a single primary. He'll be 74 in 2016. As Steve Kornacki already pointed out, Republicans are much more likely than Democrats to nominate 70-somethings. He's also a gaffe-prone goofball whose appeal is that he's a ridiculous character. I would not put a lot of InTrade money on Joe Biden winning the Democratic nomination in 2016.

Hillary Clinton is a bit younger than Biden, and a lot more serious than Biden. But does she still want to be president? Who knows. (Anyone who says they know is lying.) And if she runs in 2016, does she hire the same asinine campaign team that lost her the nomination in 2008?

After those three, we're already essentially in "who?" territory with the Democrats. Not to say that someone no one has heard of now won't be the nominee -- with Democrats, you may be more likely to get a relative unknown than with Republicans -- but we can't know which governors or senators will turn out to be Barack Obama (or even John Edwards) and which ones will turn out to be... well, Mark Warner.

And theoretically there would be more women vying for the nomination than just Hillary Clinton. Cillizza posits New York Sen. Kristen Gillibrand -- a long shot, in my estimation -- and senatorial hopeful Elizabeth Warren, who, if she loses her election, would surely be out of the running, and if she wins, would be ... a liberal senator from Massachusetts. So, I dunno, Amy Klobuchar? Sadly, four of the current six female governors are Republicans. The two Democrats are North Carolina's Bev Purdue, who is currently polling poorly enough that she's announced that she won't seek reelection, and Washington's Christine Gregoire, who seems cool, so let's just put her on the fantasy shortlist. (Oh, I guess the Times already did.)

But you see where we are, at this point: Randomly tossing out names. It's like predicting the 2016 NFL Draft. Some of these kids are still in high school!

As for Republicans: If Mitt Romney wins the election, there's the candidate, fun speculation time done. (Unless Newt and Ron Paul mount a primary challenge?!?) If he loses, the party likely learns the lesson it always learns and lurches to the right for a while, and your front-runner in that case (assuming he doesn't blow up the party at the convention, I guess?) is Rick Santorum. I made this point already and Dave Weigel concurred. He's a "true conservative" and he looks like he'll "come in second" this year, which are both substantial advantages in the Republican race.

Maybe it's Marco Rubio if Romney makes him the running mate, but the GOP does not often nominate losing running mates, because why would you?

Is Paul Ryan, who frantically introduces numbers-laden fake-serious budgets every year, the future of the party? I happen to think he's basically a bland weenie who only excites people predisposed to thrill to rich-on-poor economic warefare, but a not insubstantial portion of the Republican Party "elite" seems to like that sort of thing. Mitch Daniels is somehow even less electrifying, but as a governor he has a better shot than Rep. Ryan. And Santorum still seems to have a massive advantage over them all.

(Oh, what about Chris Christie? Yes, well, he'd certainly be fun but he is pretty moderate for the national Republican Party, even if he masks it by being an obnoxious, belligerent bully. And he is woefully unprepared to protect us from CREEPING SHARIAH.)

One guy changes this calculus, obviously: Jeb Bush, because the Bush name exerts some sort of weird hypnotic power over the Republican Party, and they are often forced to do their bidding, even when, afterward, they all regret it. I like to imagine that the nation as a whole has decided that it's done with Bushes forever, but that is pretty naive. I mean, Nixon got elected twice. Jeb Bush has not actually held office in a while -- by 2016 he'll have been a regular private citizen for nearly a decade -- and it's possible the family has decided to wait for George P. Bush to come of age before reasserting their claim over the White House (oh man, guys, he just turned 35).

The sick need to treat politics like it's fantasy baseball ensures that there's absolutely nothing anyone can do to make people not wildly speculate as to what will happen years after an election that is still months away, so I just encourage you to be sensible and responsible about it. (Like, it won't be Rand Paul.)