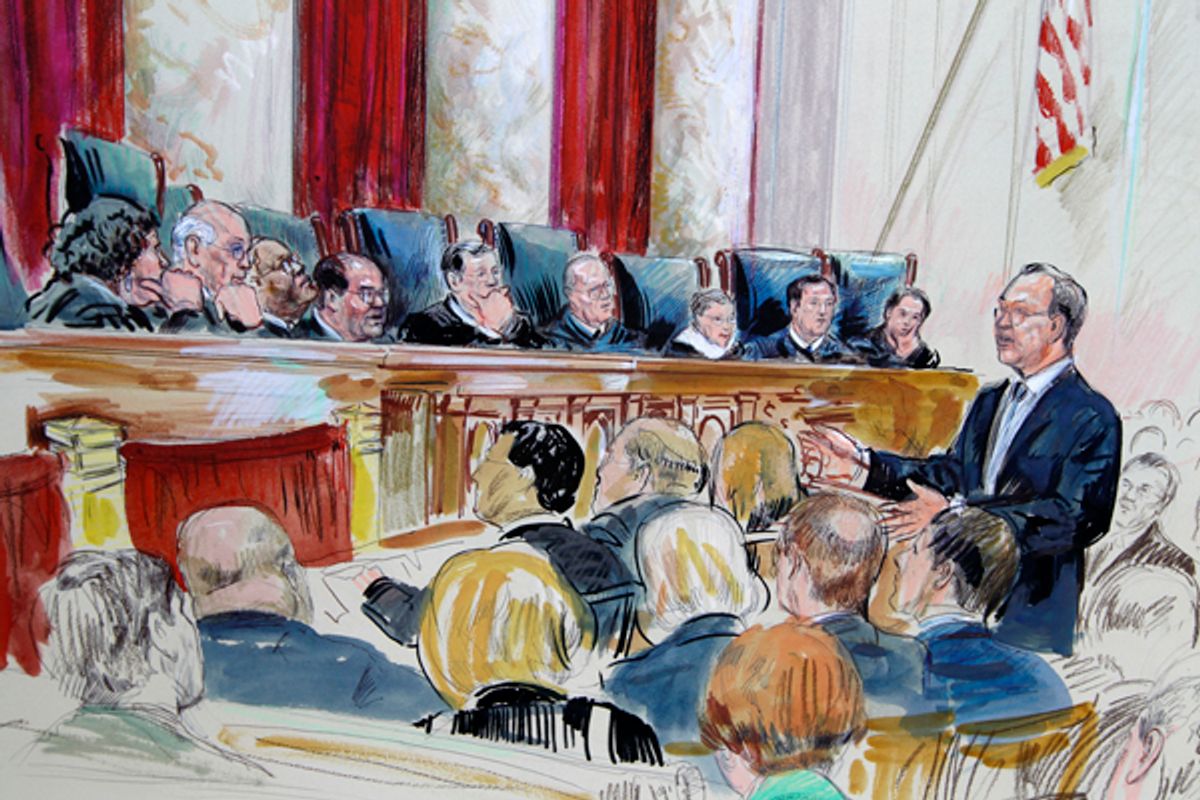 Paul Clement speaks in front of the Supreme Court in Washington on Tuesday, as the court continued hearing arguments on the health care law. (AP/Dana Verkouteren)
--

The long-awaited oral argument on the merits in the challenge to the Affordable Care Act makes depressing reading, because so many judges seem to be ready to buy such silly arguments – arguments whose silliness was pointed out on the spot, sometimes even conceded by the challengers, but which nonetheless seemed to sometimes move Chief Justice John Roberts and Justices Anthony Kennedy, Antonin Scalia and Samuel Alito. (Justice Thomas, who characteristically didn’t say a word, is a sure vote to strike down the law.)

A lot of arguments have been made against the mandate, but we can roughly group them into two broad categories, which I’ll call 1) No Limits and 2) I Am a Rock.  No Limits claims that if the mandate is permitted, there will be no limitations on federal power. I Am a Rock claims that people have a constitutional right to some safe harbor where they and (more important) their money are immune from all federal regulation.

The No Limits argument was succinctly stated by Justice Kennedy:  “Can you create commerce in order to regulate it?” He worried that “this is a step beyond what our cases have allowed, the affirmative duty to act to go into commerce.”  Roberts worried that government could force you to buy a cellphone; Alito, burial services; Scalia, broccoli.

But there already is a pretty big limit on the commerce power:  United States v. Lopez, a well-known 1995 decision that invalidated a federal ban on handgun possession near schools. Justice Breyer nicely summarized its holding: “Congress cannot get into local affairs, particularly where they are noncommercial.” With that decision on the books, the No Limits argument is like saying that unless you buy my rickshaw, you will have no way to move from place to place. You have legs.  Everyone can see them. Lopez placed limits on federal power.  Everyone can see them. The claim that there will now be no limits is weird. It denies the existence of what is there in plain sight.

When Breyer raised this obvious objection, attorney Paul Clement responded: “Lopez is a limit on the affirmative exercise of people who are already in commerce. The question is, is there any other limit to people who aren’t in commerce?”  This is like saying, “Yes, I know you have legs, but you still won’t be able to move from place to place unless you buy the rickshaw!” Clement admitted that Lopez is already a limit on federal power. He’d just like the Court to create another one. And the new limit would really be much less important than the old one. He told Breyer, a few moments earlier, that the framers weren’t apprehensive about the breadth of the commerce power “because it’s a power that only operated once people were already in commerce.” But most of what we do is in commerce. We can’t realistically avoid having jobs and buying things. If the only way for me to avoid federal power is to live in the woods and eat berries, then that’s not much of a limit.

The I Am a Rock argument says that if I’m not actively engaged in interstate commerce, I’m somehow immune from federal regulation. Justice Kennedy was troubled that the mandate “requires the individual to do an affirmative act,” and “that changes the relationship of the federal government to the individual in the very fundamental way.” But Paul Simon’s lyric was intentionally ironic, because he knew that Donne was right: No man is an island. The notion that there is some corner where I can go and hide with my money, free from any obligations to anyone else, ignores the fact that the political and economic structure is what made it possible for me to have that money in the first place.

Alito thought it somehow unjust to regulate “somebody who is doing absolutely nothing about health care” by “requiring them to subsidize services that will be received by somebody else.”  Justice Ginsburg responded: “If you’re going to have insurance, that’s how insurance works.”  More important, that’s how any economy that is not pure, brutal laissez-faire works. If pre-tax income is deemed somehow sacrosanct, and no redistribution of it is legitimate, then it is even illegitimate for the government to act to prevent outright starvation, because the people paying for the food are not the ones eating it.

Some arguments partake of both. Thus, Scalia helped himself to the famous Broccoli Objection: “Everybody is in the market; therefore, you can make people buy broccoli.” This purports to be about limited federal power, but of course there’s no broccoli exception to congressional power. The presumption is that there’s some Tower of Saruman where the individual can shield himself from government compulsion.

What Solicitor General Donald Verrilli evidently could not bring himself to say – and this may be why his answers to No Limits were so tangled and hard to follow -- is that there is no such safe harbor. Government already forces you to buy insurance you may not want, and thereby to subsidize others, via Social Security and Medicare. The check on the abuse of this power is a familiar one: the ballot box. George W. Bush’s failed Social Security privatization scheme tried to greatly reduce this cross-subsidization. Had he succeeded, the poorest old people, who have only Social Security to support them, would have gone from watch-your-pennies poverty to grinding, desperate poverty, just above the level of homelessness and starvation. Evidently the electorate didn’t regard it as a cruel injustice for the strong and rich to help support the weak and poor.

Once you admit that government has a general power of taxation and can spend for the general welfare – and the Constitution does expressly say both those things – then there really is no limit on its powers of redistribution. The hapless Verrilli said that he was not justifying “forced purchases of commodities for the purpose of stimulating demand,” but of course that happens whenever anything is subsidized, or whenever government purchases a lot of anything. Have you ever heard of the defense industry?

For that reason, the challenge to the mandate is weirdly formalistic. Justice Kennedy got this when he observed that Congress could have provided a single-payer healthcare system with the taxing power. “In the one sense, it can be argued that this is what the government is doing; it ought to be honest about the power that it’s using and use the correct power. On the other hand, it means that since ... Congress can do it anyway, we give a certain amount of latitude. I’m not sure which ... way the argument goes.”  Kennedy here seems to be toying inarticulately with the idea that Congress can’t do indirectly what it can do directly. But it’s hard to see why that would be so. (He also understood that the need for cross-subsidization is more powerful in the insurance industry than in any other industry. It’s a mistake to confidently count him as a vote against the mandate.)

The weird formalism of the challenge was brought out in a different way by Justice Sotomayor, who observed that the functional equivalent of the mandate would be a health tax imposed on everyone, with a credit for those who carried insurance. Clement thought there might be some limitation on that, but such credits are ubiquitous in the tax code.

A last purported limitation -- a sort of I Am a Rock on steroids -- came from Justice Scalia. Perhaps he was just being a devil’s advocate, but let’s be clear: That’s who he was advocating for. When Verrilli pointed out that we all pay for the uninsured because we’re obligated to care for them when they get sick, Scalia replied: “Well, don’t obligate yourself to that.” Verrilli replied that the Constitution did not “forbid Congress from taking into account this deeply embedded social norm.” A bit later, Scalia suggested that under the Constitution, “the people were left to decide whether they want to buy insurance or not.” He later suggested again that the problem could be solved by not requiring insurance companies to sell affordable insurance to people with preexisting conditions. Here the purported champion of judicial restraint proposes reading brutal, unregulated capitalism into the Constitution. Fundamental rights are violated if government acts to keep sick people alive?  The other objections to the law are merely confused. This one is evil.