Her breakup, my heartbreak

My daughter was so mature when her boyfriend ended things. Why was I the one freaking out? 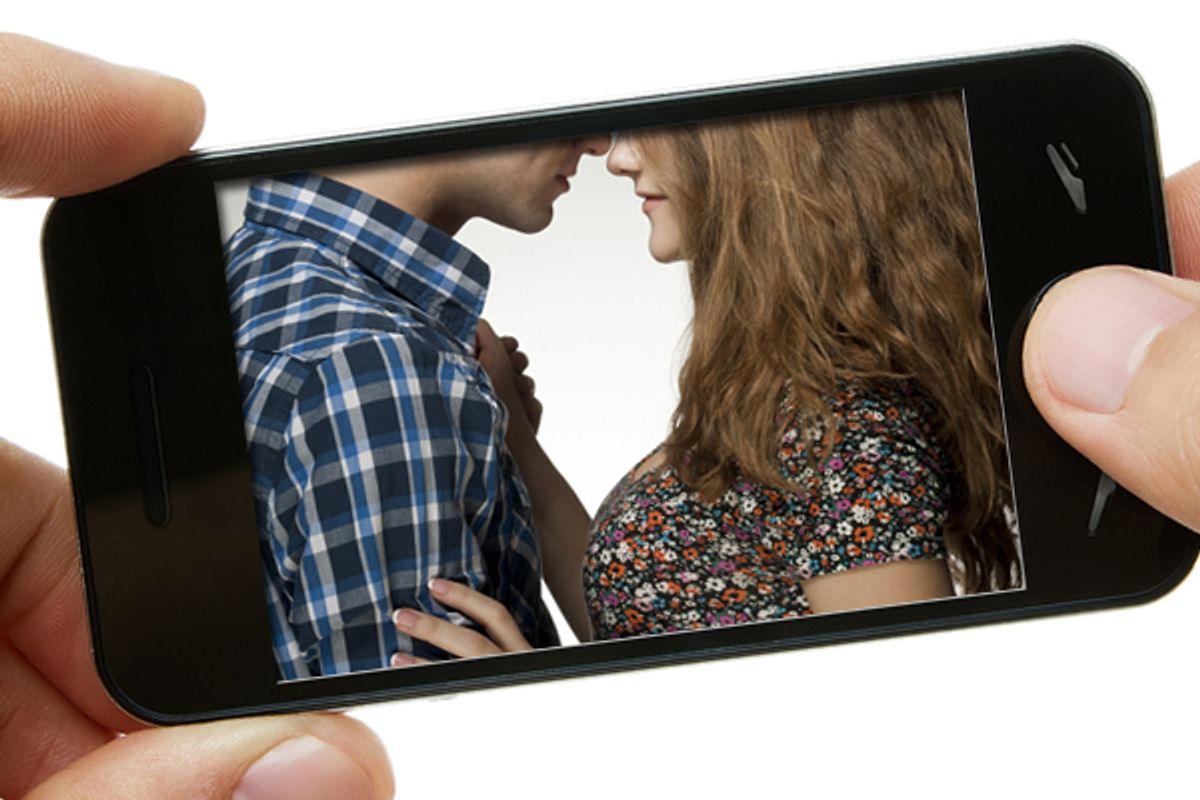 There was no way I was going to cry over his text. We barely knew each other. These long-distance things hardly ever work out anyway.

“I’m not sure how I feel about you anymore,” he wrote.

How could this be? A week earlier, he professed his love. He wanted to change his Facebook status to “in a relationship.” How did it go so wrong so fast?

More curiously, why was I feeling devastated by my 14-year-old daughter’s first breakup when she seemed unscathed by it? Katie replied to her new ex that these things happen and there were no hard feelings. I couldn’t move on so quickly.

“He’s not sure how he feels about you?!” I shouted. “You are smart, beautiful and kind. For God’s sake, you play piano for old folks at nursing homes and knit hats to support children in Africa! You’re borderline perfect. What’s he not sure of?”

Katie told me to take a deep breath. It would all be fine, she assured me. She explained that John was a nice guy whom she enjoyed getting to know, but ultimately they had very different interests. They lived on different coasts. It could never work.

I asked if Katie wanted to ease the heartbreak by cracking open a fresh pint of Chunky Monkey and playing an endless loop of Amy Winehouse. She did not. I offered a marathon of cheesy romantic comedies so we could sob together at all of the sappy bits, even though she didn’t seem very sad. She declined and said she had to finish her position paper for Junior Model United Nations. I stared at her, incredulous. Was she having no reaction to being text-dumped by her first boyfriend? Maybe she needed a maternal embrace to just let it all out.

In fact, I did. Katie told me that there would be other boys. “If he can’t see what a great mom I have, he’s not worth it,” she joked. Then, more seriously, she explained that this was not a rejection, but two people realizing that they aren’t right for each other.

I held her shoulders, examining my daughter at arm’s length. “Are you sure you’re 14?” I asked.

I felt a bit guilty that my protracted adolescence might force Katie, in response, to grow up too quickly. She may have felt that one of us had to be mature, and since I’m clearly not up to the task, it fell to her.

I wondered if I was cheating her out of something precious and irreplaceable by becoming too emotionally embroiled in her private life. Did my romance with her love life short-change her experience?

Later, I confessed all this to Katie, who told me that I mustn’t overthink things. She said she knows how to establish boundaries and she would certainly let me know if I’d crossed any. Katie returned to her homework; I turned back to my novel, the pink one with the cupcake on the cover.

I realize that becoming involved with my daughter’s love life is a somewhat pathetic attempt to dip myself into the Fountain of Youth. Because the reality is that being the mother of a teenager is a reality check, a constant reminder that I am no longer young, nor will I ever be again.

I miss the simpler life of my teen years when I’d spend hours on the phone twirling my hair around my finger and giggling about boys. (It’s not quite the same with graying hair.) I miss the days before my feet needed their own doctor. I miss the time when I truly believed anything was possible. Now, I’m not so sure it is. After 45 years of living, there has been too much disappointment. Hope is alive, but it’s taken a few hits and may be a little worse for wear.

As much as I admire Katie’s ability to feel whole outside the context of a romantic relationship, it poses a painfully stark contrast to who I was at her age. In fact, I’m not certain that I’ve come all that far. My need for validation is bottomless, and I am both astounded and grateful that I haven’t passed on this character defect to my child.

My husband of nearly 20 years tells me he loves me every day. William humors me by making grand Shakespearean-style proclamations of his affection. (Sometimes there is even a horn involved.) He has been known to playfully throw down his jacket to demonstrate his chivalry. It is a loving gesture with an added layer of meaning: Is this enough? Are we there yet?

Katie’s first boyfriend was special to me for several reasons. The two met at my 30-year summer camp reunion, the place where I shared my first kiss with Finn O’Lee under a crabapple tree near the playground. He had a mop of red hair and carried a basketball everywhere he went. It was true like.

Camp St. Regis closed in 1981, but the owners, the Kennedy family, kept their 15-bedroom home and a large waterfront lot in New York. Through the miracle of Facebook, a camp alumni group was started and plans for a summer reunion began.

At the event, the flag was lowered by two grandsons of the long-deceased “Papa Don” Kennedy, and the sun began to set on the bay. I’d spent 10 summers at Camp St. Regis and each sunset was a spectacular display of either fiery orange brushstrokes or sheets of pink cotton candy against the sky. This one topped them all.

An hour later, a bonfire was blazing and old friends were singing Simon and Garfunkel classics with the usual suspects strumming their guitars. I was chatting with my old friend John when our heads instinctively turned toward the grassy area leading to the beach. We saw two silhouettes, a girl and a boy sitting 4 feet apart, their backs toward the rest of us. The tension between them was palpable as they looked out toward the water.

“Who’s that girl with my son?” John asked, almost giddy.

When I told him it was Katie, he did a little gallop-in-place girly move, which I took to mean he approved. We wondered how long they’d been sitting there and noticed that they had inched closer. Soon they were sitting just close enough that their arm hair touched.

The youngest Kennedy grandson scurried to join us, and asked if John and I saw what was going on between our kids. We told him we had money on what time they would kiss. We had become helicopter cupids.

Ultimately, the mutual first kiss never happened, and I honestly don’t know which parent was more disappointed. The elder John managed to snap a photo with his cellphone, which was such low quality that it wound up looking like a sonogram of twins.

Katie and I returned home to San Diego, and the texting with young John continued for months. He added to his Facebook profile that one of his interests was waiting for Katie to return his texts. I thought that was the cutest thing I had ever heard. Katie shrugged and said she thought there were more direct ways to communicate that he wanted a quicker response. I looked at her like she was out of her mind. “Yeah, but none half as adorable!”

I collapsed in a sigh of exasperation. I had so much to teach this child. “We check out his page and see what’s he’s doing, where’s he’s been, what’s on his wall, whose wall he’s writing on,” I explained. She looked blankly. “We can see photos,” I said stressing the word to entice.

“This is really creepy, Mom.”

I chose to see it as investigative. Remembering that she had an interest in joining the CIA or FBI, I tried to show her the parallels between Googling boys and saving the world. She wasn’t buying it. She gave me some lame response about how if she wanted to know something about him, she would simply ask.

Days after the breakup, John and Katie were texting each other again. They were buddies now, and he told her he had a big date with a new girl. If his intent was to make her jealous, he missed the mark and instead hit me. Hard. “He has another girlfriend so soon?” I spat.

“Why not?” Katie shrugged. “She sounds like a nice girl. They seem well suited for each other.”

My love and admiration for Katie grew even more. I closed my eyes tight and I wished that she would never know heartbreak. I knew this was impossible, but in this moment, her life was perfect and I wanted to keep it this way for her.

Katie reminds me of the delicate glass Christmas tree ornament I am always terrified of breaking. It is a clear, paper-thin glass teardrop that catches the light and sparkles on our tree perfectly. Each year when I pack it up, I am always surprised and relieved that it hasn’t fallen.

John will probably always have a special place in Katie’s heart. He most definitely will have one in mine. He was the first boy with the good sense to adore my daughter.

Even in his breakup text, John acted with integrity. He didn’t lash out or get mean. He didn’t play games. He told her the truth and I respect him for the way he handled the relationship from start to finish. He was a sweet kid. I miss him already.

Jennifer Coburn is the author of four novels. She is currently working on a memoir about her travels with her daughter.