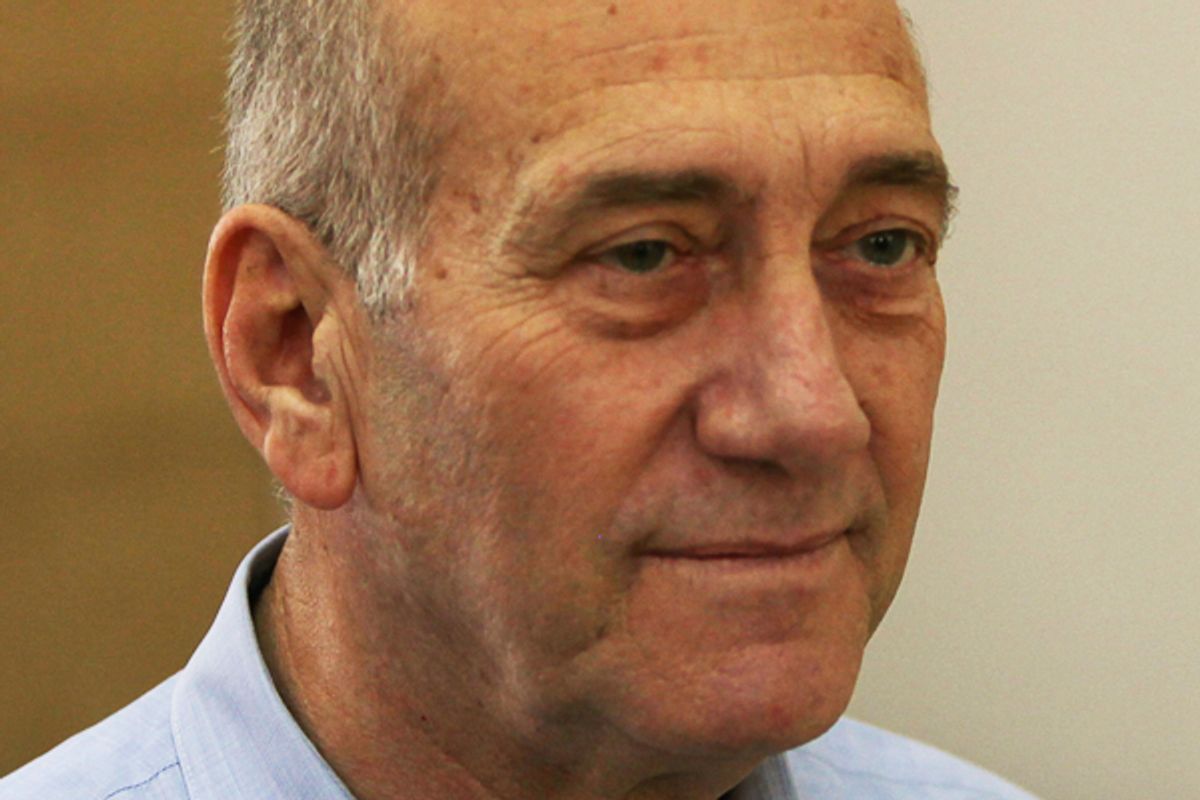 Former Israeli Prime Minister Ehud Olmert was nothing if not passionate in his speech at the J Street Gala Dinner on Monday evening. After asserting that Israel cannot tolerate a nuclear Iran, he argued vociferously that negotiations with the Palestinians over a two-state solution must continue, and that they must be successful. “Time is running out for us, not for them,” he exhorted the crowd. Olmert was speaking of the widely held fear that Jews in Israel will soon be outnumbered by the growing Arab population. At that point, Palestinians may simply abandon their desire for their own state and demand the right to vote in Israel proper. Such a reality would mean the end of a Jewish-majority state — in essence, the end of the Zionist dream.

Much of the J Street Conference — indeed, much of J Street, which touts itself as the liberal alternative to AIPAC — is based around this premise. In his recent book, "A New Voice for Israel," J Street president Jeremy Ben-Ami writes that “Israel finds itself at a critical fork in the road, facing a choice of existential proportion: Either end the Israeli-Palestinian conflict now through a two-state solution or cling to an untenable status quo that leads to the decline of its Jewish character, its democratic values and its international standing.” As Olmert told the Israeli newspaper Haaretz in 2007, "If the day comes when the two-state solution collapses, and we face a South African-style struggle for equal voting rights (also for the Palestinians in the territories), then, as soon as that happens, the State of Israel is finished." California Rep. Barbara Lee fretted on one panel at J Street that settlements are making the two-state solution problematic.

From this perspective, the main solution is for the Obama administration to put firmer pressure on Israel to make concessions for peace, and to renew the peace process that ends with a signed agreement creating  two states. Ben-Ami said he was hoping for a more proactive approach from Obama representatives Valerie Jarrett and Antony Blinken toward renewing the push for peace.

But another strain of thinking was present at the J Street Conference, one much more ominous for those hoping to see the Jewish state last another 64 years: It is already too late to salvage the two-state solution. That perspective was on display at a panel featuring Palestinian leader Mustafa Barghouti and Israeli academic and policy advisor Menachem Klein. Barghouti repeatedly used the word "apartheid" to describe Israel’s current reality. He would prefer, he said, another word to use, but apartheid is simply the most applicable. Israelis are hoping the Palestinians will be so miserable under perpetual occupation that they will simply emigrate, he said. But the growth rate will compensate for any emigration, and in any case, “Palestinians have nowhere else to go.” Barghouti has no hope that the U.S. will pressure Israel to forge a comprehensive peace. Instead, he said, the Palestinians and Israeli will simply go through the South African options before arriving at a one-state solution. “We will struggle until apartheid ends,” he said.

It was not only Palestinians who were sounding the death knell for the two-state solution. Menachem Klein focused the audience’s attention on a factor often overlooked: A civil war could erupt in Israel if the government did indeed agree to hand over the occupied territories to the Palestinians. “Yitzhak Rabin was assassinated during an interim agreement when he had not evacuated a single settlement,” he said. “Israelis will use arms to resist an agreement even if there were a referendum supporting it.”

But even as Barghouti and Klein were saying that the sun may have set on the two-state solution, fellow panelist Gershom Gorenberg, author of numerous books on Israeli struggles, was urging hope. “If you had said in 1977 that there would be gay marriage and a black president, you would have been told to up your medication,” he said. "Quit saying what you can't do, and go ahead and do it!" The crowd erupted in furious applause. Even as they doubted the future of peaceful coexistence between Israel and the Palestinians, the audience clearly hoped that America may yet play the decisive role in forging a Middle East peace.