White women have names in a scene from "The Five Year Engagement." The Asians are "this Korean" and "that Korean" 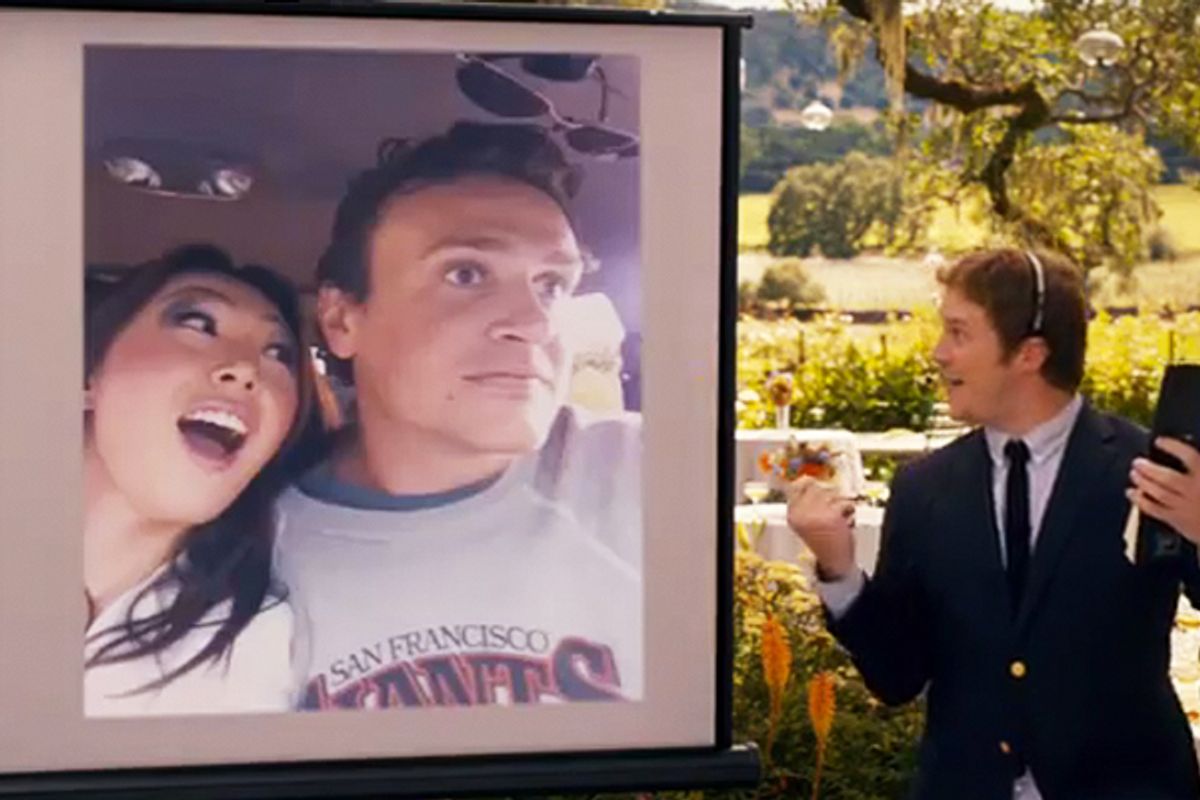 Hollywood's long-standing and embarrassing tradition of cruel Asian stereotypes probably hit its lowest point with Mickey Rooney, in terrible makeup and an exaggerated accent, playing Audrey Hepburn's neighbor in "Breakfast at Tiffany's." Any progress has been a sign of how far the movies had to come, but clearly growth has stalled; there's not much difference between Long Duk Dong in 1984's "Sixteen Candles" or Mr. Chow in "The Hangover" films.

The trailer for director Nicholas Stoller's "The Five Year Engagement," an April film starring Jason Segel and Emily Blunt, is just the latest example that Hollywood still thinks it is OK to make racist jokes when Asians are the target.

In a scene set at Segel and Blunt's engagement party, a friend ("Parks and Recreation's" Chris Pratt) sings along to a slide show of Segel's former girlfriends, set to the tune of Billy Joel's "We Didn't Start the Fire." The song's syncopation leads Pratt in a rapid-fire roll call of the exes' names. The white former girlfriends all have actual first names like Ana and Lizzy. Two Asian past loves are merely referred to as "This Korean" and "That Korean." To end the scene, the camera scans the partygoers, where an Asian woman (credited as "George's Girl") sits front and center completely unfazed, laughing even.

This Korean, that Korean? It would be easier to accept this as a colorblind joke if Hollywood wasn't so consistently blind to the way it portrays Asians. There's still a tacit rule that it is OK to mock people of Asian descent on film. Just imagine the political consequences of swapping "This Korean" for "This Mexican" or "This African." It wouldn't -- and shouldn't -- be done. Why, then, do we laugh when Jason Segel's Asian conquests are referred to by race?

In previous films, the team of Stoller, Segel and producer Judd Apatow has been able to tease out nuance in coming-of-age, sex and romantic-comedy genres. So why inculde these trite stereotypes and resort to a joke that fecklessly recycles a racialized trope about 1) indistinguishable Asian faces and identities, 2) the abundant sexual availability of Asian women and 3) the anonymity of Asians within a white context, sexual or otherwise. If the filmmakers are going to racially and ethnically identify these women in the slideshow for the purpose of eliciting laughs, then they technically threw out that first mythical "race card."

Race plays a very important role in comedy, and comedy has been a space where racism has been dissected and explored in very revolutionary ways by a wide spectrum of comics (Dave Chappelle, Louis C.K., Margaret Cho), particularly in light of historical degradation of people of color as a source of humor in entertainment. Being comedic in nature doesn't absolve a lack of critical thinking, social consciousness or originality, even when it comes to a complex, "heavy" issue like race.

And race likely isn't a thematic element in this film. Which makes it so disappointing that the trailer's use of this joke and its omission of the film's Asian-American cast members -- "The Office's" Mindy Kaling and Randall Park (who I pray has a less stereotypical role than his character's name, Ming, suggests) -- raised these red flags for a comedy that might otherwise be sharp. We've seen what kind of light a racially offensive trailer can cast on a film overall, such as the case of 2009's "The Goods: Live Hard, Sell Hard," a tepidly received comedy that became best known for a preview that included the racial profiling and beating of an Asian-American man.

Here's the irony: The writers of "The Five Year Engagement" can clearly handle cultural humor, as displayed later in the trailer when Segel jokes about his laxness with his Jewish faith. Within the span of a few seconds, there's a fully developed joke that doesn't use the culture -- or a physical representative of the culture -- as the punch line. It can be done. Just evidently not when Asians are the joke's target.

Sylvie Kim is a contributing editor at Hyphen magazine and blogger for SF Weekly's The Exhibitionist blog.