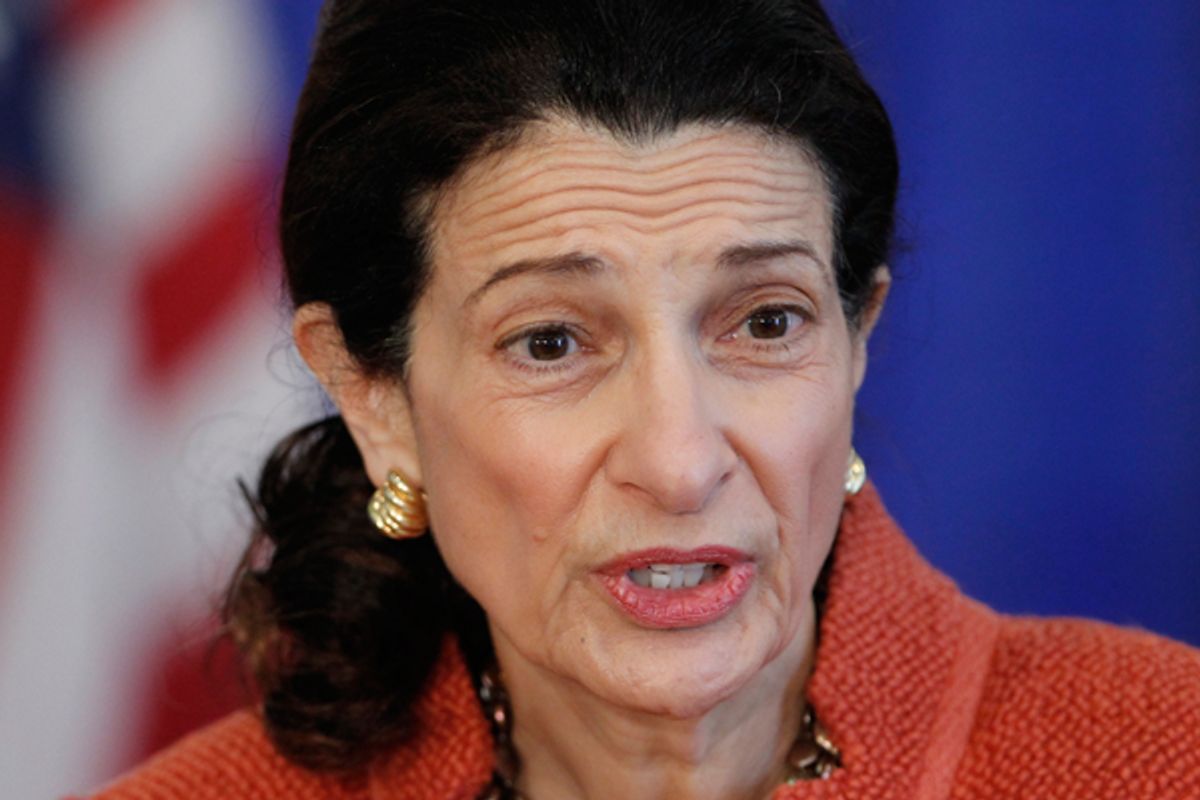 Retiring Sen. Olympia Snowe has finished grading the president's report card. President Obama gets an "F" in bipartisanship, where "bipartisanship" is defined as "constantly stroking the fragile egos of self-important Senate moderates."

Snowe is not seeking reelection because the Republican Party wholly merged with the conservative movement and then began enforcing much stricter party discipline than it had in the past, and she would likely lose a primary election to a more right-wing candidate. But in her high-minded version of what happened, she is leaving because of "partisanship," an evil spell cast on the formerly fraternal and cooperative United States Senate by comity-hating wizards.

This is how bad things have gotten: President Obama hasn't called her in almost two years!

If there were ever a Republican for President Obama to work with, it was Maine Senator Olympia Snowe. She was one of just three Republicans in the entire Congress to vote for his economic stimulus plan in 2009 and even tried to work with him on health care, but in an interview with ABC's senior political correspondent Jonathan Karl, Snowe makes a remarkable revelation: She hasn't hasn't spoken to President Obama in nearly two years.

Snowe said that if she had to grade the President on his willingness to work with Republicans, he would "be close to failing on that point." In fact, Snowe, who was first elected to Congress in 1976, claims that her meetings with President Obama have been less frequent than with any other president.

That's so weird, that President Obama stopped talking to her around two years ago. I wonder what happened? That wizard probably got him, and now he hates bipartisanship. That is the only explanation I can think of for why Olympia Snowe -- a Republican the president could definitely try to work with! -- hasn't heard from Obama for around two years.

I mean, Snowe "even tried to work with him on health care." Hey, that was around two years ago, actually! How hard did she try, again? If I recall correctly, she intentionally delayed the process for months before finally voting against a plan she'd previously voted for, never making a single substantive criticism of the policy of the bill in the fear that her criticism would then be addressed by Democrats and she'd be forced to come up with a new reason to oppose the bill, because it turns out she didn't actually want to vote for healthcare reform, and she would not have supported any plan to expand coverage to all Americans, no matter how it worked.

So this is the problem. In the popular imagination, and in Barack Obama's naive pre-2010 fantasies, "bipartisanship" means "working together to accomplish things." In reality, in the Senate, it means "indulging moderates, forever." For Olympia Snowe, the act of calling Olympia Snowe is more important than the act of ... passing legislation to solve problems.

Snowe is now endorsing Scott Brown, saying Massachusetts residents should vote for him because he is another true believer in independent, party line-crossing bipartisanship. He even supports the Violence Against Women Act! (Why should Massachusetts residents vote for a Republican who is willing to cross party lines sometimes to vote for bills that every Democrat supports, instead of just voting for a Democrat whose support you won't have to just sort of guess at until he comes out and says it? Because "bipartisanship," that's why.) (And the fact that Brown supported allowing employers to deny contraception coverage -- a measure Snowe opposed -- while his opponents shared Snowe's position on the issue also doesn't matter, because being a Republican who sometimes bucks the party line to do the right thing is more Honorable than being a Democrat whose party line is already the right thing.)

Would Olympia Snowe have voted for cap-and-trade if the president had called her more often? Or would she have done exactly what she did during the healthcare reform process, and strung Democrats along for months before voting against it for nakedly political reasons? (She was beginning to play the exact same game as she had before, saying she would maybe bring herself to support a "scaled-back" version of the legislation as long as other Republicans also promised to do so.)

Would Olympia Snowe have supported the "scaled-back," less ambitious alternative to comprehensive immigration reform that was the DREAM Act, which would have allowed people who came to the U.S. as children and served in the military or went to college to seek citizenship legally? No, she would not have, because if the act had passed, "millions of illegal immigrants could attempt to become legal residents...."

So instead of cap-and-trade, we got nothing. Instead of the DREAM Act, we got nothing. If healthcare reform had failed, we'd have nothing. If Snowe's stated goal was to maintain the status quo, because she doesn't care about immigration and doesn't believe in climate change, then she'd be totally doing a very good job. But she claims to care about climate change and want to do something about immigration, which leads me to believe that she's horrible at being a senator. It is the incompetent political maneuvering of "moderates" like Snowe, and not "partisanship," that leads directly to Senate inaction. If what she needed, in order to be swayed to the side of passing legislation to address problems, was for the president to make a much bigger public show of courting her, then she's a bizarre and repulsive specimen. Being against everything because people aren't paying you enough attention is so much worse than being against everything on principle.