Just as healthcare reform finally starts to work, the Supreme Court appears poised to destroy it 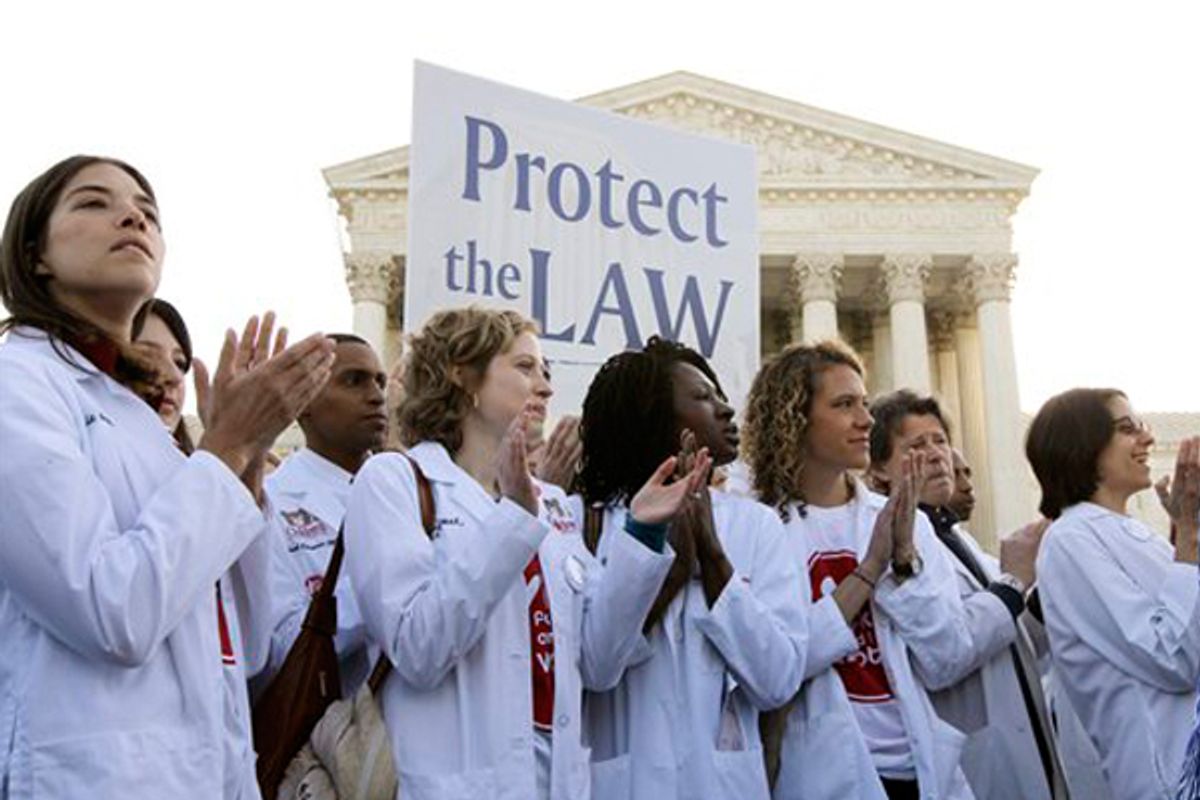 Mere seconds after reporters covering the Supreme Court's historic hearing on the healthcare reform law Tuesday morning were free to tweet, the panic started to spread: The harsh, pointed questions asked by a majority of the justices inspired a nearly unanimous insta-analysis: The Affordable Care Act is doomed. The mandate requiring that all Americans purchase health coverage is sure to be found unconstitutional.

Some caution is warranted: How the Court will ultimately rule is not yet set in stone. The questions asked don't always signify what action a justice will take, and all that is required is for just one conservative member of the court to join the four more liberal-minded justices for the law to survive. But for the moment, a sense of dismay is spreading quickly through the community of Obamacare supporters. Many sharp legal minds on the left believed that the Court was unlikely to strike down the mandate, to the point that one could almost smell the complacency. As of noon on Tuesday, that complacency is gone.

The timing could not possibly be worse. Even as polls continue to show that more Americans oppose the healthcare reform law than support it, two years after President Obama signed the Affordable Care Act into law, there is increasing evidence the measure has finally started to deliver some benefits.

In June 2011, 2.5 million more young adults had health insurance than in September 2010, a direct consequence of parents now being allowed to keep their children on their own healthcare insurance until age 26. Prescription drugs are more affordable for the elderly. Millions of Americans now have access to free preventive healthcare. Children with preexisting conditions can no longer be denied coverage.

But confirmation of perhaps the most important benefit of healthcare reform came just last week, in an article published in the New England Journal of Medicine investigating the reasons for the surprising slowdown in Medicare cost acceleration recorded over the last two years.

If there is one point on which budget wonks on both the left and right agree, it is that the long-term growth in Medicare costs poses by far the greatest threat to the finances of the U.S. government and the health of the American economy. If the trends in place over the last four decades continue indefinitely, Medicare spending will suck up every last cent of federal revenues by 2060.

But in the last two years, that trend line has changed significantly. Instead of growing faster than overall economic growth, Medicare spending is now roughly in line with existing growth. The Congressional Budget Office has sharply reduced its estimates for Medicare spending over the next 10 years. Part of the change is due to the recession; people have trimmed their spending on healthcare, along with everything else. But part of it is also due to the changes in how the healthcare industry operates that are a consequence of parts of the healthcare reform law that have not even been fully implemented.

The Affordable Care Act permanently slows the growth in Medicare payment rates for almost every category of provider other than physicians and makes additional targeted cuts to home health agencies and some other providers. As a result, the CBO projects that over the next decade Medicare spending per enrollee will grow substantially more slowly than the overall economy...

... In site visits and interviews conducted for our ongoing qualitative research, the Center for Studying Health System Change found strong provider interest in payment reform and efforts to prepare for it,with the prospect of increasing constraint on Medicare payment rates cited as motivation. We see a combination of reformed delivery of care and broader units of payment as having the potential to allow providers to generate savings through steps that are less threatening to quality of care and access than are cuts in payment rates.

(Emphasis mine). In other words, because the industry knows that that it won't be able to just hike up its prices at will in the future and still get reimbursed by the government, it is now looking hard for ways to cut costs. And that's really, really important. Slower growth in Medicare spending may not be as flashy an achievement as expanding coverage to 2.5 million youngsters or cutting prescription drug costs by $3 billion, but it is an absolutely crucial step toward bringing a halt to the unconstrained growth of federal healthcare spending.

Should the Supreme Court be considering such issues when deciding how to rule? By the letter of the law, probably not -- and there may not even be a direct connection between the individual mandate and the constraints on Medicare payment rates, unless the Court decides to strike down the entire law after finding the mandate unconstitutional. Perhaps a more interesting question is whether the polling numbers for Obamacare would improve if more people understood the long-term consequences of the law for the federal balance book. But that's not clear either. The latest New York Times poll shows that huge majorities of Americans support individual elements of Obamacare: 85 percent support requiring that insurance companies cover preexisting conditions. Seventy-seven percent support lowering prescription drug costs of the elderly. Sixty-eight percent support allowing parents to keep their children under their own coverage until age 26.

But at the same time, 51 percent oppose the mandate, an essential piece in ensuring that there is sufficient revenue to pay for all the other goodies. If you are looking for a perfect example of how modern Americans feel about government today, there you have it. We want services, but refuse to pay what they cost.

After a year in which the Obama administration seemed to have forgotten its most important legislative achievement, the White House is now making a new push to explain the benefits of reform and rally support. The political calculus is easy to understand. In a campaign during which Democrats will be attempting to paint the Republican nominee as a flag-bearer for the 1 percent, the benefits of healthcare reform for middle-class Americans struggling to pay up the bills should be relatively easy to point out. The irony, or tragedy, of this all is that this long-delayed resuscitation comes at a point at which the prospects that the law will survive its legal challenges have never seemed worse.