Watching the beach for debris from Japan

Items from Japan may be washing up on U.S. beaches. But to find some, prepare to pick through a lot of trash 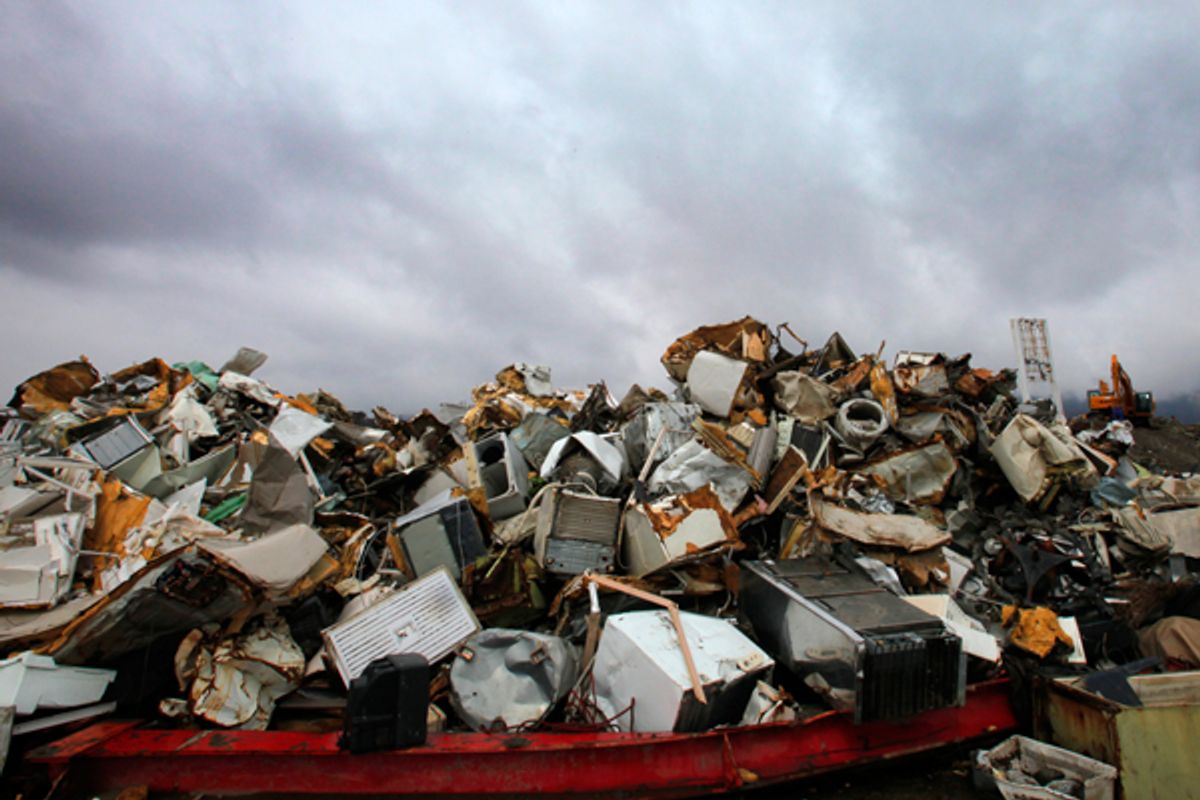 Debris left by the 2011 tsunami is piled up in Ofunato, Iwate Prefecture, northeastern Japan. Tsunami debris is now washing up on the West Coast of the U.S. (AP/Itsuo Inouye)
--

It was just garbage, most of it: crushed Pepsi cans, cigarette butts, stray bits of rope, old bottle caps swimming in a bed of wet sand. Ugly stuff, forgettable stuff: It was exactly the sort of no-account junk you’d expect to wash up at the “Dash for Trash or Treasure” beach cleanup culminating the recent weekend-long Ocean Shores Beachcombers Fun Fair, on Washington’s Pacific coast. But each time an earnest steward of our shorelines trundled out of the dunes with a sack full of it, Curtis Ebbesmeyer brightened with anticipation. And then the good oceanographer adjusted his thick leather work gloves and watched, hungrily, as the detritus was dumped down onto the folding wooden table that sat before him, in the breezeway outside the Ocean Shore Convention Center.

Ebbesmeyer sifted through the colorful piles. “Now this is interesting,” he said with curatorial precision. “Here’s a pretty good nose cone to a fireworks thing.”

Sift, sift, sift. An aluminum candy bar wrapper, some fishing net, a sandy AAA battery, some dental floss, a bit of Styrofoam cup. A volunteer stood at the end of the table, obligingly holding a trash barrel, and with an unceremonious flick of his forearm, Ebbesmeyer, who’s 69, and tall with glasses and a white beard, swept almost everything — over 99 percent of the even ton he examined that Sunday morning — into the waste stream. But even in the act of rejection, he was somehow benevolent, his movements schlumpy and lumbering, his commentary speckled with genial wisdoms. “Now this shotgun shell here would make an excellent science project,” he said. “Anyone want to do a science project on shotgun shells?”

In time, a woman approached with her iPhone, to show Ebbesmeyer a photo she’d taken of a shipwreck: a small piece of planked wooden boat painted red and half-buried in the Ocean Shores sand. She wanted to know if the boat was of Japanese provenance.

“Well, I’m not an expert on wooden boats,” said Ebbesmeyer, “but red is a very popular color in Japan.”

Based in Seattle, Ebbesmeyer is arguably the world’s foremost authority on flotsam. He is the author of the 2009 book "Flotsametrics and the Floating World," and also the man who named the Great Pacific Garbage Patch. He is not academic, but rather a freelancer who prefers to “teach to the public” by writing and publishing a quarterly newsletter, Beachcombers’ Alert! He was here, at his 20th consecutive fun fair, as beachcomber culture — often sleepy and preoccupied with conch shells — was enjoying a rare moment in the headlines. Debris unmoored by the March 2011 Tohuku tsunami, in Japan, is now floating across the Pacific, many tons of it. The National Oceanic and Atmospheric Administration projects that it won’t reach North America until 2013. But over 50 beachcombers from Humboldt County, Calif., to Kodiak, Alaska, have now claimed, with Ebbesmeyer’s fervent support, that they’ve already scooped the first arrivals off the sands. Mostly, we’re talking about oyster farm buoys, which sit high out of the water and thus sail fast. In his April Alert!, Ebbesmeyer says that, since October 2011, his readers have documented more than 400 buoys findings.

And several of these finds were sitting inside the Convention Center, amid 27 Fun Fair exhibition booths in the spacious Pacific Hall. They were ungainly things — hulking cylinders of white Styrofoam and black polyethylene, each one roughly the size of a garbage can. They were scuffed up and sandy, a vague affront to the lacquered driftwood artwork nearby. Still, on Saturday Ebbesmeyer lingered beside them, pointing out the white oysters crusting one buoy handle. “It doesn’t get much better than that,” he reveled. “Oysters don’t grow out in the middle of the ocean. They grow on the coast of Japan.”

The tsunami isn’t just a detective project for Ebbesmeyer, though. A few minutes later, speaking to a standing-room-only crowd of 100 in the Surf Meeting Room, he laid out a dire scenario, suggesting — in contrast to NOAA’s reassuring public pronouncements — that the tsunami debris may be radioactive. “There’s a chance that some of the buoys got mixed in with the ‘hot’ water,” he said. “If you’re looking at this debris, you should be wearing hand protection.” He went on to say that soon American shores would be awash with whole boats, and with intact Japanese houses, some of them perhaps even bearing street number signs. “We might have a hundred Japanese families coming over here to look for their belongings,” he said.

A collective gasp filled the room. This was all heady stuff for beachcombers, whose hobby first flourished back in the 1930s, when Americans began collecting globular glass fishing floats after they bobbed west from Japan. The first beachcombers fair took place in Seaside, Ore., in 1968, showcasing beach glass, furniture carved out of old ships' wheels, and messages in bottles.

Today, beachcombing has become an ever more diverse art. Con artists market fraudulent "beach glass" smoothed in rock tumblers, and in Ocean Shores, one woman was selling funky necklaces strung with plastic beach debris-sawed-off toothbrushes, for instance, and old toy tires. Still, the fairgoers were graying, largely, and many of the objects for sale were quaint and old-timey. One mature vendor was offering homemade birdhouses decorated with beach-gathered pinecones. The joys of beachcombing are quiet -- it's simply about searching for chance finds amid the soothing roar of the waves -- and the pastime is fading in today's Xbox nation. There are now only five annual beachcomber fairs in the U.S.

Still, as Ebbesmeyer sorted trash, kids caromed about him, drawn in somehow by his looming, galumphing presence. At one point, a small boy stepped toward his table with an elongated lime green can with unusual writing on it. “Is this from Japan?” he asked.

“Actually, I think it’s Russian,” Ebbesmeyer said, “but it’s a cool can.”

Ebbesmeyer sorted. A plastic fork, a rock, a small scrap of lumber. Eventually, he intimated that a second batch of tsunami debris was beginning to join the oyster buoys on American shores. Displayed at Ocean Shores were several large white plastic canisters bearing Japanese print. “At first,” Ebbesmeyer said, “I thought that they were gas cans. But there’s a young Japanese woman here and she told me that in Japan people keep cans of vinegar by their stoves. It makes sense — people eat a lot of fish in Japan. And when I opened one can, it did smell like vinegar. We’re going to watch these cans. We’re going to start tracking them.”

Bill Donahue has written for the New Yorker, New York Times Magazine, DoubleTake and Outside.