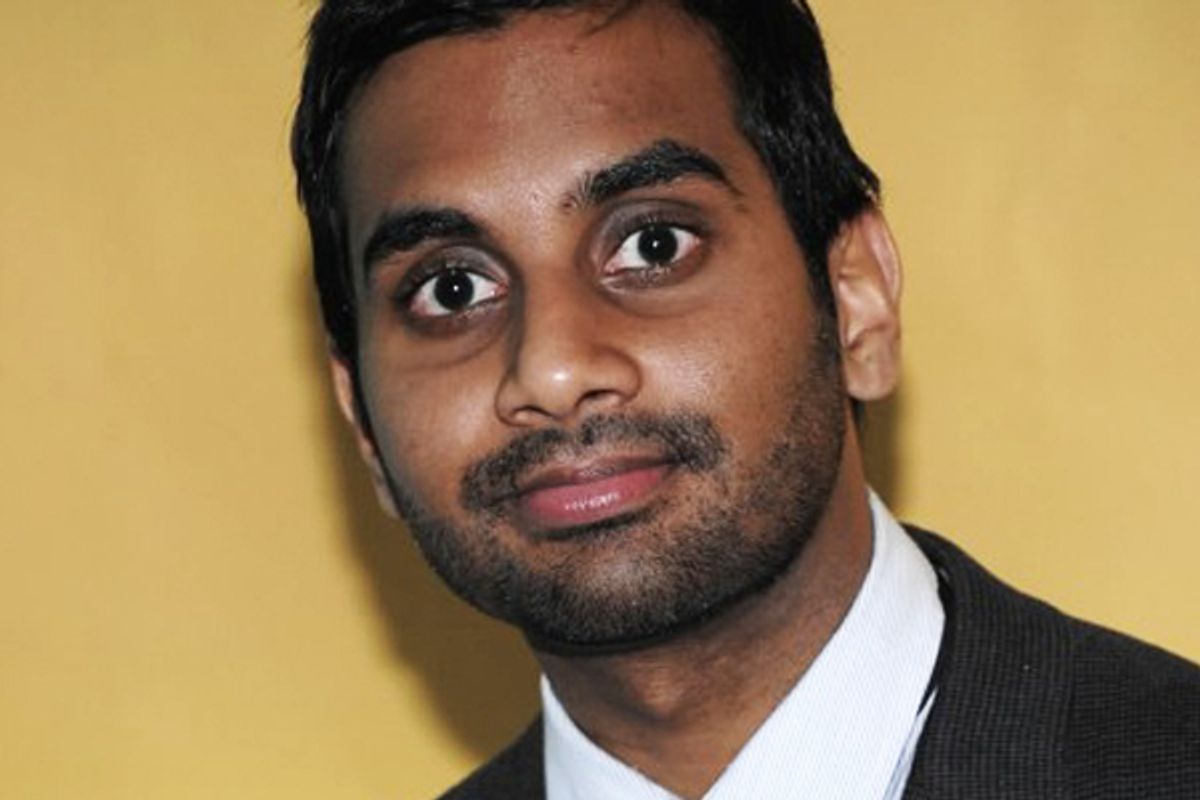 Aziz Ansari is in a rage. The taco place he went to for lunch is out of carne asada. “NOOOOOOO,” he tweets. He claims the actual “NOOOOO” started in real life, and you can almost hear his instantly recognizable (at least to most people under 30) anguish. With almost 2 million Twitter followers, Aziz Ansari is one of the most popular comedians on social media.

On it he disses Geraldo, thinks about which NBA players he looks like, and freaks out about hanging with President Obama. He’s also one of the most visible and successful comedians working today, splitting his time between playing the Ginuwine-loving office assistant Tom Haverford on NBC "Parks and Recreation" (which returns with new episodes April 19), roles in high-profile films like "30 Seconds or Less" and "Funny People," and writing and performing original stand-up across the country.

In his most recent comedy special, "Dangerously Delicious," he riffs on racial slurs and stupid people's children. But he's also trying out a radically new distribution model. By releasing the special through his personal website for $5 and forgoing the marketing offered by its airing on a network and subsequent release on DVD, he hopes to capitalize on his popularity on the Internet and help pioneer a new model for comedians to support themselves.

He spoke with Salon about his new special, meeting Obama, and why people shouldn’t take him too seriously.

You did an Obama fundraiser last week; what was that like?

That was super-fun. I spoke before the president and then he spoke later on, and he mentioned me, which was really crazy. And he told me about how his daughter watches "Parks and Recreation." I don’t think I’ve quite comprehended how crazy an experience it was to talk to the president.

How’d you get involved with Obama?

I eat a lot at the restaurant where the fundraiser was being held, and they were like, “Hey, we’re doing this event for Obama and we’re wondering whether you’d speak at it or host it,” and the Obama people called me and we set the whole thing up. To get to meet the president of the United States is still a pretty crazy idea to me.

I think of "Parks and Recreation" as, first, a comedy, and secondly, kind of a tribute to public workers who have to make do with limited resources and insane expectations of service.

I don’t know if we’re making any big commentary. It’s probably a better question for Greg Daniels or Mike Schur; they’re the smart guys who run that show. My character just runs around and sings songs and says a lot of things, but that’s more of a commentary on me and not the show.

Your character on "Parks and Rec" has been through a lot. He left to start his own business, then he came back, and now he’s with Anne, which seems like a little of a stretch for her. Where is the relationship going? Do you find it realistic or just a convention to keep the two characters occupied?

Think about all the relationships your friends are in. Do you ever think, “Oh, those people should be together”? No! There’s plenty of relationships that your friends get into where you’re like, “Oh my god, this is such a bad idea. Why are they dating? They’re always fighting. This is horrible.” I have friends like that where I’m like, “Why are they not breaking up!?” I think it’s a nice contrast to those other people that are paired up on the show, Adam and Amy’s characters, and Aubrey and Chris Pratt’s characters, they have soul-mate relationships. This is kind of a purely comedic relationship where it’s obvious that these two should not be together, that they’re horrible together. That’s kind of the point, comedy-wise.

Your comedy special is part of a new trend with comedians releasing their own specials. Why did you decide to go that route?

I recorded the special in June of last year, and I was trying to figure out how I wanted to release it. I knew I wanted to do it online because I saw how many views I was getting on YouTube versus how many DVDs I was selling. It was clear people were watching stuff online more. So I decided to pay for the special myself, fund the whole production and then try to figure out what way to release it.

In the middle of all this, I was hanging out with Louis C.K., and he was editing his special, and he told me what he was doing, which was releasing it online, and I was curious as to whether people would want to download a special like that. Whether people would get the same amount of exposure without a traditional marketing model. And it really worked, and people really embraced that kind of release, so immediately people asked whether I would do something similar. The response has been overwhelmingly positive, people telling me, “Oh, I’m so glad you’re doing this, I hope more comedians do it.”

Do you think more comedians are going to start releasing specials this way?

I don’t know. I wouldn’t be surprised if more people did it. I think Louis C.K.’s was an incredible success, and he’s an enormously successful comedian. I agree that you need a huge following already to assure that you will make all your money back. What will be interesting will be when someone who isn’t huge does something like this and it goes well. I’m sure that will happen at some point.

You went off on Geraldo last week ...

The thing I wrote was, “It's really appropriate to tweet this any day, but seriously -- Fuck you Geraldo.” And I just put it out there, and now there’s a thing in the Hollywood Reporter that says, “The Fox News commentator says Martin's killer should be prosecuted but that the victim's attire put him at fault, too. Aziz Ansari responds, "F--k you, Geraldo." I just can’t believe news sources are quoting dumb things I said on Twitter.

You talk a lot about race in your new special. You candidly discuss racial slurs and bigotry. It seems like you’re very aware of your audience and how they react to certain jokes. Are you ever worried about their response?

On the other end, I really don’t want to look in the audience and see someone who is way too psyched, because that would be scary.

You’re heading off on a new tour this summer?

Yeah, and it’s entirely new material that I think people will really be into. It’s called Buried Alive.