Can Obamacare be saved?

Maybe. But as conservative justices echo Michele Bachmann, Democrats' long-term plan should be Medicare for all 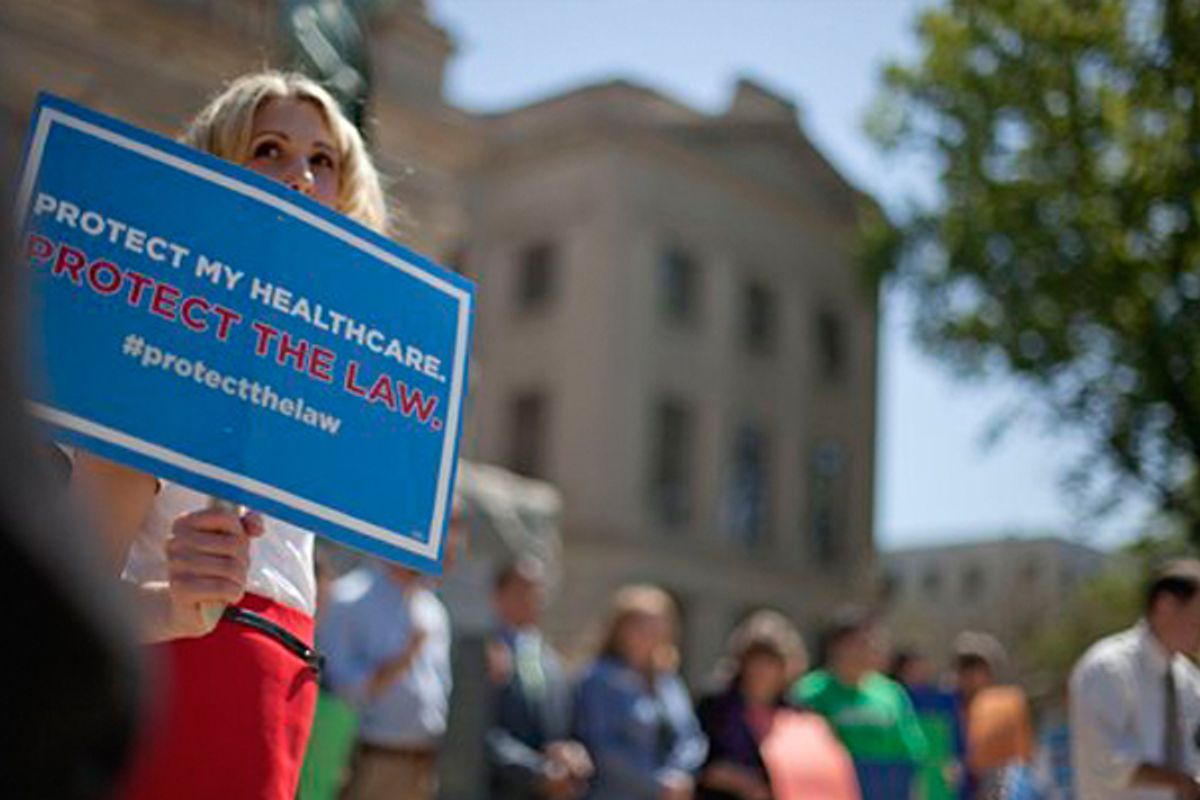 Nobody knows what the Supreme Court is going to decide about the Affordable Care Act. Reporters on the left and right have analyzed every justice's every word and every sigh. Some ACA partisans are panicking; some aren't. We'll know what they decide when they announce it, and not a moment earlier.

Is there anything to say before that? I was going to hold my tongue, until I heard Michele Bachmann compare the individual mandate to the government requiring you to buy broccoli or join a gym – and then heard some of the conservative justices echo the same lame talking points. The kind interpretation is that the justices don't know how the health care market works any better than most reporters do, so they're grasping for ways to understand it. The unkind interpretation is that the conservative intellectual machine that helped produce Antonin Scalia (a Federalist Society alum) churns out talking points that are now parroted not just by unblinking zealots like Bachmann, but at the highest level of government.

The other point the questioning made clear is that ironically, Democrats borrowed the most constitutionally questionable aspect of the ACA from Republicans. It's rich to hear the plaintiffs' attorneys object to throwing Americans into the rapacious insurance-industry maw. Folks on the left had the same objection when the law was being debated.

Now, the only thing more futile than predicting SCOTUS decisions is second-guessing political decisions that are behind us. The battles within the Democratic Party over ACA, particularly whether it should include a so-called "public option," were bitter and fairly futile. I was on the side of the public option – which I thought should have been called Medicare for All. But not one of us, on that side, ever convincingly sketched a route to the number of votes needed to make it law. There were a few etch-a-sketch routes, but no one ever showed conclusively, or even terribly persuasively, that anything more progressive than the existing bill could get through Congress.

That said, as the justices and others question the individual mandate, it's hard not to look back at how the ACA compromise came about. In today's questioning Justice Ruth Bader Ginsberg compared the controversy over the constitutionality of ACA to similar arguments about Social Security back in the 1930s. It's also comparable to the shrieking over Medicare in the '60s. The ACA differs, though, because it is requiring people to buy a product from a private business, which in many states enjoys near-monopoly status. (They can opt instead to pay a fine, and that option, according to some lines of SCOTUS questioning, may be what saves the mandate in court)

Remembering that the individual mandate came from the right – as an alternative to a government program, to protect the massive insurance industry – is just another reminder of how often Democrats sabotage themselves by moving to the middle, adopting Republicans' "compromise" positions, only to see them walk away from their own idea. Robert Reich says that happens time and again:

Because Republicans have mastered the art of political jujitsu. Their strategy has been to demonize government and seek to privatize everything that might otherwise be a public program financed by tax dollars (see Paul Ryan's plan for turning Medicare into vouchers). Then they go to court and argue that any mandatory purchase is unconstitutional because it exceeds the government's authority.

The individual mandate may survive anyway. In later questioning Justice Anthony Kennedy noted that the law doesn't actually force anyone into the health care market; because laws require hospitals to provide care regardless of ability to pay, the uninsured are "in the market" already and "creating a risk." No one can reliably predict how the court will come down on this question. What we do know is that a single payer system would stand up to constitutional scrutiny – the anti-ACA plaintiffs admitted as much – and save a lot of money. Progressives should use the fact that even conservatives don't want citizens forced into the rapacious insurance market to make the case that letting them buy into Medicare is more efficient and humane, as well as constitutional. And certainly if the individual mandate is declared unconstitutional, that has to be the new demand.

I talked about the ACA arguments today on MSNBC's "Politics Nation" with Rev. Al Sharpton and The New Republic's Jonathan Cohn.