He spent almost nothing in the South as his super PAC doled out millions. How outside money transformed the race 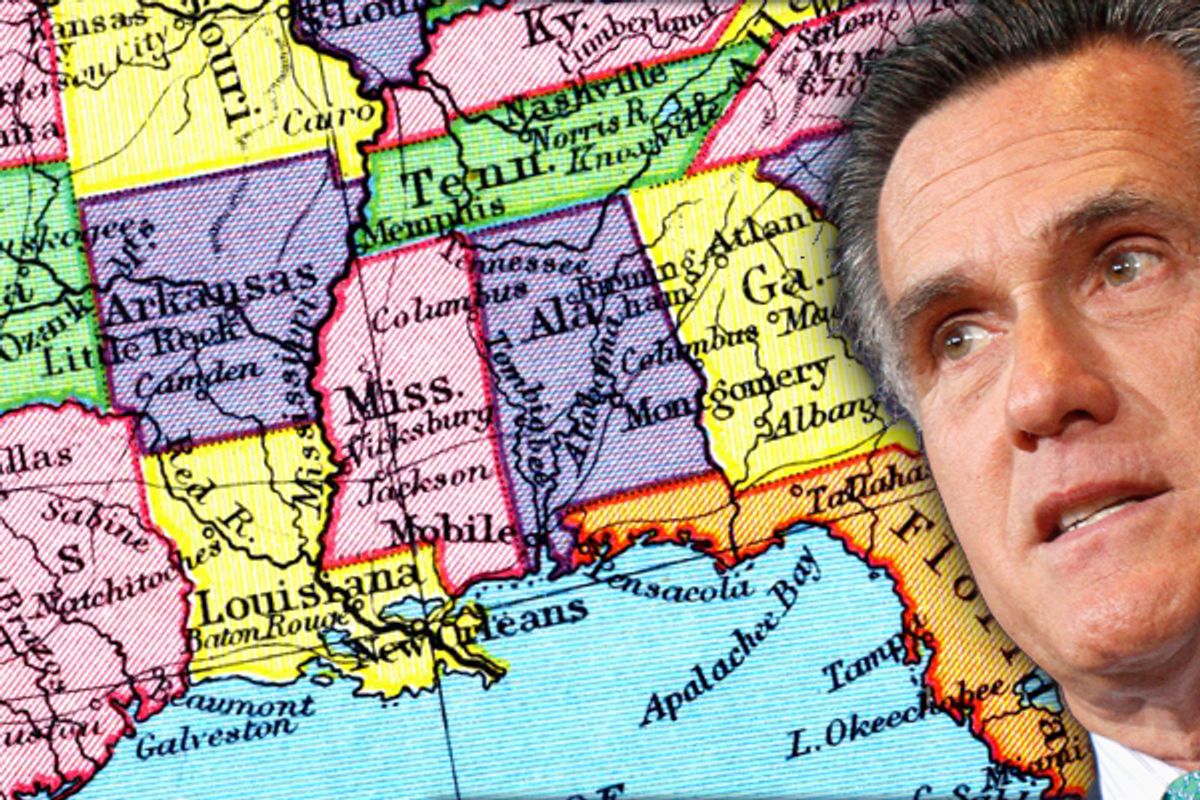 In the days before Super Tuesday, Eric Fehrnstrom, a senior aide to Mitt Romney, made an optimistic prediction about the Southern states where the former Massachusetts governor had been short on supporters.

"I don't know if we have any realistic expectation of beating Newt Gingrich in his own state," he told reporters traveling with the campaign. "I don't know if we can win Georgia or Tennessee. But I know we can take delegates out of there."

How, exactly, Romney’s campaign planned to capture those delegates was something of a mystery. Besides a modest Atlanta rally in early February, and a brunch held in Snellville the previous Sunday, Romney had spent scarcely any time in Georgia, and equally little time in Tennessee. His campaign didn’t pay for any TV presence in Tennessee before Super Tuesday, and the only ads of his that had run in Georgia were a result of earlier buys in South Carolina and Florida media markets that overlapped with parts of the state.

One pro-Romney group, however, had been active in those states — the super PAC Restore Our Future. It’s possible that Fehrnstrom was counting on the millions of dollars that the cash-flush organization had pumped into Georgia and Tennessee in previous weeks — in the form of phone banks, mailers, media buys and ad production in support of Romney and, to a greater extent, against his opponents — to buttress Romney’s near-absence in those states.

While federal law prohibits direct coordination between super PACs and campaigns, Restore Our Future has been closely attuned to Romney’s needs in the South. As Romney focused on other states, Restore Our Future was spending money to lay the groundwork in the South--a job that, once upon a time, would have consumed the Romney campaign's own time and resources. “This is clearly not being done by people who have absolutely no idea what the candidate or campaign is doing,” Lawrence Noble, former counsel for the Federal Election Commission and a campaign finance lawyer, said of Restore Our Future’s Southern spending. While their activity probably does not rise to the narrow definition of “coordination” prohibited by the FEC, he said, “It is very easy to imagine that [Restore Our Future] is intentionally filling in where it thinks its candidate can’t go.”

A comprehensive review of Restore Our Future’s FEC filings shows that this is exactly the pattern that has unfolded in Southern states as the primary season has dragged on. Restore Our Future has quietly and consistently spent millions in Southern primaries — Alabama, Mississippi, Georgia, Louisiana, Oklahoma and Tennessee — that most have called unwinnable for Romney and that Fehrnstrom has dismissed as “away games.” The result is that the Romney campaign could save its own funds for other states and downplay expectations — all while Restore Our Future waged a well-financed fight for Southern delegates.

Several Super Tuesday states fit this pattern. In Georgia, where Romney’s campaign produced no targeted ads, Restore Our Future spent more than $1.5 million on advertising against not just Newt Gingrich, the consistent favorite, but Rick Santorum as well — with two anti-Santorum ad buys costing the super PAC nearly half-a-million dollars each. In Tennessee, where a Washington Post analysis found that the Romney campaign did not buy a single TV ad, Restore Our Future spent almost another $1.5 million. And its spending exceeded $700,000 in Oklahoma — a state in which, again, Romney had not advertised, and that he had not visited since an October fundraiser. By comparison, Rick Santorum's affiliated super PAC, Red, White and Blue Fund, spent no more than $440,000 in any of these states.

Beyond Super Tuesday, Restore Our Future expended huge sums in Alabama, a state Romney first visited four days before the primary before adding another, last-minute appearance with comedian Jeff Foxworthy (his wife, Ann, was also dispatched to Montgomery, Huntsville and Birmingham). Restore Our Future spent nearly $2 million there, and another $1.2 million in Mississippi, in the month or so before their March 13 primaries. In Louisiana, which Romney visited just once, Restore Our Future spent approximately $740,000. Once again Romney’s campaign bought no airtime in Mississippi, save for what bled into the state from the Mobile, Ala., market; so far, the campaign has not reported spending any money on media in Louisiana. Restore Our Future, meanwhile, spent more than $7.5 million on these six contests — more than a fifth of its spending on media and voter outreach to date.

Even when Romney’s campaign does buy airtime, the expenditures of Restore Our Future tend to predate and far outstrip them. In Alabama, for instance, by the time Romney’s campaign began making modest TV buys in early March (outside of what had already penetrated the state as a result of advertising on the Florida panhandle), Restore Our Future had already spent nearly $900,000.

All this leads the respective media buys of Restore Our Future and Romney’s campaign to look awfully well planned. “They’re filling in the blanks, and they’re filling in the holes in the campaigns’ spending strategies,” said Fred Wertheimer, president of the campaign finance watchdog group Democracy 21. “This reflects the larger issue of coordination, in that super PACs are functioning as arms of the campaign.” Through a spokesperson, Restore Our Future declined to comment.

Restore Our Future’s strategy has proven costly. In some cases, the super PAC spent as much or more per Romney delegate than it did in states like Ohio or Michigan — where, although Romney and his supporting PACs were seen as struggling for a victory, they ultimately produced wins. For each of the 19 delegates Romney picked up in Georgia, it spent almost $80,000, same as in the more hotly contested Ohio. In Tennessee, it spent more than $90,000; in Mississippi, $100,000; in Louisiana, where he picked up just five delegates to Santorum’s 10, more than $140,000. Alabama’s measly 11 delegates cost Restore Our Future $180,000 apiece — on par with what it spent for each delegate he picked up in Michigan.

Comparisons between the weeks of intense outside spending and poll numbers also show Romney making only modest gains, and his opponents taking only modest hits. For all of the ads, phone banks and mailers Restore Our Future overwhelmed voters with, in these six primaries Romney secured less than a third of the delegates awarded.

Of course, it is hard to assess how much more poorly Romney would have performed in Southern states without Restore Our Future’s assistance. Ever since his candidacy hit turbulence, Romney and his campaign aides have consistently said that they are playing a delegate game. It could be that the many millions his super PAC spent were critical to helping him salvage whatever delegates he could from these hostile contests — they constitute about 13 percent of his total delegate take to date. And it’s not as though Restore Our Future’s funds have taken a severe hit from these expenses. Nevertheless, if this was Romney’s Southern strategy, it proved to be a very expensive one.

Molly Redden is a reporter-researcher at The New Republic.