The delusion that sustains Newt

A normal candidate would drop out now. But a world-historical figure pivots to a “big choice convention” strategy 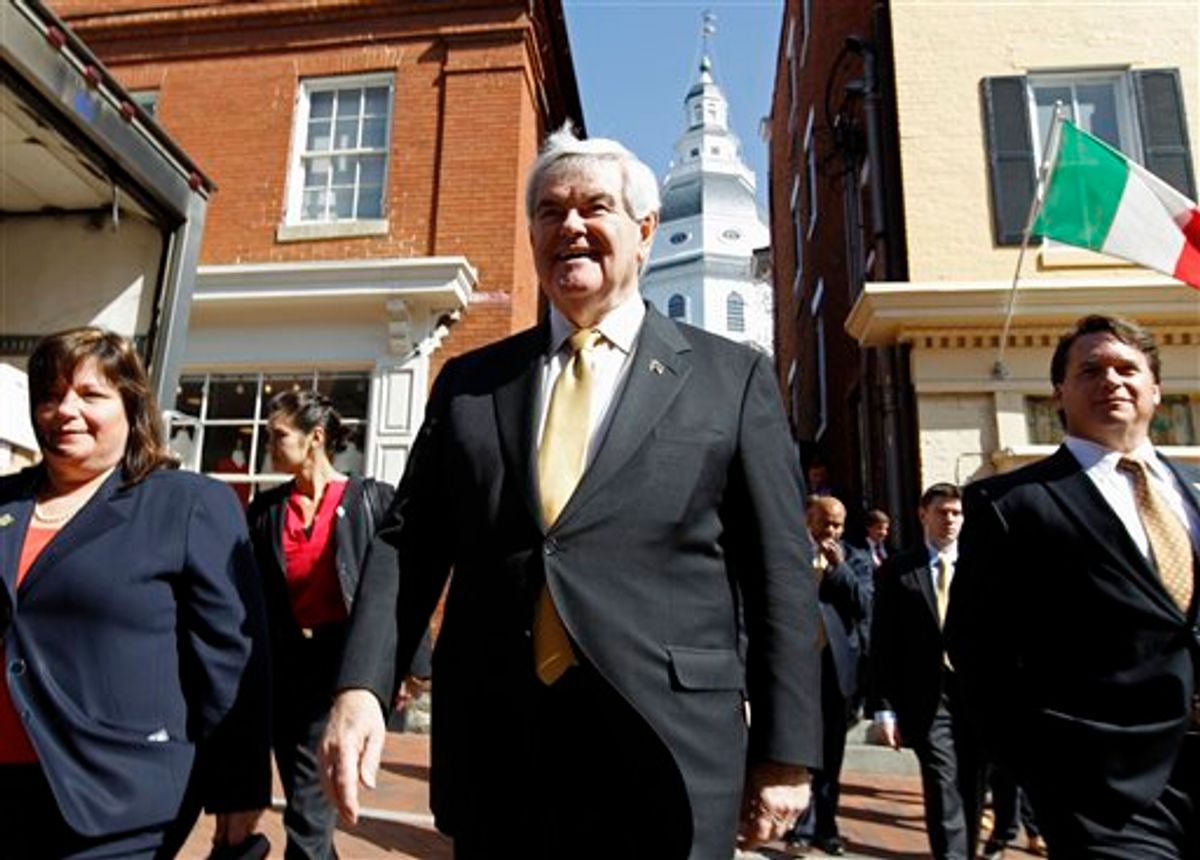 From a conventional standpoint, there’d be good a reason for Newt Gingrich to simply end his presidential campaign right now: It’s dead, with zero chance of another primary season revival.

Since falling short in Mississippi and Alabama earlier this month, the former speaker’s support, visibility and fundraising have eroded. He netted just 8 percent in the Illinois primary, good for fourth place there, and 15 percent in Louisiana last weekend, a significant decline from his performance in previous Southern states. A new CNN/ORC poll shows him running dead last nationally, behind even Ron Paul, with 60 percent of Republicans saying he should leave the race. And the newest numbers from Wisconsin – which votes next Tuesday – put Gingrich at a mere 5 percent.

Moreover, he’s been rapidly disappearing from the media’s coverage of the race, has taken on well over $1 million in debt, and has been reduced to charging supporters $50 for photographs with him.

But Gingrich, as you might have noticed, isn’t a conventional candidate. So the news this morning isn’t that he’s bowing out; it’s that he’s laying off some staff, cutting back on his travel schedule, and refocusing his campaign on what he’s dubbing a “big-choice convention” strategy. The idea, supposedly, is that Gingrich will spend the next few months courting delegates so that he can seize on a deadlocked convention scenario in Tampa this August.

It makes sense that he’d do it this way when you consider Gingrich’s aversion to admitting failure, his tendency to constantly see himself as the central player in a real-time political drama with epic historical significance, and the lessons he’s likely internalized from a campaign that saw him surge to the front of the GOP pack twice after being dismissed and ridiculed by the entire political world.

The deadlock scenario that Gingrich is banking on is a remote one. It depends first on Mitt Romney failing to secure the 1,144 delegates needed for a convention majority during the primary season. This alone isn’t very plausible anymore, with Romney – who has been winning delegates at a rate of about 55 percent – needing to win fewer than half of the delegates in the remaining contests to reach the threshold. Given the demographic patterns that are driving the GOP race, he’s well-positioned to do this.

And even if he’s somehow short when the primary season ends on June 26, Romney figures to be within a handful of the magic delegate  number – close enough that the GOP’s superdelegate equivalent, dozens of Republican National Committee members who are surely interested in avoiding a summer of intraparty war, would presumably put him over the top right away.

What Gingrich is doing, then, is accommodating a certain amount of reality without really acknowledging it. Pressing on with an active candidacy was getting ugly. The press was starting to ignore him and he was likely to finish as an asterisk in the coming contests. The bills were mounting too. This way, he saves some face and some money while still getting to insist that he’s a candidate for the nomination and that he’s simply pivoted to a new phase of his candidacy. He doesn’t have to tell his critics that they’re right and this it really is hopeless – at least not yet.

Plus, the idea of commanding a bloc of delegates at a truly open convention -- a suspenseful event that hasn’t occurred in decades, that would involve all sorts of unpredictable variables, and that would be remembered by political historians – really connects with Gingrich’s sense of his own place in history. Lately, he’s taken to expounding on how such a convention might play out:

I think we will then have one of the most interesting open conventions in American history. It'll be a 60-day dialogue on television, radio, the Internet, all the way up to Tampa. And the question that will be asked is, who can best beat Barack Obama? And at that point, I think most Republicans agree that I would probably do a better job debating Obama than any other candidate, and I think it becomes a very viable, lively campaign."

Again, it’s highly, highly likely there will be no suspense about the GOP nomination after June, and the issue might even be settled long before then. But it’s particularly easy for Gingrich to scoff at those who point this out because of what he’s already been through his campaign.

It was late last spring, don’t forget, that his entire campaign staff quit after an epically botched campaign rollout that, it was widely assumed, would serve as a humiliating end to Gingrich’s public career. Gingrich vowed then to stay in the race and run a different kind of campaign, and the laughter died down when he made a stunning surge to the top of national and key early state polls back in December.

At that point, Gingrich had hopes of serving as the consensus alternative to Romney for conservatives across the country. But devastating attacks from influential conservative leaders who feared his nomination and a barrage of negative ads from Romney and his super PAC allies popped the Gingrich bubble before Iowa. His hopes were reignited by a South Carolina triumph on January 21, but that also reawakened his enemies, who again marginalized him before the Florida primary.

Rick Santorum then took Gingrich’s place as Romney’s chief foe and began a string of victories and near-misses in the Great Plains and Midwest, with Gingrich left hoping his Georgia roots would provide for one more unlikely comeback when the race returned to Dixie. But his failure to beat Santorum in Mississippi and Alabama earlier this month signaled that he’d been marginalized for good.

At least that’s how everyone in the political world not named Newt Gingrich interpreted it. But good luck convincing the former speaker.