If the Supreme Court upholds healthcare reform, anti-choice activists are planning to protest it like Roe v. Wade 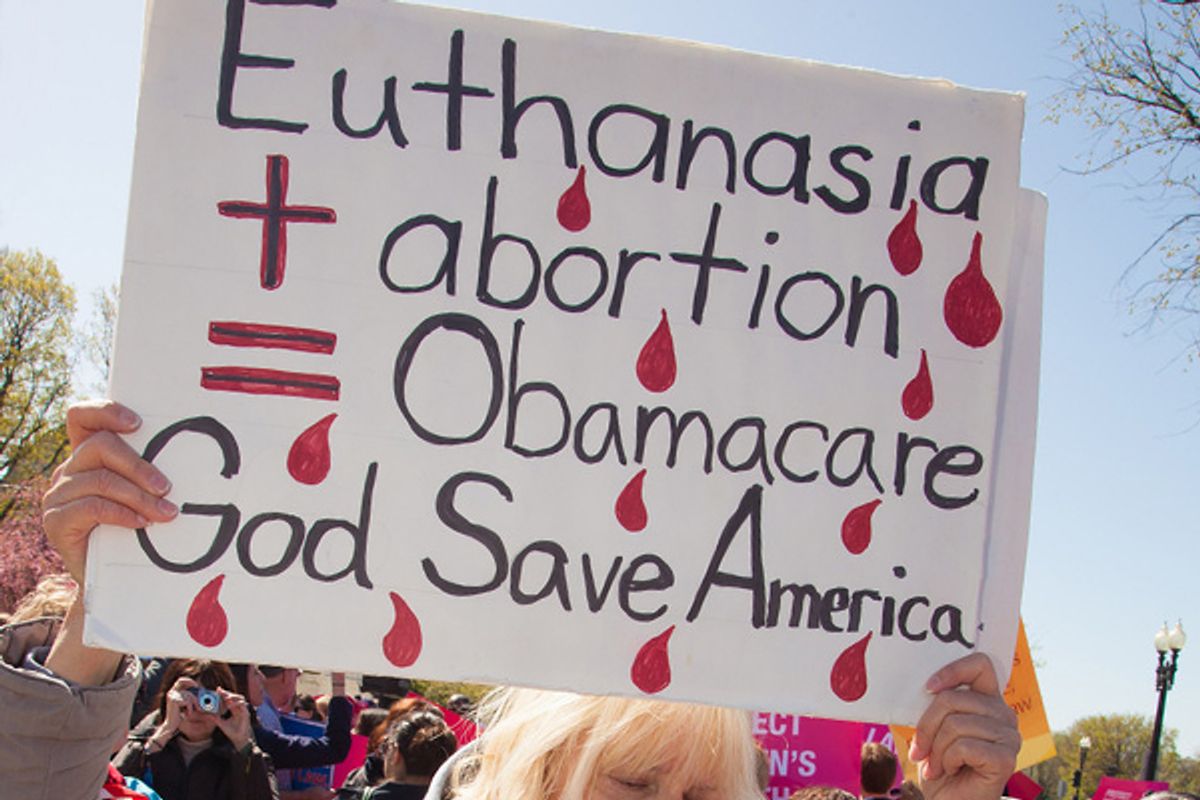 A woman protests outside the Supreme Court on Tuesday. (Jeff Malet/MaletPhoto.com)
--

As activists with Tea Party Patriots and Americans for Prosperity rallied on the steps of the Supreme Court in opposition to the Affordable Care Act on Tuesday, another slice of the conservative movement was staking its own claim to the historic day. Anti-choice activist Lila Rose, founder of Live Action and best known for her deceptive undercover videos intended to bring down Planned Parenthood, declared Obamacare “our generation’s Roe v. Wade case.”

Even as liberals worry that the justices will strike down healthcare reform, conservatives like Rose are preparing to keep up the fight in case the Court upholds it. If Obamacare stands, she says activists will take to the streets, the courts, the voting booth and the halls of Congress much in the way they have fought legal abortion.

Rose’s invocation of Roe as a parable for Obamacare is emblematic of conservative confusion and hypocrisy when it comes to the law. Roe enshrined a woman’s right to be free from interference from the government in choosing an abortion — a medical procedure. Yet the right to be free from government “tyranny,” as Tea Party activists call it, is the same principle that animates conservative opposition to imagined “government bureaucrats” writing the rules on access to care. You wouldn’t want the government telling you what to do with your body, would you?

The one exception, of course, is the space between a woman's vagina and her ovaries.  Anti-choice activists, like conservatives broadly, argue the Affordable Care Act’s individual mandate is unconstitutional because it infringes on individual freedom to choose one's own healthcare, but women's reproductive care is another matter. It's not a coincidence that renewed conservative hostility to women's health has coincided with the movement's mobilization against Obama's healthcare reform. In the three years conservatives have been fighting against Obamacare, first in Congress and now in the courts, anti-choice activists also have been using the power of state legislatures to make it more arduous, more invasive and more humiliating to seek an abortion. Then there are the so-called Personhood laws, as well as a proposed federal law, heralded by conservatives as freedom-loving, that would grant equal protection rights under the 14th Amendment to the Constitution to fertilized eggs, thus elevating the freedom of a zygote above that of a woman.

Much of this energy has come as a result of opposition to Obamacare, which, the anti-choice movement claims, contrary to reality, is a huge expansion of abortion rights. Ellen Staniszewski, a demonstrator outside the Supreme Court on Tuesday, believed “because I’ve read the whole law” that “death panels” will result in more abortions. That’s because — being death panels, after all — she believed imaginary grim reapers masquerading as bureaucrats would order women to have abortions rather than carry a pregnancy to term.

Obamacare, claims Americans United for Life president Charmaine Yoest, is “the largest expansion of abortion since Roe v. Wade.” Why? Because, Yoest argues, insurance plans that cover abortion will be permitted to participate in the federally subsidized insurance exchanges, assuming it’s permitted under state law. Never mind that women receiving subsidies would have to pay a separate premium for abortion coverage out of their own pockets. Because such insurers must, under the law, assess a $1 per month surcharge on all enrollees in the plan, Rep. Chris Smith, R-N.J., and anti-choice activists complain that this constitutes taxpayer funding for abortion.

In fact, this dual-payment system was designed to ensure that no taxpayer funds were used to cover abortion. “To really ensure private funds are dedicated to abortion coverage, the insurers are not allowed to take into account the cost savings of abortion and must assess a minimum of $1 for the abortion premium,” says Jessica Arons, director of Women's Health and Rights Program at the Center for American Progress. “So it’s actually a ‘protection’ against taxpayer funding of abortion. It just shows once again that you can never satisfy the anti-choice movement.”

Yet for Staniszewski, who regularly demonstrates outside of a suburban Washington abortion clinic as part of the 40 Days for Life movement, Obamacare may be more important than Roe, because it “not only funds abortion but pushes abortion.”

The contraception coverage requirement, Staniszewski told me, turning the language the pro-choice movement has used on its head, is a “war against women.” The coverage of contraception, she said, detailing yet another bizarre, conspiratorial scenario, “will make our young ladies and young boys — it will turn them into animal sex objects if you tell them if they can have free contraception in the first, second and third grade, they’re going to be having sex early on, ‘til they’re going to be covered in sexually transmitted diseases, until they have abortion after abortion, until they no longer have any respect for their own body and life.”

“This is a revolution,” Rose told an interviewer at the “Stand Up for Religious Freedom” rally outside the Department of Health and Human Services headquarters last week, one of 140 simultaneous demonstrations nationwide. “This is an act of tyranny by our government,” Rose insisted, vowing, “This is just the beginning. We will not comply.”

Even if the Court strikes down the individual mandate, activists won’t let up on this culture war for “freedom” from the government. In fact, they may be emboldened.

Staniszewski was straightforward about why. The government, she maintained, shouldn’t get to make decisions that “should only belong to God.”