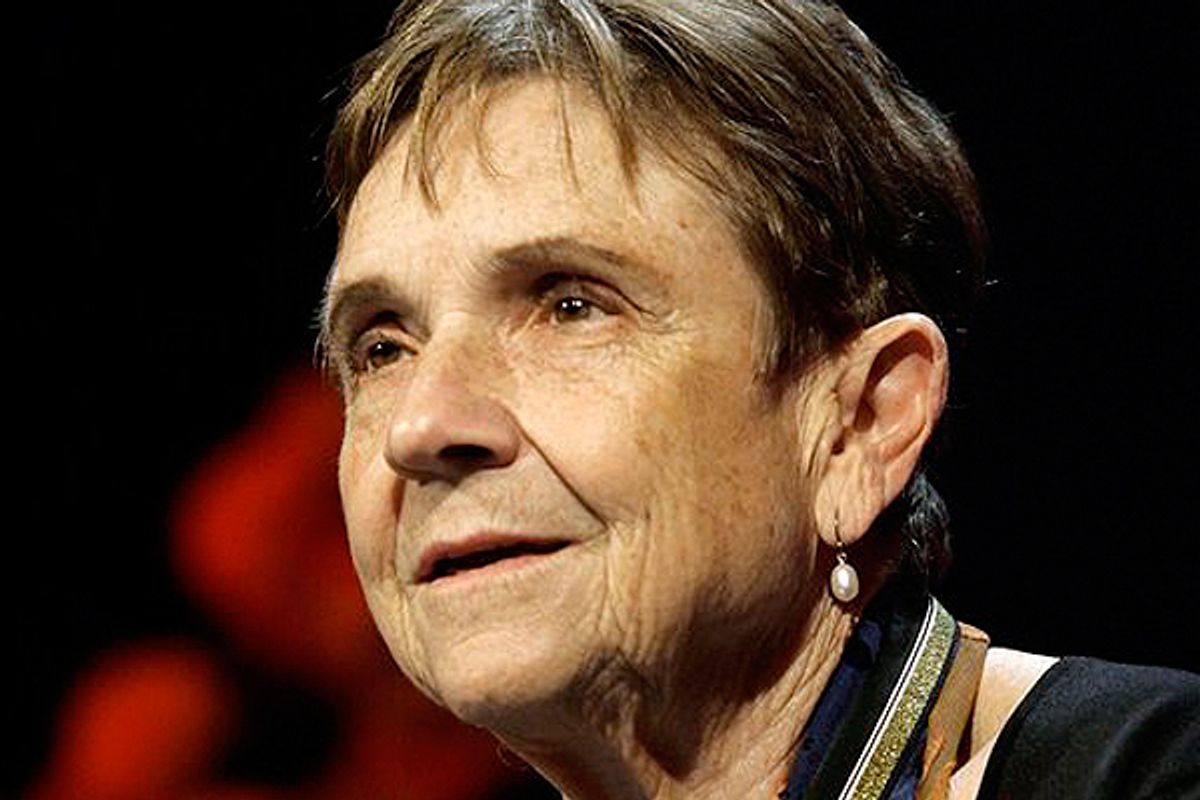 This originally appeared on Critical Mass, the blog of the National Book Critics Circle Board of Directors.

Adrienne Rich was a major American poet, cultural critic, essayist and activist. Her six decades of verse and prose helped to change what was possible, both in the writing of poetry and in the work for social, economic and environmental justice that Rich herself came to see as inseparable from what she wrote. Nobody in the history of American writing had her combination of powers, and nobody gathered the same array of otherwise disparate admirers: She is both deeply, and widely, missed.

Rich’s first books, in the 1950s, established her formal skill; W. H. Auden selected her debut, "A Change of World," for the Yale Younger Poets prize when Rich was still an undergraduate, and some of its deftly careful work remains widely taught. She came into her own, however, beginning with "Snapshots of a Daughter-in-Law" (1963), one of the first collections of poems by anyone to bring to light the contradictions, the challenges and the frustrations of life as a woman, a mother, an intellectual and an American artist in those years: Rich in that poem imagines earlier women writers, among them Emily Dickinson, “knowing themselves too well in one another:/ their gifts no pure fruition, but a thorn … iron-beaked and purposed as a bird,/ dusting everything on the whatnot every day of life.”

As the 1960s continued Rich grew more doubtful about traditions — of family life, of political belief, of literary form -- and more confident that her poetry could unsettle them: Like many of her peers she reacted against war in Vietnam and racial injustice at home, and more than any of those peers she found ways of writing poetry that sounded as troubled as her country felt. She also found new forms, Americanizing the ghazal, for example, and inventing the prose poem as terse teleplay, as in “Shooting Script,” from "The Will to Change" (1970),  a set of directions to herself: “To pull yourself up by your own roots; to eat the last meal in your old neighborhood.”

Rich found new neighbors, and new directions, in the feminist movement, which recognized her as a leader, in her poems of the late 1960s and 1970s, first tormented and fierce, and then clear and confident. "Diving Into the Wreck" (1973), which won the National Book Award, remains her most famous single book, the one by which many readers discover her as a writer for whom the political had to be personal.  "The Dream of a Common Language" (1978) made available some of the first and still some of the most admired American verse about erotic love between women, in the sequence “Twenty-One Love Poems.”  The same book contained her talismanic poem about Marie Curie, who “died denying/ her wounds came from the same source as her power.”

Rich would never deny it. Her work of those years established her as a controversial figure, attracting polemics both for and against it; it also attracted the many readers who saw her not just as a thoughtful, inventive writer but also as a beacon for political change. Those readers would stay with her to this day.

By the end of the 1970s Rich had established herself as a literary and cultural critic too, introducing Emily Dickinson (“Vesuvius at Home”) and Elizabeth Bishop (“The Eye of the Outsider”) as poets whose perspectives challenged patriarchy, and introducing (in “Compulsory Heterosexuality and Lesbian Existence,” for example) foundations for lesbian and queer cultural criticism. Her first and longest prose book, "Of Woman Born: Motherhood as Experience and Institution" (1976), defended mothers by taking apart, with perhaps unprecedented honesty, our culture’s assumptions about them; the meaning of motherhood, like the meaning of womanhood, of citizenship, of activism, of literature, could be changed, and Rich had the will to change it.

She herself, and her poems, continued to change. "Your Native Land, Your Life" (1984), "An Atlas of the Difficult World" (1991) and subsequent books introduced Rich to the retrospective sequence, the poem of family (hence of  Jewish, and of Southern) heritage, and to the sequence based on geography: “I fix on the land. I am stuck to earth,” she wrote, introducing “a map of our country,” with its “battlefield/ from a nineteenth century war,” its “sea-town of myth and story when the fishing fleets/ went bankrupt.” Rich became a poet of California, where she settled with her partner Michelle Cliff; she remained a poet of feminism, and of the struggle for lesbian, gay and queer rights, but also a poet alert to other injustice, environmental and economic, a poet who insisted that her own left politics had to proceed as an alert, untidy, unfinished and international coalition: No cause stood alone.

Neither would Rich stand alone. "In Dark Fields of the Republic" (1995) “we were trying to live a personal life … But the great dark birds of history screamed and plunged/ into our personal weather.” And in "Fox" (2001) Rich looked back on her earlier life as a poet of well-made poems, a poet of the American establishment, considering what she had learned, what she had rejected, what she still owed, from her long quiet apprenticeship: “a soul can be partitioned like a country,” she wrote; “loyalties crumbling send up sparks and smoke.”

Rich the poet who remained true to her own mixed feelings was also a poet unafraid to offer moral instruction, to proffer judgments; the poet so strongly identified with causes was also a poet who kept interrupting herself in her poems, breaking apart and questioning her own rough forms. "The School Among the Ruins" (2004) memorialized both her commitments and her self-doubt, asking what use both would have in an America (or a “USonia,” as she called it) reshaped and deformed by 9/11.

Perhaps no American poet has had at once so large and loyal an audience, and such an influence on that audience, on what her readers wrote and what they chose to do with their lives.  The number and variety of tributes to Rich already present on the Internet, by professional writers and critics, by career activists, and by many other fans, testify to  Rich’s importance for a wide range of American readers. She will be remembered for the proprieties of her earliest work, and for the wild inquiries of the latest; for her California coast, her Cambridge, her New York City, her Baltimore; for her responses to American history, to “North American Time,” and for her returns to the European thought of Mary Wollstonecraft, of Brecht and Marx; for her long declamatory lines and her harsh, short ones; for her poems modeled on biography, on archaeology, on film, on diaries, on explorers’ journals, on maps, on the long history of older short poems; for her polemics, which did change public life, and for her quarrels with herself.