It's not just Wall Street. Every profession from medicine to academia has been corrupted by our money obsession 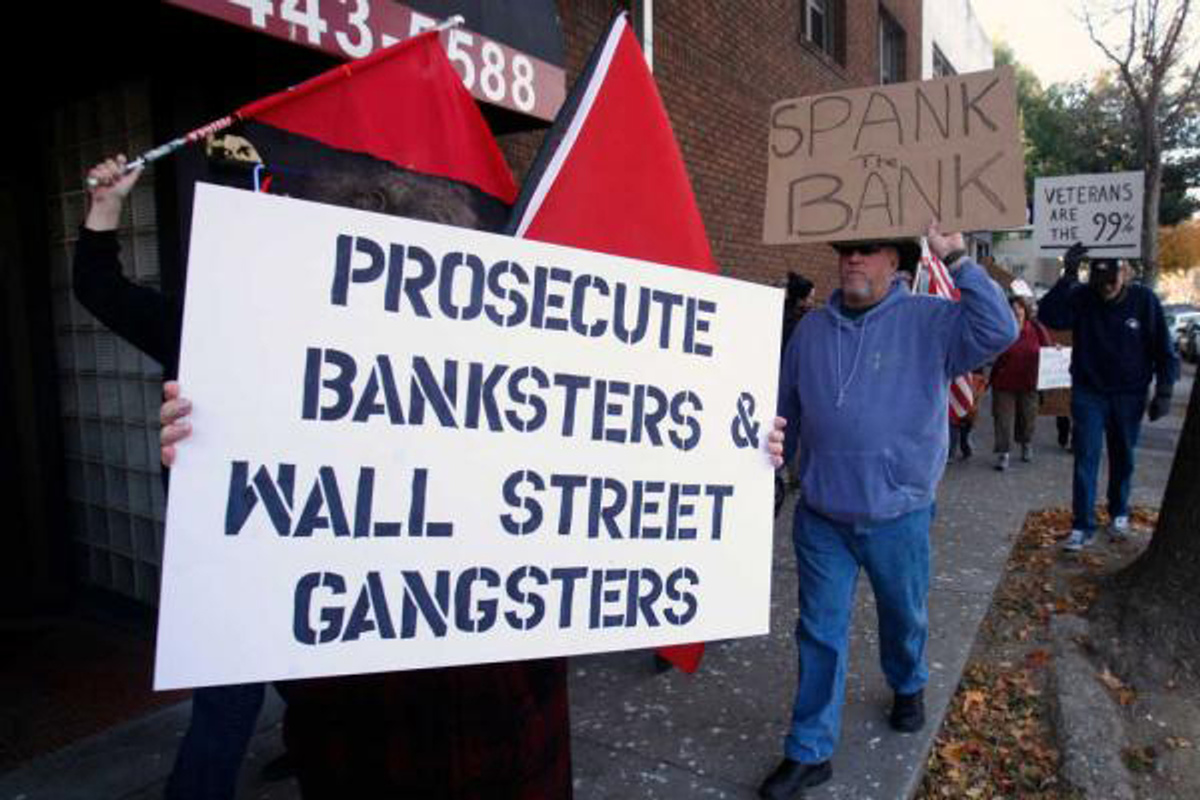 Members of Occupy Sacramento march through downtown Sacramento as part of the "National Day of Action to Stop and Reverse Foreclosures," Tuesday, Dec. 6, 2011 (AP/Rich Pedroncelli)
--

The following article is an excerpt of a piece that first appeared in The Baffler. Click here to subscribe to The Baffler and read articles by David Graeber, Barbara Ehrenreich, Chris Lehmann, Jim Newell, Maureen Tkacik, and James K. Galbraith in the current issue.

"The “sound” banker, alas! is not one who sees danger and avoids it, but one who, when he is ruined, is ruined in a conventional and orthodox way along with his fellows so that no one can really blame him." —John Maynard Keynes

In the 12 hapless years of the present millennium, we have looked on as three great bubbles of consensus vanity have inflated and burst, each with consequences more dire than the last.

First there was the “New Economy,” a millennial fever dream predicated on the twin ideas of a people’s stock market and an eternal silicon prosperity; it collapsed eventually under the weight of its own fatuousness.

Second was the war in Iraq, an endeavor whose launch depended for its success on the turpitude of virtually every class of elite in Washington, particularly the tough-minded men of the media; an enterprise that destroyed the country it aimed to save and that helped to bankrupt our nation as well.

And then, Wall Street blew up the global economy. Empowered by bank deregulation and regulatory capture, Wall Street enlisted those tough-minded men of the media again to sell the world on the idea that financial innovations were making the global economy more stable by the minute. Central banks puffed an asset bubble like the world had never seen before, even if every journalist worth his byline was obliged to deny its existence until it was too late.

These episodes were costly and even disastrous, and after each one had run its course and duly exploded, I expected some sort of day of reckoning for their promoters. And, indeed, the last two disasters combined to force the Republican Party from its stranglehold on American government—for a time.

But what rankles now is our failure, after each of these disasters, to come to terms with how we were played. Each separate catastrophe should have been followed by a wave of apologies and resignations. Taken together—and given that a good percentage of the pundit corps signed on to two or even three of these idiotic storylines—they mandated mass firings in the newsrooms and op-ed pages of the nation. Quicker than you could say “Ahmed Chalabi,” an entire generation of newsroom fools should have lost their jobs.

But that’s not what happened. Plenty of journalists have been pushed out of late, but the ones responsible for deluding the public are not among them. Standard & Poor’s first leads the parade of folly (triple-A’s for everyone!), then decides to downgrade U.S. government debt, and is taken seriously in both endeavors. And the prospect of Fox News or CNBC apologizing for their role in puffing war bubbles and financial bubbles is no better than a punch line: what they do is the opposite, launching new movements that stamp their crumbled fables “true” by popular demand.

The real mistake was my own. I believed that our public intelligentsia had succumbed to an amazing series of cognitive failures; that time after time they had gotten the facts wrong, ignored the clanging bullshit detector, made the sort of mistakes that would disqualify them from publishing in The Baffler, let alone the Washington Post.

What I didn’t understand was that these weren’t cognitive failures at all; they were moral failures, mistakes that were hard-wired into the belief systems of the organizations and professions and social classes in question. As such they were mistakes that— from the point of view of those organizations or professions or classes—shed no discredit on the individual chowderheads who made them. Holding them accountable was out of the question, and it remains off the table today. These people ignored every flashing red signal, refused to listen to the whistleblowers, blew off the obvious screaming indicators that something was going wrong in the boardrooms of the nation, even talked us into an unnecessary war, for chrissake, and the bailout apparatus still stands ready should they fuck things up again.
Keep on Dancing Till the World Ends

My aim here isn’t to take some kind of victory lap or to get in the granite faces of our eternal pundit corps one more time. Nor is it to blame Republicans for our problems. It is true that, from the scandal of CEO pay to the scandal of lobotomized regulators, each of the really monumental mistakes of our time arose from the trademark doctrines of the political right. And, yes, it was the Bush administration that muzzled government scientists and declared war on organized intelligence in a hundred other ways.

But the problem goes far beyond politics. We have become a society that can’t self-correct, that can’t address its obvious problems, thatcan’t pull out of its nosedive. And so to our list of disasters let us add this fourth entry: we have entered an age of folly that—for all our Facebooking and the twittling tweedle-dee-tweets of the twitterati—we can’t wake up from.

Besides, the reign of corruption has taken plenty of right-wing scalps, too. In fact, one of the most interesting comments on the machinery that is making us stupid came from the libertarian Doug Bandow of the Cato Institute, after he had temporarily lost his job (he got it back a little while later, don’t worry) for puffing clients of Jack Abramoff in exchange for the lobbyist’s largesse. But what was the big deal? fumed Bandow in a 2006 cri de coeur called “The Lesson Jack Abramoff Taught Me.” Living in Washington was expensive; and besides, everyone was basically on the take:

Many supposedly “objective” thinkers and “independent” scholar/experts these days have blogs or consulting gigs, or they are starting nonprofit Centers for the Study of... Who funds their books, speeches or other endeavors? Often it’s those with an interest in the outcome of a related debate. The number of folks underwriting the pursuit of pure knowledge can be counted on one hand, if not one finger.

Bandow had been caught, yes, but he wasn’t the only culprit, he insisted—with some accuracy. All opinions are paid for. Everything written in this city—everything in this land that is thought and tweeted and toasted with a hip hip hooray . . . is Abramoffed. We are all slaves to the market; there is no way to stand outside that condition.

I can remember the contempt I felt when I read Bandow’s essay, back in 2006. Of course there was a place where ideas weren’t simply for sale, I thought: the professions. Ethical standards kept professionals independent of their clients’ gross pecuniary interests.

These days, though, I’m not so sure. Money has transformed every watchdog, every independent authority. Medical doctors are increasingly gulled by the lobbying of pharmaceutical salesmen. Accountants were no match for Enron. Corporate boards are rubber stamps. Hospitals break unions, and, with an eye toward future donations, electronically single out rich patients for more luxurious treatment.

And consider the university, the mothership of the professions. For-profit higher education is today a booming industry, feeding on the student loans handed out to the desperate. Even the traditional academy, where free inquiry nominally lives, has become a profit center, a place where exorbitant tuition somehow bypasses the adjuncts who do the teaching but makes for lavish executive salaries; where economists pull in fantastic sums for “consulting”; and where the prospect of launching the next hot Internet startup is a gamble that it is worth bending any rule to take.

Another thing Doug Bandow got right was one of the basic reasons for all this: for most Americans, the building blocks of middle-class life—four years at a good college, for example—are growing ever more expensive and out of reach. For other people and other entities, though, they grow relatively cheaper; they are baubles to be handed out as necessity requires. The result is exactly what our nineteenth-century ancestors would have expected. Think of Jack Grubman, the superstar stock analyst of the nineties, who famously upgraded AT&T’s shares in exchange for getting his children into a ferociously competitive  preschool. Or the congressional aides on Capitol Hill, surrounded by the inaccessible luxuries of Washington, D.C., who would do nearly anything for a lobbyist in exchange for a shot at a future job on said lobbyist’s staff. Or the actual members of Congress who sold their votes in exchange for little bits of sushi or a blowout party in Hawaii or good seats at sporting events.

And as we serve money, we find that money wants the same thing from us: to push everyone it beguiles in the same direction. Money never seems to be interested in strengthening regulatory agencies, for example, but always in subverting them, in making them miss the danger signs in coal mines and in derivatives trading and in deep-sea oil wells. You can have a shot at being part of the 1 percent, money tells us, only if you are first committed to making the 1 percent stronger, to defending their piles in some new and imaginative way, to rationalizing and burnishing their glory, to exempting them from regulation or taxation, to bowing down as they pass, and to believing in your heart that their touch will heal scrofula.

So money gives us not only the bond-rating scandal of 2008, in which trash investments were labeled super-wholesome so that the rating agency in question could win more business from the manufacturers of said trash; and not only the Enron scandal of 2001, in which head-spinning conflicts of interest were over- looked by Enron’s accountants in order to preserve the nice ka-ching those conflicts delivered to everyone involved; but also the analyst scandal of 2002, in which Wall Street insiders pushed certain corporate securities on their sappy middle-American clients in order to win those corporations’ business—and then while it is corrupting all the watchmen, money also dashes off an enormous body of literature assuring those sappy middle Americans that they are in fact financial geniuses who can outsmart any possible combination of Wall Street insiders, because together the saps reflect the wisdom of markets or some other such reassuring bullshit. And all of it— the airy populism of the market and its simultaneous complete negation by reality—is as determined by the current distribution of wealth as gravity is by the mass of the planet. Both of them will continue indefinitely regardless of the constant violence the one does to the other simply because that’s the way money wants it, and every dollar in the nation will strain at its leash to ensure that financial naïveté  persists on into infinity in complete ignorance of financial fraud.

To read the complete piece, visit The Baffler’s website, or go ahead and subscribe to The Baffler, by clicking here.