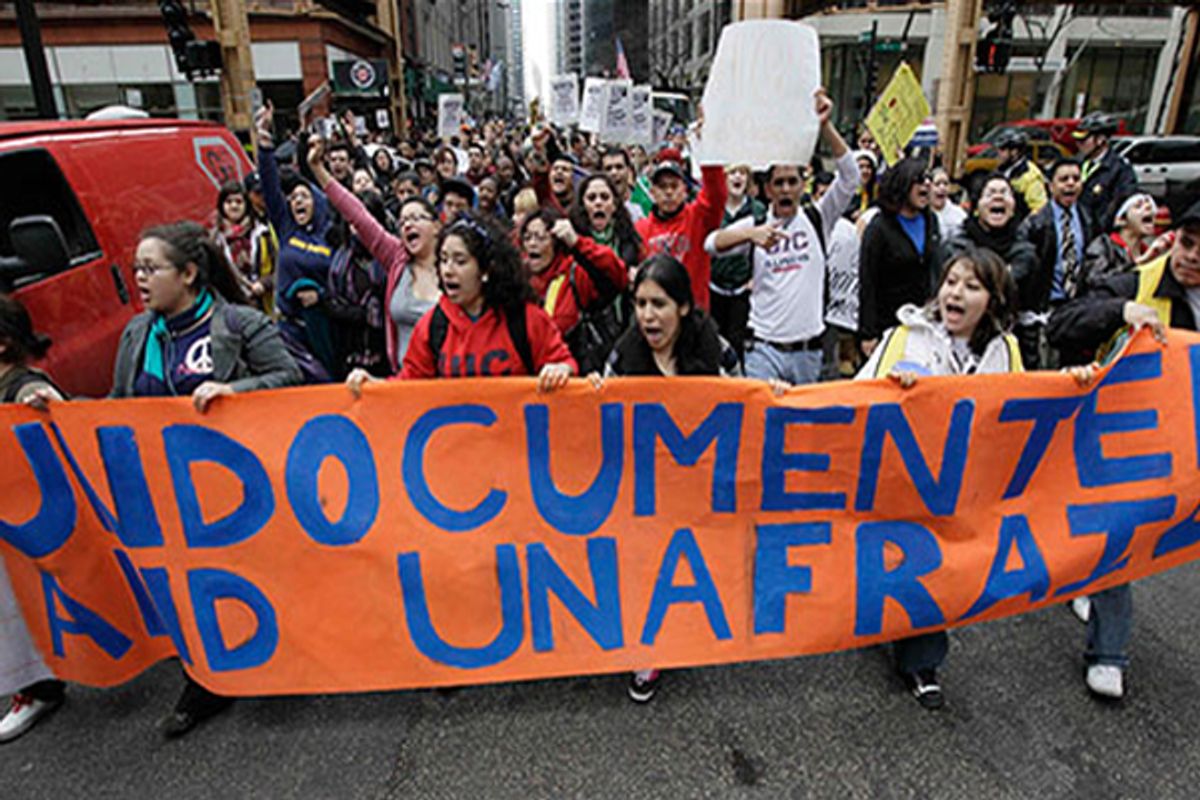 On March 14, Tania Chairez and Jessica Hyejin Lee walked into the Immigration and Customs Enforcement offices in downtown Philadelphia and handed over letters demanding the release of Miguel Orellana, an undocumented immigrant who has been detained for eight months at a Pennsylvania detention center. Both Chairez, a 19-year-old sophomore at the University of Pennsylvania, and Lee, a 20-year-old junior at Bryn Mawr College, were undocumented immigrants themselves, having been brought to the U.S. by their parents at ages 5 and 12, respectively. After making their demand, they exited the building, sat down in the middle of the street, and began shouting “Undocumented! Unafraid!” They were arrested after refusing to move, putting themselves at risk of deportation in the process.

With Washington unlikely to take up immigration reform any time soon, some immigrants, like activists in the Occupy and LGBT movements, are turning to more confrontational tactics. Young undocumented immigrants across the country have come out as "undocumented and unafraid" in the most conspicuous of places: in front of the Alabama Capitol; in Maricopa County, Ariz., home of Sheriff Joe Arpaio; in front of federal immigration courts; and even inside ICE offices, processing centers, and detention centers. While they sometimes have specific causes, such as Orellana’s release, they also had a larger demand: that the civil and human rights of all undocumented immigrants be recognized and respected.

This is a marked change in goals and tactics from just one or two years ago, when the DREAM Act, which would have given some young undocumented immigrants a path to securing legal status, was the main immigration issue. Young activists, including many potential beneficiaries who are known as DREAMers, organized, rallied, held sit-ins, and undertook hunger strikes. A small group even marched from Florida to Washington, D.C., to press for its enactment. But it failed in Congress. Since then, students like Chairez and Lee are dreaming bigger and bolder. They aren’t just arguing that DREAMers like themselves — college students with clean records whose parents brought them to the U.S. when they were children — should be given a path to citizenship. They are helping to break down the artificial divisions — including those made by people who consider themselves immigrant advocates — between “model” immigrants (i.e., DREAMers) and others. Activists are forcing ICE to live up to its word that it is focusing its efforts on deporting “dangerous" criminals and not DREAMers. “We believe that regardless of [Miguel’s] immigration status, he should be treated as a human being,” Chairez shouted into a megaphone while seated in the street during the demonstration. “We have human rights.”

Youth-led immigrants-rights groups have organized in support of such efforts. The National Immigrant Youth Alliance has published an online “Coming Out Guide” and sponsored a “Coming Out of the Shadows” week this month. The movement has caught the attention of traditional immigrants-rights groups. National Council of La Raza is cautiously on board, stressing that coming out is an individual choice. “For many of the students this is their way of moving their advocacy forward,” says Laura Vazquez, a legislative analyst at NCLR. “We think it has been tremendously helpful for individual students who take that choice and make that decision.” However, some groups, like the American Immigration Council, see the tactic as too dangerous. “[The AIC] would never recommend to anyone that they put themselves at risk,” says communications director Wendy Sefsaf.

Yet, increasingly, young undocumented immigrants are doing just that and insisting that they will no longer remain silent. So far, according to activists, none of the recent acts of civil disobedience have resulted in deportation, but the threat remains very real as the Obama administration continues to deport young undocumented immigrants, including those whose cases have received considerable publicity. Young activists are well aware that any kind of legislative reform in the short-term, and especially before this fall’s elections, is highly unlikely.

They’re using their actions, however, to raise awareness and funding in support of their cause. In Philadelphia, within hours of Chairez and Lee’s arrest other DREAMers kicked off a well-orchestrated publicity campaign. Emails were sent from Chairez and Lee’s accounts stating, “If you are reading this email I have been arrested in a planned act of civil disobedience.” Dream Activist Pennsylvania, an organization of which both are members, sent out messages to followers on Twitter and posted videos of their arrest, as well as video messages Chairez and Lee recorded prior to the action. The organization also sent out messages soliciting donations for their bail. News of the arrests spread via television, radio and English- and Spanish-language print media outlets.

By engaging in direct confrontations and being more open about their undocumented status, these activists hope to pave the way for broader changes than the ones the DREAM Act would have achieved.

Adam Goodman is a doctoral student in history at the University of Pennsylvania. Follow him on Twitter @adamsigoodman.