The message of Jennifer's body 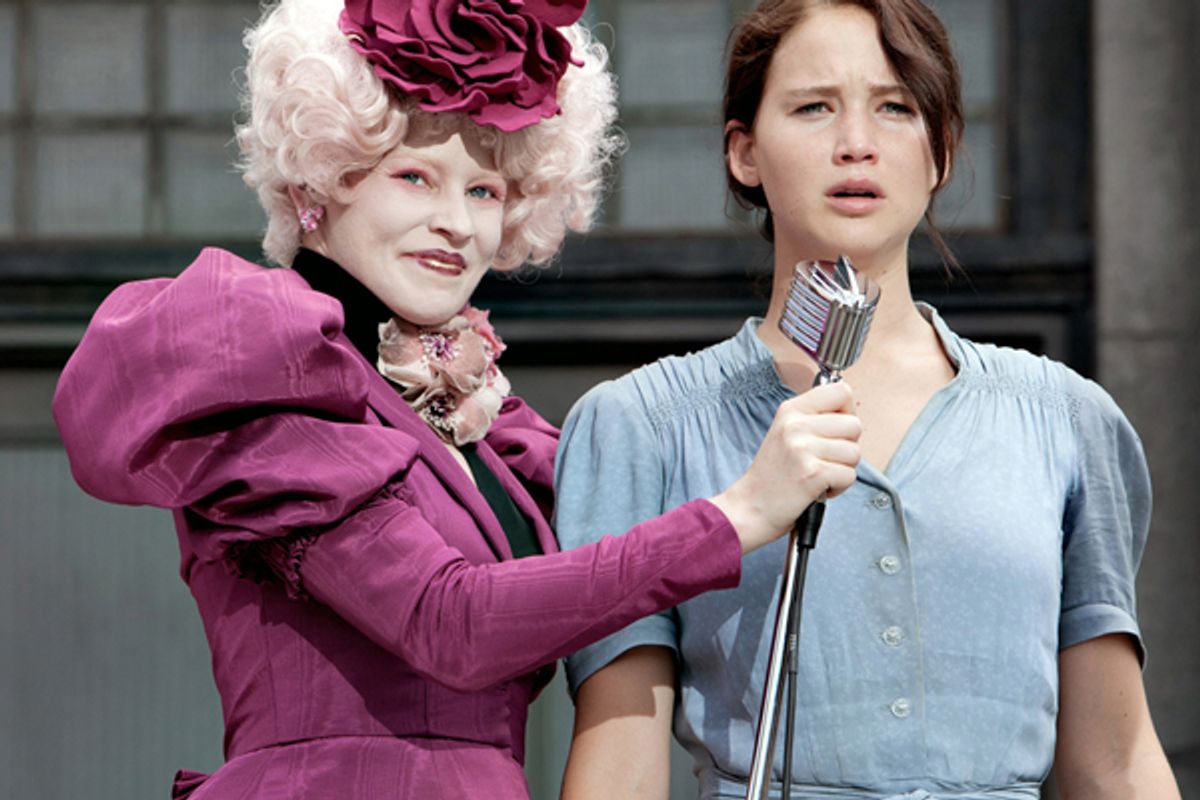 Elizabeth Banks and Jennifer Lawrence in "The Hunger Games"
--

Jennifer Lawrence’s body — her perfectly lovely, slender-but-not-rail-thin, able body — is presenting more complications than it rightfully should. Whether it’s Hollywood blogs referring to her as having “lingering baby fat” or as being “big-boned,” or the New York Times simply stating that she didn’t look “hungry enough” to play Katniss Everdeen, the resilient hardscrabble heroine of "The Hunger Games," all eyes are on Lawrence’s body. And, predictably, critics of the critics were quick to jump in to point out the ludicrousness of essentially calling Lawrence too hefty to play Katniss.

I’m just as tired as the next film-loving feminist of seeing the beauty myth played out ad nauseam on screens big and small. But the story here is neither Lawrence’s size nor even the Hollywood thin imperative, but rather why Lawrence was cast in the first place.

Why, in an industry that routinely casts underweight women in pretty much everything, would "The Hunger Games" team not pluck from its enormous pool of underfed talent? Katniss’ scrawniness is an actual plot point in the book; one of her recurring concerns before the games is putting on weight after a lifetime of being chronically hungry in order to both feel and appear stronger before entering the arena. (As L.V. Anderson at Slate points out, you can be starving and not be rail-thin, but that’s not how Katniss is described in the book.) In any other circumstance I might be mildly encouraged by seeing an actress cast in a major film who didn’t look emaciated: Lawrence is slender by any standard, but still curvier than many of her peers. Yet I can’t quite cheer this one, because Lawrence’s casting says more about the paucity of rich roles for young actresses than it does about any sort of shifting body standards.

"The Hunger Games" inhabits an unusual space: Not only were the books an enormous commercial success, but between the trilogy’s timing with Occupy Wall Street, a growing sense of unease about income disparity in America, and a greater amount of attention paid to feminist critique, the story is a magnet for critical analysis. Whichever actress was cast in that role was guaranteed to be taken seriously, and the producers also knew they had to cast someone who would be able to assume that guarantee with aplomb. They likely chose Lawrence because of her raw talent and her already burgeoning reputation as a Serious Actress, with her Oscar-nominated performance in "Winter’s Bone." It was a good bet: Peter Travers says she "reveals a physical and emotional grace that's astonishing"; Melissa Anderson at the Village Voice comments on her "particular gift for exuding iron determination"; and Salon's own Andrew O'Hehir notes how Lawrence "commands the screen with effortless magnetism."

But I can’t help wondering if, in casting Lawrence, they took advantage of the chance to cast someone who oh-so-slightly veered away from the strict template of beauty. It was the perfect opportunity to placate the growing number of moviegoers questioning why only anointed beauties were being cast in major films; the still-present adulation of so-called curvy performers like Kate Winslet and Beyoncé, and Melissa McCarthy’s popular and critical embrace after "Bridesmaids," showed that audiences were hungry for women who didn’t look like they were starved.

As a feminist moviegoer who is rightfully tired of seeing the beauty imperative stamped across every film I see, I’m the prime target for being placated by this gesture. Lawrence’s body, by being a shade heavier than her contemporaries', becomes a statement: Her body legitimizes the film, and also legitimizes Katniss. It literally adds more weight to the character. “We can’t have an insubstantial person play [Katniss],” director Gary Ross told Entertainment Weekly. He was speaking of the psychic weight Lawrence brought to the role, not her physical weight. But when Hollywood defaults to rail-thin beauties for every role out there, is it any wonder the two become conflated?

Lawrence’s casting isn’t really the problem; it’s the dearth of complex, layered roles for actresses her age, who are more often cast as flimsy love interests with the barest of personality quirks to make her “relatable.” ("500 Days of Summer," anyone?) Since most roles for that age group are written to be basically interchangeable, it makes sense that possessing another sort of gravitas — a figure that barely bent the rules of Hollywood norms — would be an asset during casting. (We saw much the same with Kate Winslet, another talented actress who, from a very young age, rarely got to do comedy in part because her womanly figure made it easier for casting agents to see her in roles requiring emotional maturity.)

The parade of romantic comedies, "quirky girl" roles, and male-fantasy ciphers (sorry, Lisbeth Salander, I'm looking at you) offers types, not characters. Even actresses once deemed "serious" are too often offered paltry material: Kristen Stewart's talent shone even in child-actor roles like "Panic Room," but it is largely wasted on Bella, who could be played by essentially any actress able to stand upright. And when one of the best roles for young actresses is a Muggle, we're in a sorry state of affairs. If we had meatier roles for women, the search to find the most “substantial” actress to fill the role might not feel as urgent. And perhaps that would have allowed a similarly talented actress who fit Collins’ physical description of Katniss (including the dark hair and “olive skin” that made some question why the role went to a white actress) to inhabit the role.

The meaty roles for women have become concentrated among a handful of actresses. We see this most clearly in niche roles, like sexy-lady-over-60 — I mean, name two who aren’t Helen Mirren. It’s a little more diffuse for midcareer actresses (think Rachel Weisz and Cate Blanchett) but actresses under 25 are more likely to be cast as a talking cream puff than anything that allows for nuance.

In the end, I do think Lawrence was an excellent choice for the role, and I’m not trying to nitpick her casting or performance; books-to-films are rarely known for their fidelity to the original, and "The Hunger Games" got it right more often than not. Most important, I’m not trying to nitpick her figure, which, in a normal world, would be understood as a tool a talented actress plays to embody a character who, despite her impoverished hunger, never lapses into frailty. More than that, I’d like for her body to be beside the point. But in the climate we currently have for roles for young actresses, that’s an impossibility.