Two cartoon characters from the left and right had a nice dinner. What does that tell us about American politics? 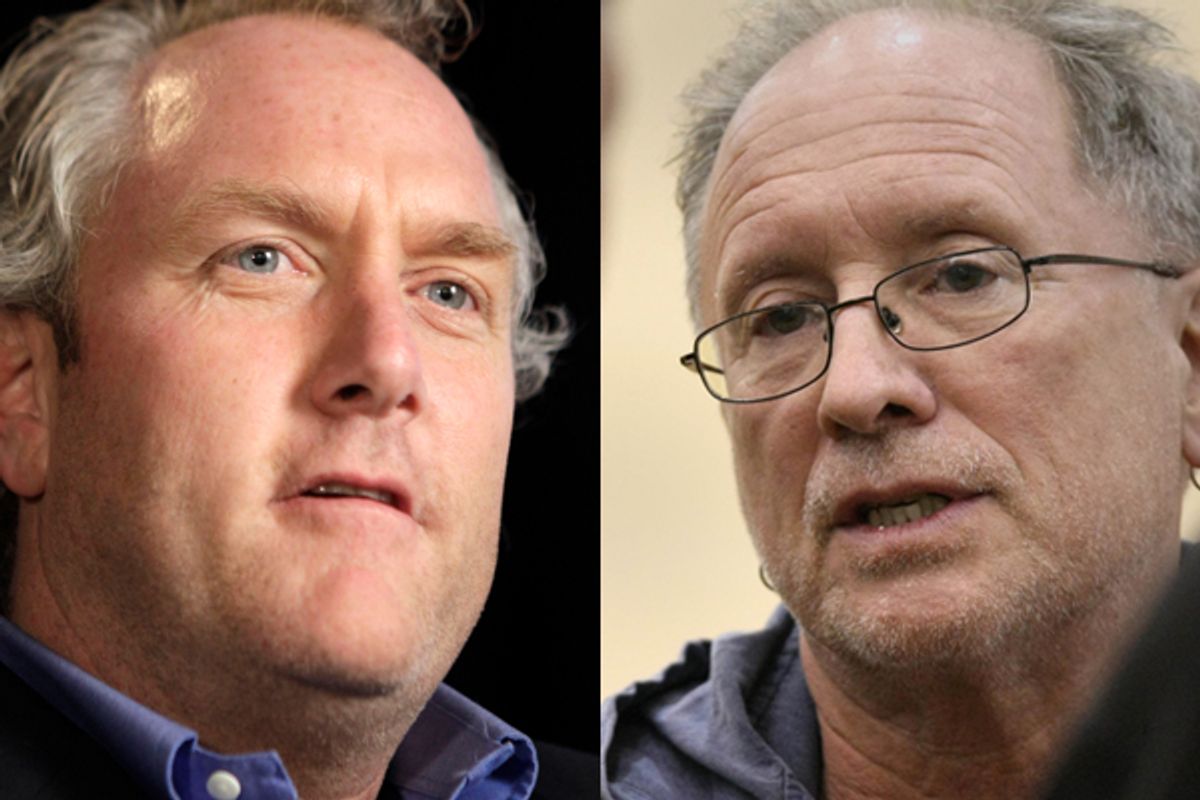 I saw at least one of Andrew Breitbart's own tweets about this before he died, but now the Boston Review is up with Bill Ayers's account of hosting a dinner for Breitbart, Tucker Carlson and their righty companions, just a few days before Breitbart mysteriously collapsed near his Los Angeles home. Reading the piece made me strangely sad. Not about Breitbart, though my heart still goes out to his family, but about American politics.

The story of the encounter between Ayers and his wife Bernadine Dohrn – former Weatherpeople who planned and carried out cruel and politically destructive bombings in the late 60s and early 70s – and Breitbart, Carlson and friends made newly vivid our increasingly cartoonish political culture. Wow: Ayers is a 68-year-old radical who did some bad things in his youth, then settled fairly quietly into the left-wing of the Chicago education world, teaching and raising a family. He became a leading character in the right's attacks on Barack Obama in 2008 because they had served on a board together and were politically acquainted. At the time, I thought it quite telling that the right had to go all the way back to the era of Richard Nixon to practice its Nixonian fear and smear politics. But hey, it let Sarah Palin say the president liked "pallin' around with domestic terrorists."

At their dinner, Ayers and Dohrn and Carlson and Breitbart even made common cause over the fact that "we were all convenient caricatures in the 'lame-stream' media," Ayers shares (thus confirming every anti-elitist's belief about what the well-off and famous do when they get together: they commiserate about the burdens of fame, across party lines.) But the reasons for Ayers' fame are roughly 40 years in the past. Carlson and (until last month) Breitbart have been actively engaged in contemporary American politics, in a spirit that, interestingly, borrowed from the 60s counterculture. Both decided the way to get attention was to be outrageous and sometimes juvenile, to mock and expose the powerful. Still, between the two sets of "activists," there was really no comparison in terms of who was relevant today.

Ayers' account of their get-together spends too much time detailing the tedious debate over whether the meeting should even take place. Ayers and Dohrn had auctioned off a dinner they'd host and prepare and serve, to benefit a local non-profit, The Public Square – and for a while Chicago folks debated whether the former Weathercouple should have been included in the benefit auction. Much more bitter was the split on the left, as colleagues argued that Ayers and Dohrn shouldn't host the likes of Breitbart and Carlson. Reading Ayers' account reminded me of something else that's awful about American politics: The amount of time the left spends debating ridiculous non-issues. Whether we like it or not, Breitbart and Carlson didn't need Ayers to legitimize them, they're admired figures on the right. Who cares if Ayers hosted them for dinner? "No wonder the cadre of right-wing keyboard flamethrowers feels so disproportionately powerful," Ayers writes. "Liberals seem forever willing to police themselves into an orderly line right next to the slaughterhouse."

At the dinner, many toasts were made, but no serious ideas seemed to be genuinely engaged. Ayers and Dohrn preached peace and disarmament; by their account, Breitbart and Carlson advocated wars with North Korea and China. They all seemed to surprise one another about how darn affable they were, and how easy it was for all of them to get along.

So why did they bother?

Breitbart and Carlson paid $2,500 for dinner with the ex-Weatherpeople because they're in search of the lefty Weatherfolk of today. Even when they don't find them, they try to invent them: attempting to make lawless radical demons out of ACORN and Shirley Sherrod; Sen. Mary Landrieu and the participants in the Journolist. Sometimes they have an impact: Breitbart wielded Rep. Anthony Weiner's dick shots so well politically that Weiner was forced to resign. (Yet before he died, Breitbart was committed to "proving" that Occupy Wall Street forces were the reincarnation of Weatherkooks and  the Symbionese Liberation Army. His last bit of performance art was to scream at OWS folks "Stop raping people!" That just made him look crazy). Right now, Carlson is at the center of the right-wing machine smearing Trayvon Martin, and its scurrilous "revelations" are spilling into mainstream commentary about the case (Breitbart would be competing with him scoop for scoop, if he were alive.) Even before reading Ayers' piece, I've been trying to understand what they want to accomplish in this case. Ayers' article helped me along -- a little.

I've already written about why new details about Martin, even if true, don't change the central facts of the case: that the cops botched the investigation into his killing at minimum because they didn't expect to be challenged on the claim that a white man shot a young black man in self-defense. (The truth may be more disturbing.) But why is the right so invested in the image of Trayvon as an animal: a thuggish, gold-toothed Lil' Wayne quoting predatory gangster? Is their point that the theoretical existence of young black men who might do bad things means we must always trust the police and never ask questions about murky deaths? Why are they so invested in that story?

We know Breitbart and now Carlson are convinced that the left houses the "real racists," and that we're ginning up this non-controversy to make clear that this is still an irredeemably racist nation – and our first black president is in charge of our whole conspiracy. Is that the same black president (with a white mom) who uses his own story as evidence of America's progress and perfectability; who says proudly that it's a story that could only happen here? Plus, I've never understood why they think we're trying to foment race war – even if you add liberal white race traitors like me, our side would be outnumbered.

The problem is, Breitbart and Carlson haven't really done a good job at locating these new race-war revolutionaries. Fox News is fixated on the fringy "New Black Panthers," and Breitbart apparently thought he'd found a black Bill Ayers he could tie to Obama with his "shocking" Derrick Bell tapes. The fact that the president supported the late civil rights crusader's effort to diversify Harvard's faculty, even the detail that they'd embraced, is in pretty much every book I've read about Obama, including his own. The Bell tapes failed to shock, but Carlson and Breitbart's minions will no doubt continue to look for more.

Thwarted in their efforts to locate a living lefty bad guy in contemporary politics, they had to settle for meeting a lefty bad guy whose bad deeds are decades behind him. After the dinner, Breitbart tweeted:

Shorthand: Ayers, a gourmand, charmer. Dohrn, hot at 70, best behavior. Potemkin dinner. Pampered by their coterie. Kicked out by half-time.

The fact that he's not even that bad a guy, in person, probably makes him worse – it's the banality of evil that makes it dangerous, right?

But back at the hotel bar, Breitbart did a radio interview in which he elaborated:

We were exposed to the two most sophisticated dinner party-throwers in the world . . . This was their battlefield and they couldn’t have been more charming. . . I think I’m going to try and reach out to Bill Ayers and try and figure out if I can maybe do a road trip across the country with him—him and me—and he can show me his America, and I can show him my America, and maybe we can film it and let people decide. Because I’ve got to be honest with you, I liked being in the room with him, talking with him.

I never knew when to take Breitbart's shtick seriously, but a Road Show with Bill Ayers? Really? It's one of those ideas that makes me think he was just an old carney at heart, or a traveling vaudeville guy. To him, politics was spectacle – but he had a talent for dragging a lot of people along for the ride, myself included, regrettably.

I guess I'm glad that the dinner was pleasant, that it didn't feature Breitbart screaming "Stop bombing people!" at Ayers and Dohrn. They signed one another's books; the vanity of authors knows no ideological lines. They spent a night basking in their own odd collective celebrity, people known for being in "politics" but whose actions, and fame, are only indirectly political – and which hadn't made life better for people, but worse. We're certainly not a better country for Ayers' and Dohrn's violence ( they're not (in)famous for their constructive Chicago community work of recent years). And while I'm not equating Breitbart and Carlson's crusades against their enemies to genuine violence, by any means, there is a coldness and a cruelty as they target their enemies, almost impersonally, and make them into something they're not --a racist, in Shirley Sherrod's case -- or something they're not merely – a married Twitter wannabe cheater, in the case of Weiner – or someone we're not supposed to care about – a menacing gangbanger, Trayvon Martin.

It's spectacle, sound and fury, leaving us no better able to understand or address America's problems in the wake of their crusades. We still don't know what killed Breitbart, but the constant search for an enemy to destroy can't be good for anyone's heart. I'm glad he had a nice meal.