Who's buying your TV station?

Big media groups stand to make billions on political ads this year. We should at least know who's paying for them 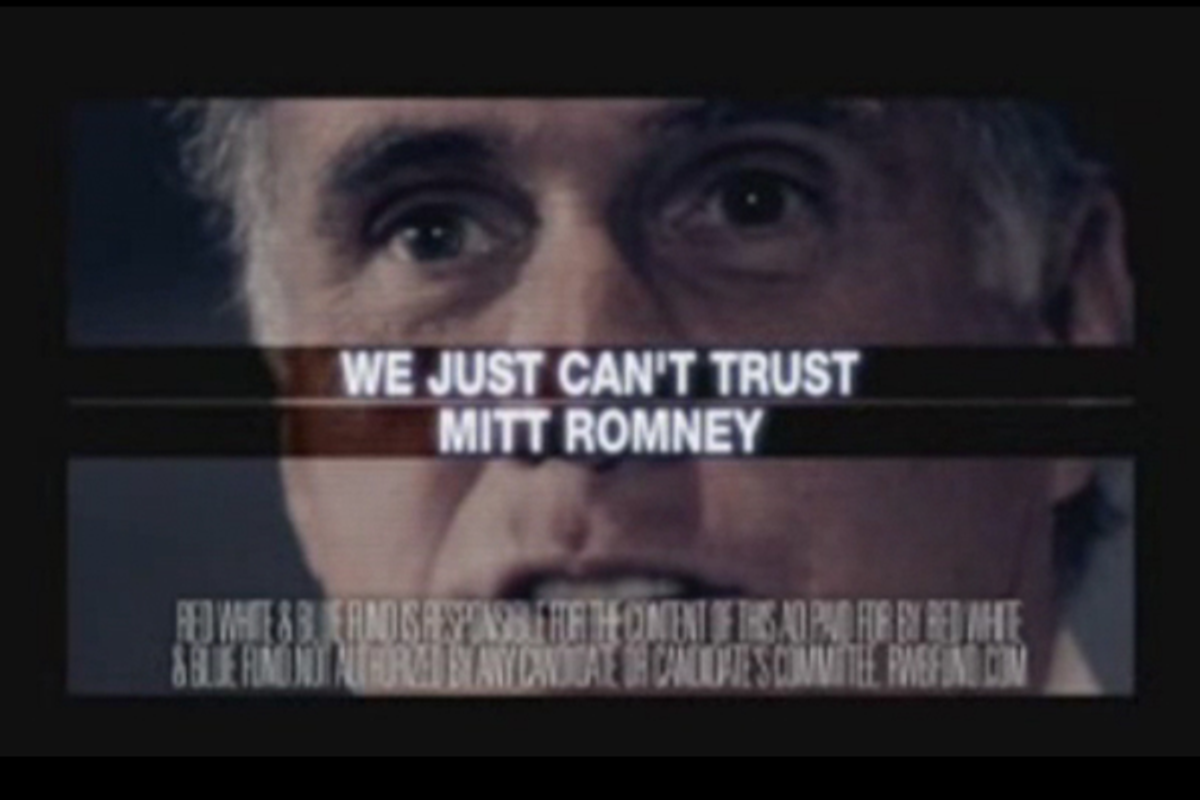 Screenshot from an ad paid for by the Red, White and Blue Fund, a pro-Santorum super Pac
--

Over the years we’ve been reporting on how power is monopolized by the powerful. How corporate lobbyists, for example, far outnumber members of Congress. And how the politicians are so eager to do the bidding of donors that they allow those lobbyists to dictate the law of the land and make a farce of democracy. What we have is much closer to plutocracy, where the massive concentration of wealth at the top is protects and perpetuates itself by controlling the ends and means of politics.  This is why so many of us despair over fixing what’s wrong: we elect representatives to change things, and  once in office they wind up serving the deep-pocketed donors who put up the money to keep change from happening at all.

Here’s the latest case in point. The airwaves belong to all of us, right? They’re part of “the commons” that in theory no private interest should be able to buy or control. Nonetheless, government long ago allowed television and radio stations to use the airwaves for commercial purposes, and the advertising revenues have made those companies fabulously rich. But part of the deal was that in return for the privilege of reaping a fortune they would respect the public interest in a variety of ways, including covering the local news important to our communities. If they didn’t, they would be denied their license to use the airwaves at all.

Alas, over the years, through one ruse or another, the public has been shafted.  We heard the other day of a candidate for office in a Midwest state who complained to the general manager of a TV station that his campaign was not getting any news coverage. “You want coverage?” the broadcaster replied. “Buy some ads and then we’ll talk!”

That pretty well sums up the game. But hold your nose: It gets worse. The media companies and their local stations – including goliaths like CBS and Rupert Murdoch’s News Corp – stand to pull in as much as $3 billion this year from political ads. Three billion dollars! And most of that money will pay for airing ugly, toxic negative ads that use special effects, snide jokes and flat out deception to take us to the lowest common denominator of politics.

The FCC, the Federal Communications Commission, which is supposed to make sure the broadcasters don’t completely get away with highway or, rather, airwave robbery has proposed to the broadcasting cartel that stations post on the Web the names of the billionaires, and front organizations – many of them super PACs — paying for campaign ads. It’s simplicity itself: Give citizens access online to find out quickly and directly who’s buying our elections. Hardly an unreasonable request, given how much cash the broadcasters make from their free use of the airwaves.

But the broadcasting industry’s response has been a simple, declarative “Not on your life!” It would cost too much money, they claim. Speaking on their behalf, Robert McDowell, currently the only Republican commissioner on the FCC – the other one left to take a job with media monolith Comcast — said the proposal is likely “to be a jobs destroyer” by distracting station employees from doing their regular work. The party line also has been sounded by Jerald Fritz, senior vice president of Allbritton Communications, who told the FCC that making the information available on the Internet “would ultimately lead to a Soviet-style standardization of the way advertising should be sold as determined by the government.” We’re not making this up.

Steven Waldman, who was lead author of the report that led to the FCC’s online proposal, quotes a letter from the deans of twelve of our best journalism schools: “Broadcast news organizations depend on, and consistently call for, robust open-record regimes for the institutions they cover; it seems hypocritical for broadcasters to oppose applying the same principles to themselves.”

Hypocritical, but consistent with a business that values the almighty dollar over public service. The industry leaves nothing to chance. Through its control of the House of Representatives, it got a piece of legislation passed this past week euphemistically titled the FCC Process Reform Act. George Orwell must be spinning in his grave – this isn’t reform, it’s evisceration.

Not only does the bill remove roadblocks to more media mergers – further reducing competition – it would  subject every new rule and every FCC analysis of that rule to years of paper work and judicial review, enabling the industry’s horde of lawyers and lobbyists, “to throw sand in the works at every opportunity” as one expert puts it.  There was a noble attempt by California Congresswoman Anna Eshoo to include in this bill an amendment that, like the FCC proposal, called for stations to post on-line who’s putting up the big bucks for political ads. Shocker — it was rejected. Score another one for the plutocrats.

There is some good news. The White House opposes this latest bid by the broadcasting oligarchy to further eviscerate the public interest. And the fate of the House bill in the Senate is uncertain at best.  In the meantime, as far as those political ads go, we’re not totally helpless. Here’s what you can do: Under current law, local television stations still have to keep paper files of who’s paying for these political ads, and they have to make those files available to the public if requested.   You can even make copies to take away with you. So just go down to your nearest station, politely ask for the records, and then send the data online to the New America Foundation’s Media Policy Initiative or to the organization of investigative journalists called ProPublica. Both have mounted campaigns to get the information online.

Each is pulling together all the information on political ads they get from you and others — crowdsourcing  — and making it available to the entire country via the Internet. If you’re a high school teacher or college professor of journalism, have your students do it and maybe give them classroom credit for collecting the data democracy needs to work.

In other words, here’s a way citizens can take action even against the plutocrats who run Big Media and Congress.