Why liberals misunderstand the Supreme Court 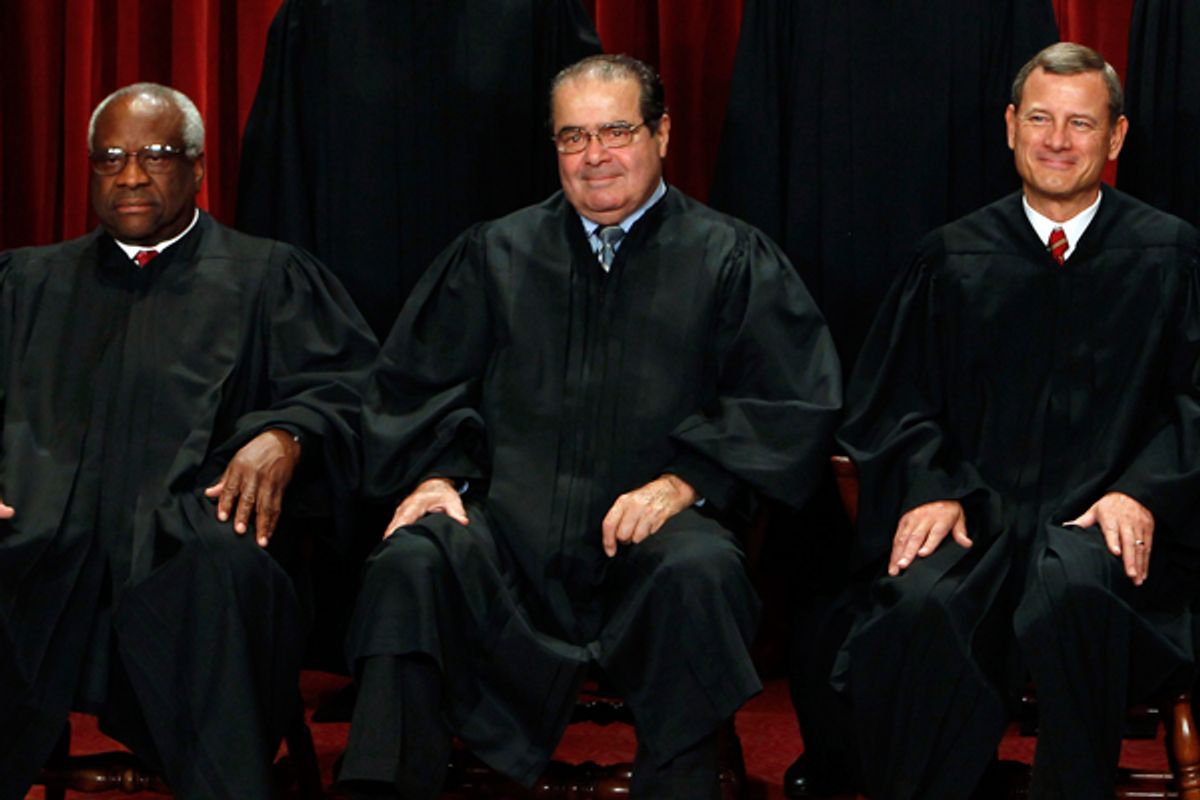 So the Supreme Court’s healthcare reform hearings are over, and liberals are depressed. Not since the Bush years have they seemed quite as despondent as they do now. The Court’s conservatives could easily strike down part or even all of the law based upon a transparently goofy reading of the Commerce Clause, declaring that Congress cannot require Americans to buy insurance. Even as shrewd, yet appropriately jaundiced, a Court watcher as Slate’s Dahlia Lithwick can barely believe what she saw. Before the arguments, Lithwick figured that the plaintiff’s argument (to strike the law) was so obviously ridiculous and tendentious that Chief Justice John Roberts would safely steer his legal ship to the safe port of a 6-3 or even 7-2 decision upholding the law. Now Lithwick, after watching the whole appalling spectacle, won’t put anything past this Court.

Even before she changed her mind, Lithwick realized that the argument itself would matter little, guessing instead that Roberts would cynically vote to uphold the law in order to avoid being seen for what he really is: a very conservative jurist intent on dismantling post-New Deal law. But many liberals — myself included, as much as I hate to admit it — wanted to believe that logic, coherence and precedent might actually persuade these sage “umpires,” as Roberts described himself during his Senate confirmation hearings, to think the issue anew. It’s almost touching how much faith liberals have in reasoned argument. And it’s a good thing, too. Reasoned argument is a hallmark of our Enlightenment antecedents. Better to think (if not write) like Kant than, say … oh, let’s not mention Hitler, he’s overused, but how about Mussolini?

But there is little reason to believe that the Court’s justices share this faith. The Court has moved ideologically to the right in recent years, and it is ever more likely to adjudicate cases accordingly. In a 2009 study from the Journal of Legal Analysis, based upon an analysis of a voluminous database of Supreme Court cases dating back to 1937 (and similar database of cases from the Court of Appeals), Richard Posner and William Landes find that four out the five most conservative judges to serve on the Court since then are there right now: the four acknowledged conservatives, Roberts, Scalia, Thomas and Alito (the other is former Chief Justice William Rehnquist). In fact, the “moderate” conservative, Anthony Kennedy, is No. 10 on the historical list of Court conservatives. By contrast, only one current Court member makes the top 10 of liberal rankings, Ruth Bader Ginsburg, at No. 10.  And Posner and Landes go on to note that, in general, “ideology matters more” in the Supreme Court cases than it does in Court of Appeals cases.

In a 2010 article in the Missouri Law Review, Carolyn Shapiro attempts to measure, via an analysis of selective cases from the Rehnquist Court, what factors impact the “ideological salience” of a given Court decision, i.e., how predictably votes are based upon the ideological predisposition of the justices.  Shapiro doesn’t wish to overstate the role of ideology, but she does demonstrate that it is at its most predictive when a case is most ideologically “ordered.” In other words, the justices vote pretty much how outside observers would expect them to when a case is publicly prominent. So while ideology is not the only factor that points to how justices will vote, justices are prone to reach a result that matches their worldview in controversial cases.

Really, this is all almost painfully banal, isn’t it?  As Posner and Landes note, numerous studies, including their own, make the unassailable point that justices appointed by Republican presidents vote preponderantly as conservatives, and those appointed by Democratic presidents vote preponderantly as liberals.  The well-known exceptions to that rule (David Souter, Byron White) are just that — exceptions that prove the rule.

Moreover, since the early 20th century, scholars and judges have frequently noted that judicial decisions can never be separated from the politics of the nation or the politics of the judges themselves. The law is saturated in the “real life” relationships of power in which it resides.  A bald example of this came on Day 3 of the oral arguments when Justice Kennedy, in the event the individual mandate was struck down, poignantly brought up the plight of the insurance companies. Kennedy mused that, “We would be exercising the judicial power if one Act was -- one provision was stricken and the others remained to impose a risk on insurance companies that Congress had never intended. (emphasis added).”  Neither Kennedy nor his Republican-appointed colleagues commented on the “risk” that might be faced by the millions of newly enrolled health insurance recipients.

Still, we liberals hope that the power of an argument might win the day (and thus we criticize Don Verrilli, the administration’s advocate, as if he were Bill Buckner booting an easy grounder in the World Series — if he had gotten it right, we would have won!).